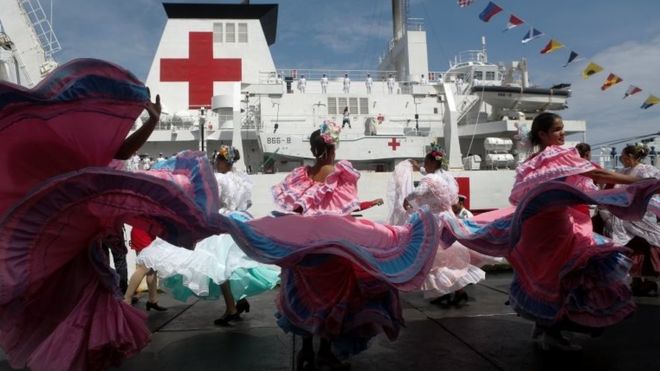 A Chinese hospital ship has docked in Venezuela, where for the next week it will provide free health care to local patients.

He said that the Peace Ark’s visit was agreed by President Nicolás Maduro during a visit to Beijing last week.

Venezuela agreed at the time to increase its exports of oil to China, which is one of its main creditors.

Venezuela’s economic crisis has led to severe shortages of food and medicines and the collapse of public services.

The opposition says the presence of a Chinese hospital ship in Venezuela shows the extent of the humanitarian crisis.

Mr Padrino López thanked China for the gesture of friendship and said that both countries would benefit.

“It is a pleasure to have this ship in Venezuela, which has arrived here after travelling to more than 40 countries” he said.

“This is how true diplomacy is done: with concrete cooperation actions,” added Mr Padrino López.

The Venezuelan government blames an international boycott led by the United States for Venezuela’s economic crisis.

On Friday, US Secretary of State Mike Pompeo promised to unveil “in the coming days” a series of actions against “Venezuelan leadership folks”.

President Donald Trump has previously called President Maduro a dictator and accused his government of illegally detaining, beating up and killing opposition activists.

Hundreds of thousands of people have fled the country over the past year, as the crisis worsened.

According to United Nations figures, 2.3 million people left Venezuela between 2014 and June 2018.

He said he had signed 28 trade and investment deals with China.

Venezuela said it would increase oil exports to 1 million barrels a day.

But there was no public statement from Beijing saying it had agreed to provide new funds to Mr Maduro’s government.