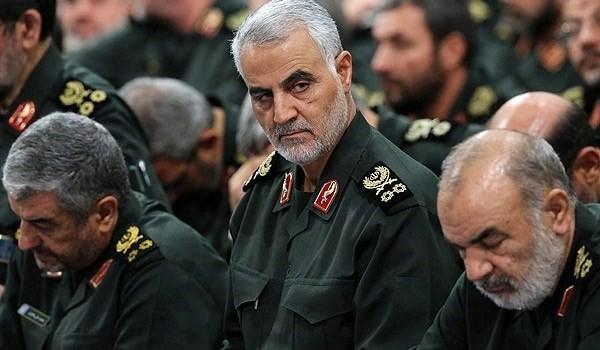 Iran’s Revolutionary Guards have vowed to crack harshly down on protests currently gripping multiple major cities across the country, now in their fifth day, and after a particularly bloody night which saw 12 demonstrators killed – some of them reportedly shot by security forces.

Iranian Revolutionary Guards al-Quds Force commander Maj. Gen. Qassem Soleimani. Image via The Iran Project
The report, though unconfirmed, originated in a Kuwaiti newspaper and is now going viral through a Times of Israel story. The Times of Israel summarizes the context as follows:

Thursday’s report by al-Jarida, which has been known to publish improbable-sounding stories about Israel, was widely picked up by Israeli media. There was no immediate reaction to the report from Jerusalem or Washington.

Three years ago, Israel came close to assassinating Soleimani near Damascus, al-Jarida quoted unnamed source as saying, but the Americans tipped off the Iranians against the background of intense disagreement between Washington and Jerusalem.

That was during the Obama administration, which, according to reports at the time, was so focused on securing the 2015 Iran nuclear accord that it chose to overlook and even obstruct efforts to clamp down on Iranian-backed terror organizations. It’s not clear if the reported tip-off was related to efforts to secure the Iran deal.

And concerning the current go-ahead for new assassination plans reportedly given by US intelligence to the  Israelis:

The source was quoted by the paper as saying that Soleimani’s assassination would serve both countries’ interests and that US authorities have given Israel the go-ahead to carry it out.

Israel has been known to conduct high-risk secretive assassinations in foreign countries over the past years and decades. One notable headline grabbing operation, reportedly by Mossad agents, occurred in 2010 and resulted in the assassination of a top Hamas commander who had checked into a high end Dubai hotel after flying in from Syria.

An eleven man Israeli hit squad had entered the hotel while dressed in tennis gear and carrying tennis rackets, and were later reported to be traveling on fake Irish and French passports. After conducting surveillance the Mossad agents got Hamas’ Mahmoud al-Mabhouh to open his hotel room door and quickly suffocated him without arousing suspicion from other hotel guests. By the time the body was discovered, the assassins had flown out of Dubai to various locations around the world and were never seen again.

And in 2015 a secret document revealed by The Intercept as part of the Edward Snowden leaked NSA archives confirmed that Israeli agents had assassinated a top Syrian general and personal aide to President Assad in 2008 while the general dined at his family home near Tartus, along the Syrian coast. The daring operation involved Israeli naval commandos and snipers targeting Gen. Muhammad Suleiman’s house from the waters of the Mediterranean and shooting him in the head and neck. Israel considered him responsible for coordinating weapons and supplies between Iran and Lebanese Hezbollah, as well as overseeing an alleged nascent nuclear development program at Syria’s Al Kibar facility which had previously been bombed by Israeli jets.

Leaked Top Secret NSA cable published by The Intercept in 2015 confirming the Israeli assassination of a top Syrian general.

Six months prior to Syrian General Suleiman’s murder, a top Hezbollah officer was killed by a joint CIA-Mossad operation in the heart of Damascus. According to former intelligence officials who confirmed the assassination plot to the Washington Post, a car bomb planted near a Damascus downtown restaurant instantly killed Imad Mughniyah – Hezbollah’s international operations chief who was believed to have masterminded several terror attacks targeting Americans.

So concerning these latest reports unconfirmed reports that Iran’s Qassem Soleimani might be in Mossad’s crosshairs, while such a high risk operation against a top Iranian official would be unlikely to succeed, it is certainly not without precedent.

share on Facebookshare on Twitter
“Vivir en Piedad”, the book of the son of Piedad Córdoba
New Orleans Louisiana