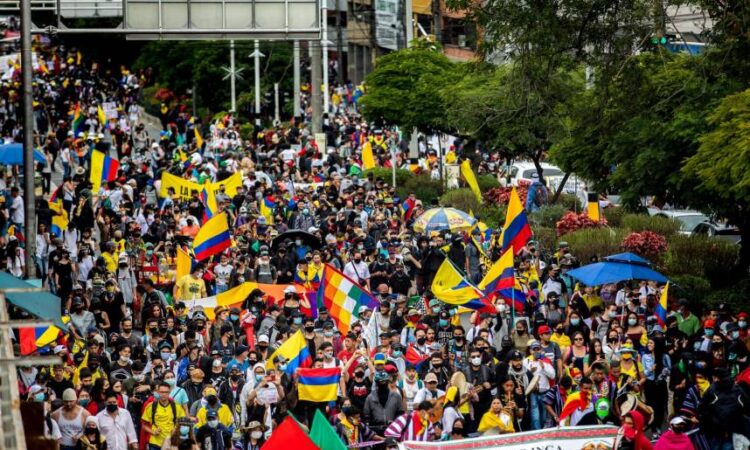 The report documents various instances of unnecessary or disproportionate use of force by police officers during widespread demonstrations that began on 28 April and continued for several weeks.

The protests were part of a national strike against the country’s long-standing economic and social equalities, many of which were worsened by the COVID-19 pandemic.

During the period from 28 April to 31 July, OHCHR’s office in Colombia received more than 60 allegations of deaths in the context of the protests.  So far, it has verified the deaths of 46 people: 44 civilians and two police officers.  Most of the documented deaths, 76 per cent, were from gunshot wounds.

The Colombia office conducted more than 620 interviews with victims and witnesses, and examined 83 videos, including mobile phone footage of the protests and related incidents.  Staff also held some 878 meetings with government officials, civil society representatives and protestors.

Based on this analysis, there are reasonable grounds to believe police officers were responsible for at least 28 of the deaths, the report said, with members of the National Police’s Mobile Anti-Riot Squad (ESMAD) involved in at least 10.

Non-State actors are believed to have killed 10 people, while there is insufficient information to determine the likely perpetrators of eight further deaths.

Some 60 reported cases of sexual violence allegedly committed by the police, are also included in the report. So far, 16 have been verified by OHCHR.

Disproportionate use of force

The report details instances of unnecessary or disproportionate use of force by police officers, especially ESMAD members, to disperse peaceful protests and blockades. Armed individuals also attacked and fired on demonstrators without the security forces intervening.

OHCHR underlined the importance of law enforcement officers abiding by principles such as legality, precaution and necessity, when policing demonstrations, with firearms only used as a measure of last resort when there is an imminent threat to life or of serious injury.

All those reportedly involved in causing injury or death, including State officials, should face prompt, independent, impartial and transparent investigations, while victims should be ensured the right to full reparation.  Steps taken so far towards investigation and prosecution have been welcomed, according to the report.

The report also underscored the State’s responsibility to protect human rights without discrimination, and obligation to facilitate people’s right of peaceful assembly, concluding that Colombia failed to maintain a safe environment for protesters on several occasions.

Another concern was the degree to which protestors were criminalized and stigmatized, including by the media linking them to vandalism or even alleging acts of terrorism, OHCHR said.  Human rights defenders and journalists were also attacked during the protests.

The report also documents violence and damage by some protesters and other individuals, which OHCHR has consistently condemned, though noting that the majority of the protests were peaceful.

It further details areas where investigations into alleged human rights violations have made progress, and welcomes the Colombian Government’s stated zero tolerance of violations by security forces.

Under lessons learned is a recommendation for the authorities to take action to ensure those in charge of managing protests, particularly the National Police, only resort to dispersal measures which are strictly in line with international human rights norms and standards.

Noting Government reform proposals, the report calls for a broad national debate on police reform, including potentially transferring the force from the Ministry of Defence to civilian control, and improving internal oversight and accountability mechanisms.