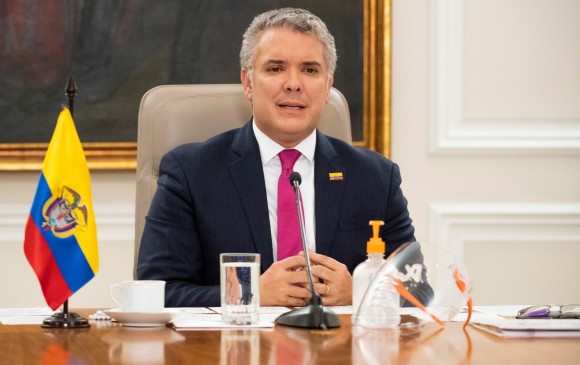 Colombian President Iván Duque believes the missing ingredient in the Western Hemisphere’s response to the pandemic was multilateralism, and an accelerant in the virus’s spread was populism.

“In truth, the lesson we’re left with after COVID-19 is we needed more multilateralism to confront this crisis,” Duque said in an exclusive interview with The Hill.

“Our first conviction: We will make decisions based on science,” Duque added.

Colombia has been hard hit by the crisis, turning a year that started with a projected 4 percent GDP growth into an economic wash, with government spending driving up debt to finance the pandemic-led shutdown.

The 43-year-old lawyer, who spent the bulk of his professional career in Washington, said COVID showed the strength of a science-based, multilateral approach to government.

He described the decision to freeze a bustling economy as “maybe the hardest decision we’ve made.”

“But what I never doubted was that in that moment we had to do everything, everything, first to slow down the virus’s exponential spread, second to protect the health care systems, third to protect lives, and obviously to start, based on science, a process of reactivation,” Duque said.

If Duque tacitly raises an eyebrow to the American approach to coronavirus, he explicitly embraces American leadership in the region, a strategy that has served Colombia well for two decades.

Duque did not name-check other regional leaders who shunned a technical approach to combating coronavirus, with the exception of Venezuela’s Nicolás Maduro, whose open disregard for democratic norms has turned him into the region’s pariah.

Duque said Maduro’s dictatorship “is the biggest hemispheric challenge in terms of protection of democracy.”

“It’s an oprobious dictatorship and an expression of tyranny which knows no limits,” said Duque. “He has assumed all powers, destroyed the economic apparatus, has ended liberties, destroyed freedom of the press, destroyed free enterprise, and above all, has entrenched at the head of power a group of narco-traffickers who today are sought as criminals by U.S. authorities.”

Colombia is Venezuela’s closest neighbor — Venezuela’s border with Brazil is technically longer, but traverses mostly remote mountain and jungle areas — and has led regional opposition to Maduro, a top foreign policy priority of the Trump administration.

To that aim, Colombia joined the United States supporting the reelection of Organization of American States (OAS) Secretary General Luis Almagro in March and now supports the candidacy of National Security Council (NSC) Senior Director for the Western Hemisphere Mauricio Claver-Carone to become the next president of the Inter-American Development Bank (IDB).

The IDB, where Duque worked for more than a decade, has traditionally been led by a president from Latin America, and a U.S. executive vice president.

Claver-Carone’s nomination to lead the bank by President Trump caused some in the region to cry foul, arguing Trump would use the bank’s economic clout to further his political goals in the region.

“First let’s talk about the bank’s institutions. The bank has no prohibition in its Articles of Agreement for a national of any member nation to present their candidacy,” said Duque.

“In second place, I also think it’s important that some sort of historical political agreement existed, where the presidency went to Latin America and the executive vice-presidency to the United States, but I don’t find it inconvenient to renew that agreement, because those agreements need to be renovated,” he added.

Duque touted Claver-Carone’s accomplishments and the regional relationships he’s built as head of Western Hemisphere for the NSC, where he’s spearheaded the Trump administration’s Venezuela policy.

And Duque pointed out that an American president could help move forward re-capitalization of the bank, which has not happened in 11 years, when Duque was among the negotiators who worked on capitalization.

“The bank has been falling behind amid the needs of Latin America, and much farther behind than the needs for the reactivation after the pandemic,” said Duque.

“Many countries have complained for some time because they say that capitalization hasn’t happened because there’s been some distance on the part of the Department of the Treasury,” he said.

Duque added that the United States owns 30 percent of the bank and hosts its headquarters in Washington.

“[If] the United States wants to preside for a period to inject capital and respond to Latin America, I find it clear proof that the main stockholder at this time wants to help create a positive transformation in the bank,” said Duque.

Because of Colombia’s unapologetic pro-American stance, it’s become harder for the country to maintain its diplomacy of positive “bipartisan, bicameral” relationships amid increased division and political rancor in the United States.

“Colombia is now the most dangerous country in the world for human rights defenders,” wrote McGovern.

Duque, who was largely elected based on opposition to the manner in which his predecessor, former President Juan Manuel Santos, negotiated and began implementation of the accords, first saw the letter as politics.

“First of all, we’re in the middle of an electoral process in the United States, so it’s a time for letters, for speeches for commentary, and I understand that,” he said.

But Duque then adopted a litigator’s bearing, listing specific clauses of the agreement that his administration fulfilled in 24 months in office, and that Santos’ had not advanced on in 20 months since signing the accords.

Duque noted he denounced the assassinations in his inaugural address and had worked to combat them, adding that FARC leaders had not fulfilled their agreements to inform on their connections to drug cartels and reveal locations of murdered kidnapping victims.

Duque expects Colombia to remain the United States’ closest ally in the region, regardless of political comings and goings in either country.

And despite the break between his administration and his predecessor’s, Duque has followed through on the country’s pre-existing commitment to multilateralism and regional diplomacy.

Colombia is due this year to take over the presidency of the Pacific Alliance — an association of Colombia, Chile, Peru and Mexico — and recently became a full member of the Organization for Economic Cooperation and Development (OCDE).

“I’ve always said that the world today, rather than divided between left and right, I believe the world today has demagogues and pedagogues,” said Duque.

“The demagogues often end up driving their countries into bread for today, hunger for tomorrow. Those of us who want to be pedagogues must be capable of transmitting to the citizens what challenges we face, what the truth is, and how we’re going to get through it,” he added.

Tags :Iván Duque
share on Facebookshare on Twitter
How Iceland Beat the Coronavirus
This Argentinian paralympic swimmer has built his DIY pool with plastic bags