HomeLiveThe Battle for Venezuela, Through a Lens, Helmet and Gas Mask
Live

The Battle for Venezuela, Through a Lens, Helmet and Gas Mask 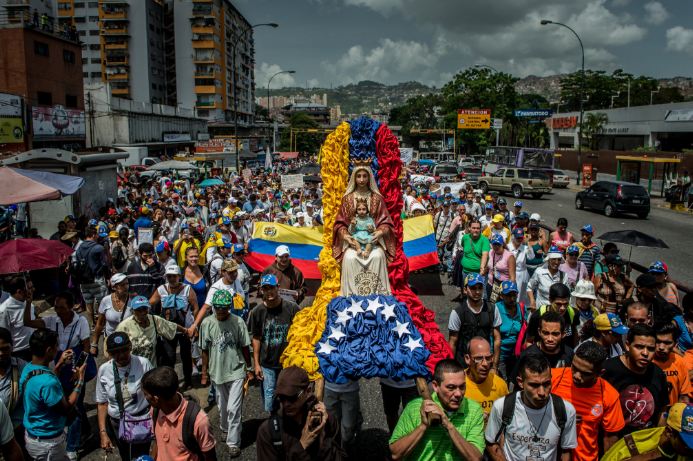 An uprising is brewing in Venezuela.

Nearly every day for more than three months, thousands have taken to the streets to vent fury at President Nicolás Maduro and his increasingly repressive leadership.

These confrontations often turn into lopsided and sometimes lethal street brawls — more than 90 people have been killed and more than 3,000 arrested. 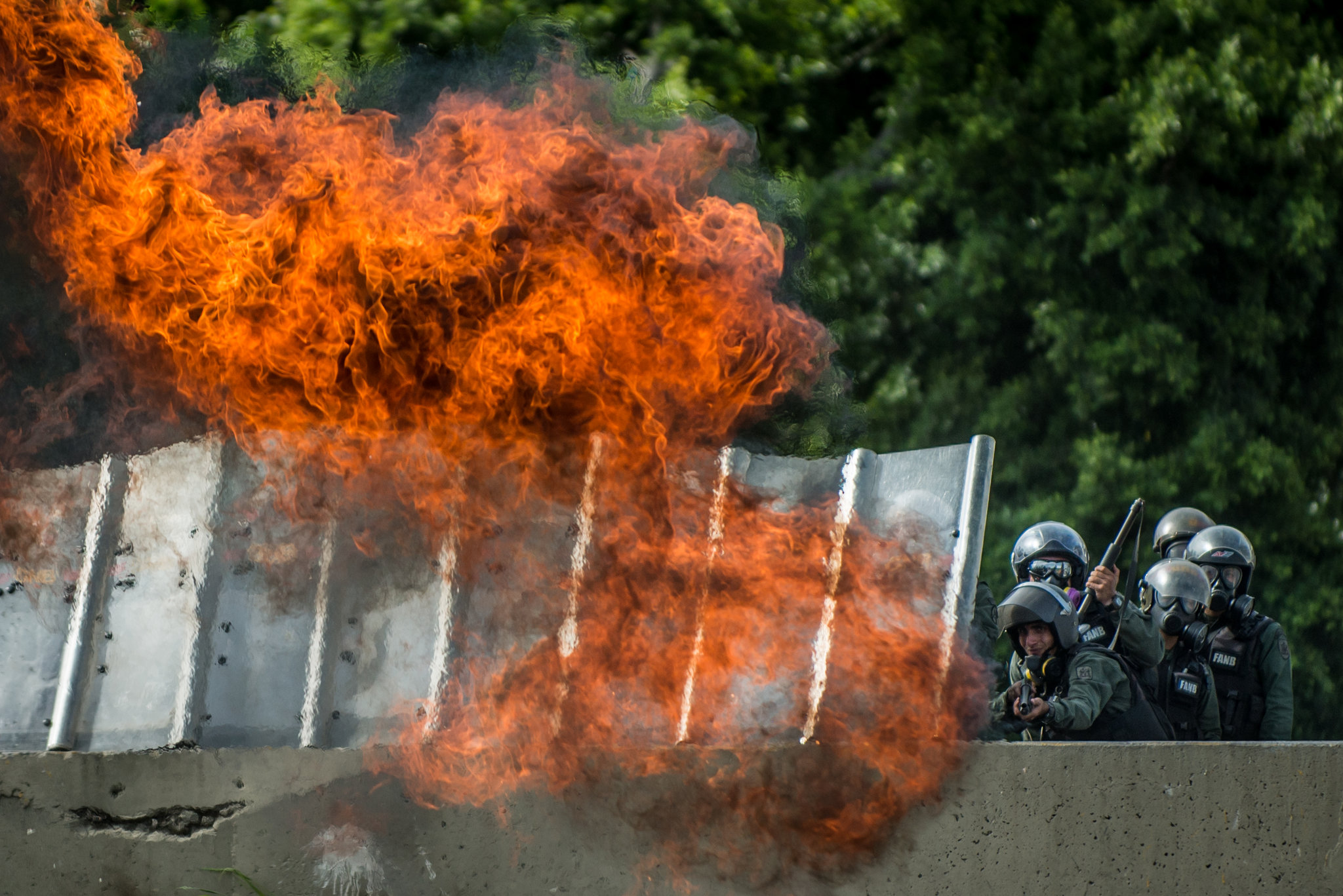 I have worked as a photojournalist for The New York Times in Venezuela for nine years, and for the past two have focused on the plight of Venezuelans struggling with the worst economic crisis in the country’s history.

I have witnessed their growing anger as food and medicine disappear and Mr. Maduro’s authoritarianism intensifies.

His government has delayed elections while jailing protesters and political opponents. Now he has called for a new constituent assembly to be elected at the end of the month, empowered to rewrite the Constitution, which many Venezuelans have called a blatant power grab and threat to their democracy.

Mr. Maduro has called the protests a violent attempt to overthrow his government. Demonstrators say they are invoking their right to rebellion against tyranny, guaranteed by the Constitution he wants to revise. 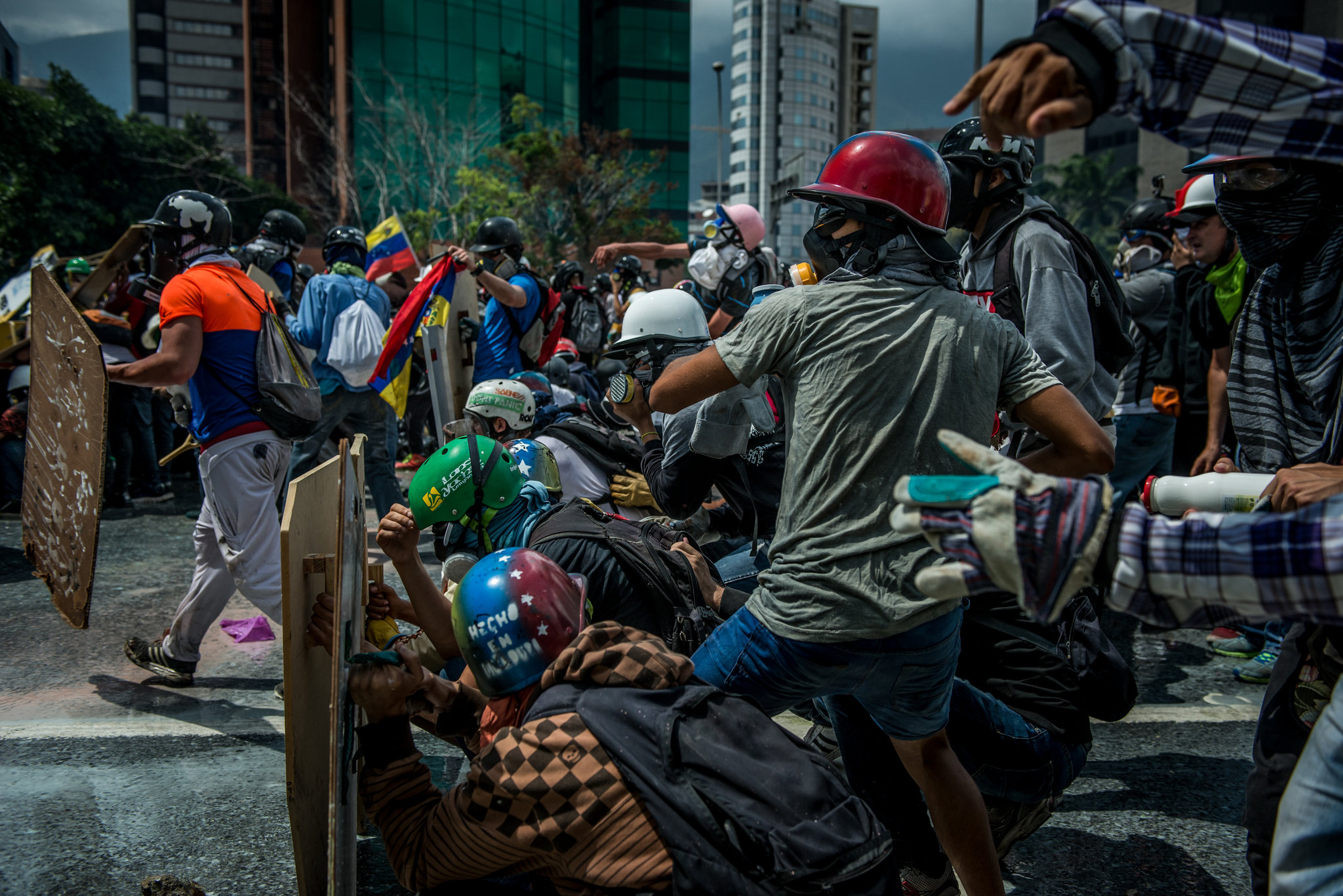 Protesters hurled stones and firebombs during a clash with security forces on the Francisco Fajardo Highway.CreditMeridith Kohut for The New York Times

I often start my day now hopping onto a motorcycle taxi and heading to the front lines where the tear gas is wafting and the projectiles are flying.

I’ve come to know some of the regular protesters, like Tyler, 22, a former government supporter who has become adept at dodging rubber bullets and buckshot behind a homemade shield painted blue, yellow and red to match the Venezuelan flag knotted around his neck. His eyes peek from the black T-shirt wrapped around his face to hide his identity.

We sat beside a burning barricade during a lull and he told me about his family.

Tyler said he was fighting because of medicine shortages that killed his mother, worsened his grandmother’s high blood pressure and left his asthmatic little sister gasping. He said his family could afford only one meal a day, usually just plain white rice.

“We are living with a hunger that we have never had before,” he said. “Things are already really ugly here, and we won’t take it anymore.” 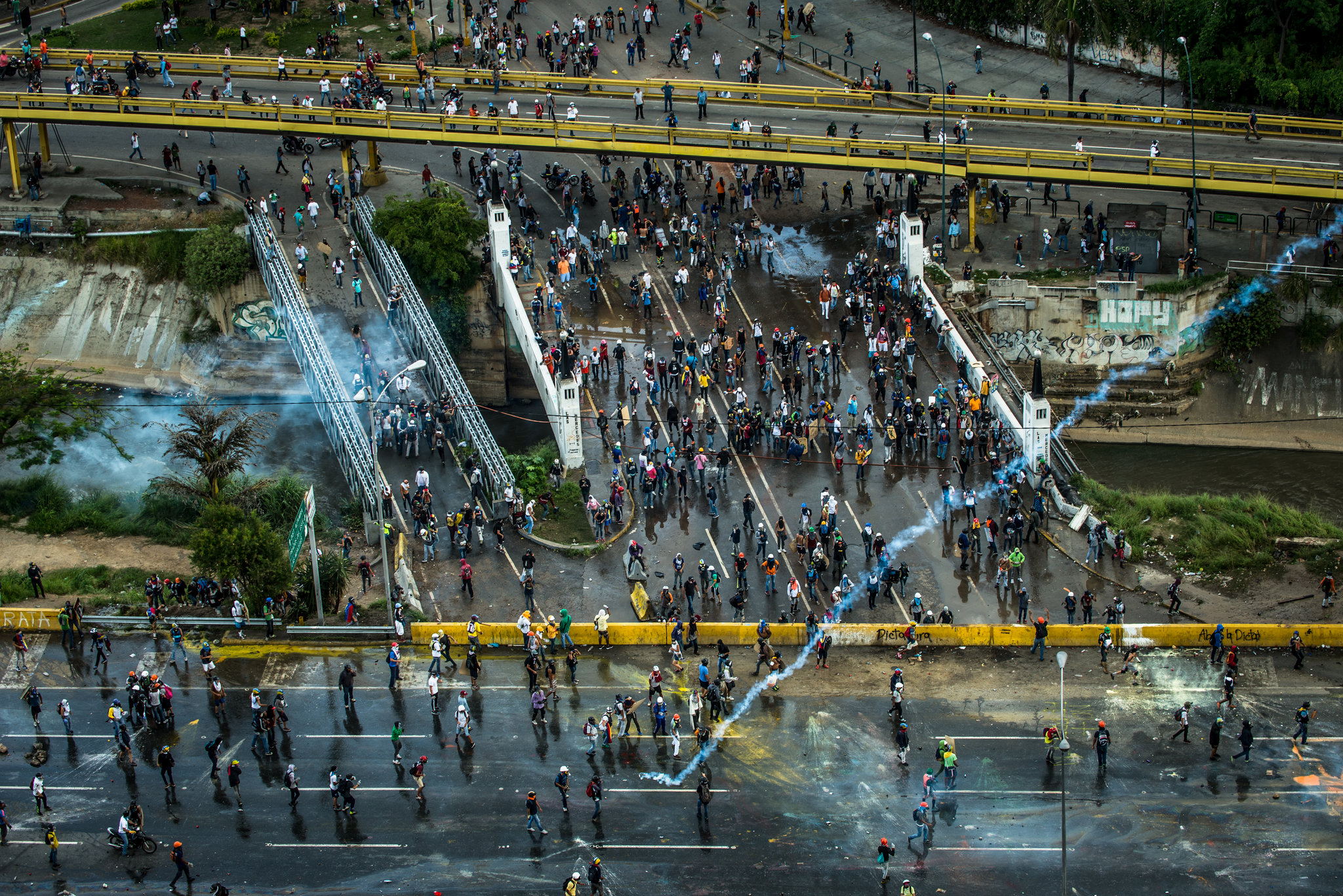 The Francisco Fajardo Highway was overrun with protesters during a demonstration in May.CreditMeridith Kohut for The New York Times

Members of La Resistencia say taking to the streets is the only option left.

“If they don’t kill us here protesting, we will die either way — be killed for a cellphone or a pair of sneakers — or we will die of hunger, or die simply from catching any disease because there is no medicine here,” said Marco, a graduate student.

I feel as if I am inside a video game when photographing the front lines — constantly skipping over obstacles and dodging projectiles whizzing from all directions. Dozens of antagonists get hit during each protest, some evacuated with broken bones and bloody wounds. 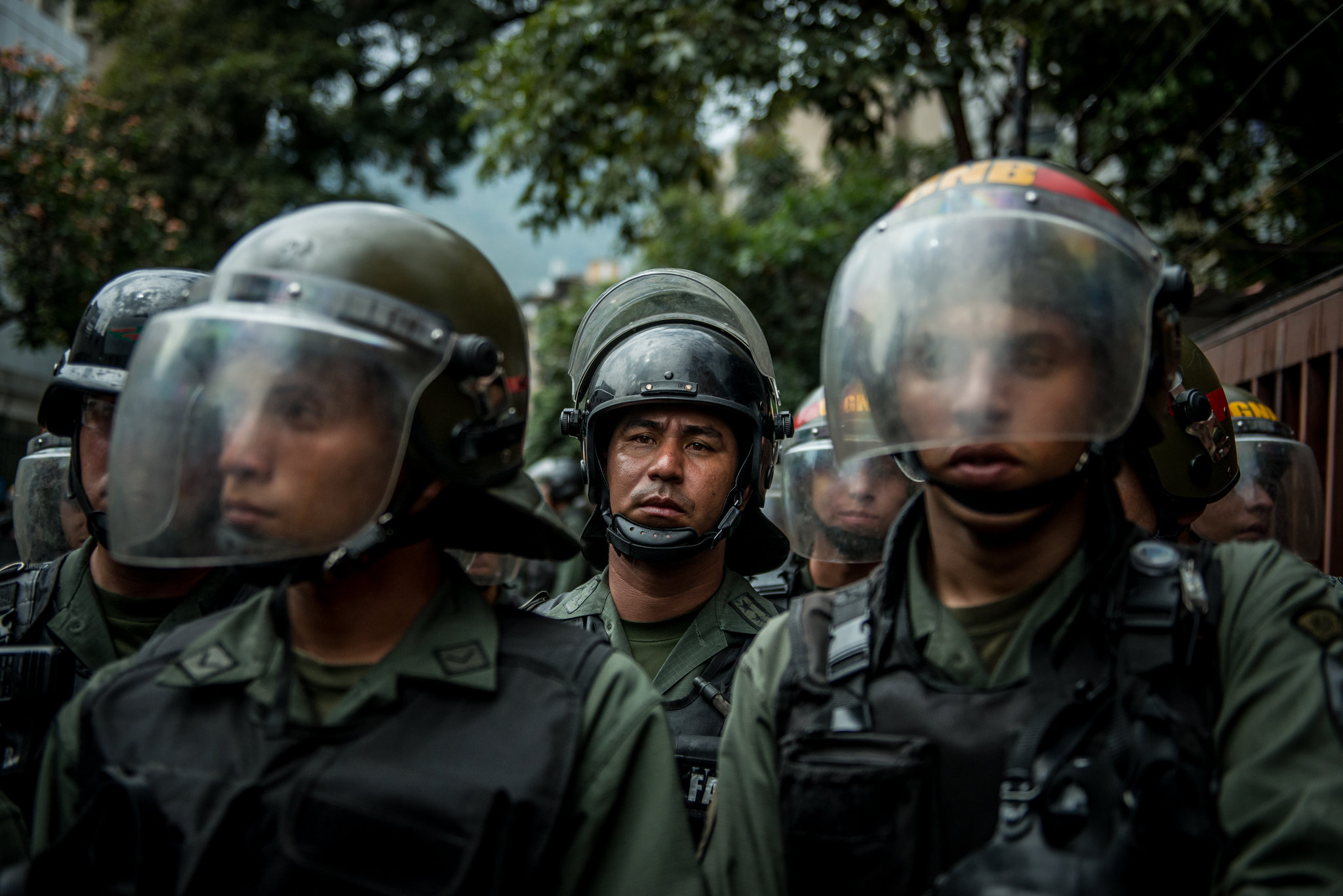 Unfortunately for the press corps, both sides have less-than-perfect aim. We are frequently pelted with rocks, paint and water cannons. I took a buckshot blast to the helmet from roughly 15 yards that gave me a concussion. Many photographers have fared worse, hospitalized with serious injuries.

Security forces regularly target journalists, beating and arresting them, smashing or seizing their cameras. More than 200 “acts of aggression” against journalists have been reported since the protests began.

They have beaten captured soldiers and police officers and burned their motorcycles. They also have committed mob vigilantism. 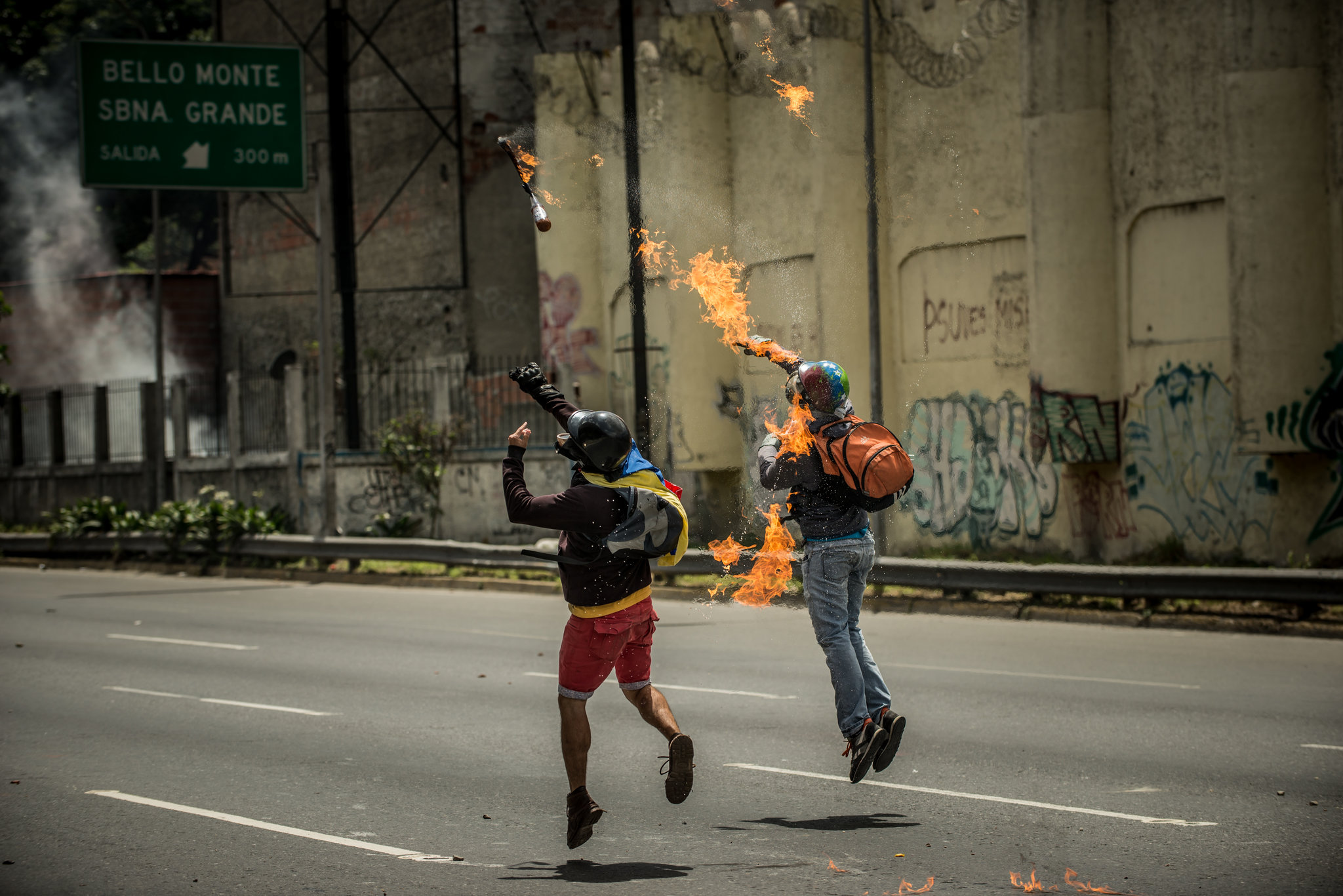 Members of La Resistencia see themselves as modern-day freedom fighters.CreditMeridith Kohut for The New York Times

When a man was accused of stealing during a protest, Resistencia members punched and stabbed him, doused him with gasoline and set him afire. The man, Orlando Figuera, died days later.

When armored military vehicles aim water cannons to disperse protesters, Resistencia members sometimes fire back with giant slingshots, manned by four people each. Their artillery rounds are baby-food jars full of paint or even human excrement.

“It’s nasty,” one protester said, “but everyone has it, and most important, it’s free.”

The protesters also improvise to protect themselves. Some turn swim goggles and plastic soda bottles into makeshift gas masks, and create shinguards from old magazines and duct tape.

Others have fashioned armor from carpet scraps to thwart rubber bullets and buckshot, lethal at close range. More than 30 protesters have died this way, according to a tally by local journalists.

“Don’t knock it,” one protester said with a grin when asked about his carpet vest. “It has already saved me several times.”

Many carry homemade shields of wood and old oil drums. Some are adorned with Venezuelan flags, cartoons of Mr. Maduro burning the Constitution or phrases like “freedom, future, elections now!” and “I love you, mom.”

Members of La Resistencia are generally young and say they support neither the government nor the opposition politicians. Some are middle-class university students who fight with cameras affixed to their skateboard helmets to update their Instagram pages. 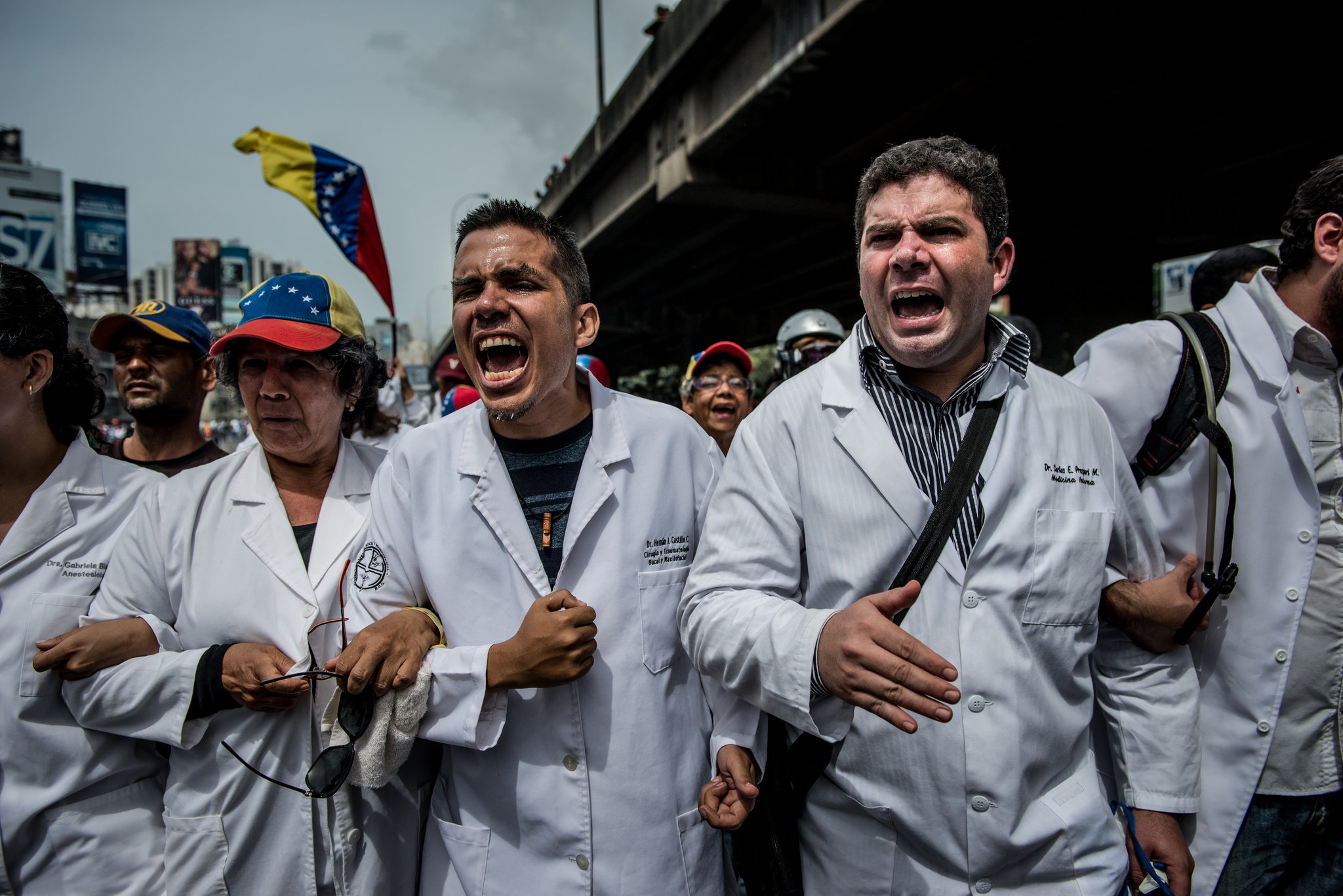 Thousands of doctors and other health care professionals marched in May to protest medicine shortages.CreditMeridith Kohut for The New York Times

During the March for Health, thousands of doctors, nurses and patients protested the crippled public health system. They held signs made from empty drug boxes with messages like “S.O.S.” and “without medicine, they’re also killing us.”

When soldiers used tear gas on them, doctors in white lab coats locked arms — gagging with tears streaming — but refused to budge.

In another march, Catholic priests, nuns and other religious protesters carried a large Virgin Mary decorated with the national flag. A nun in white carried a sign with the line from Scripture, “We must obey God rather than men.”

At the March of the Empty Pots, families banged on cookware to protest food shortages and soaring prices. A recent poll found that 90 percent of Venezuelans say they cannot afford the food they need. 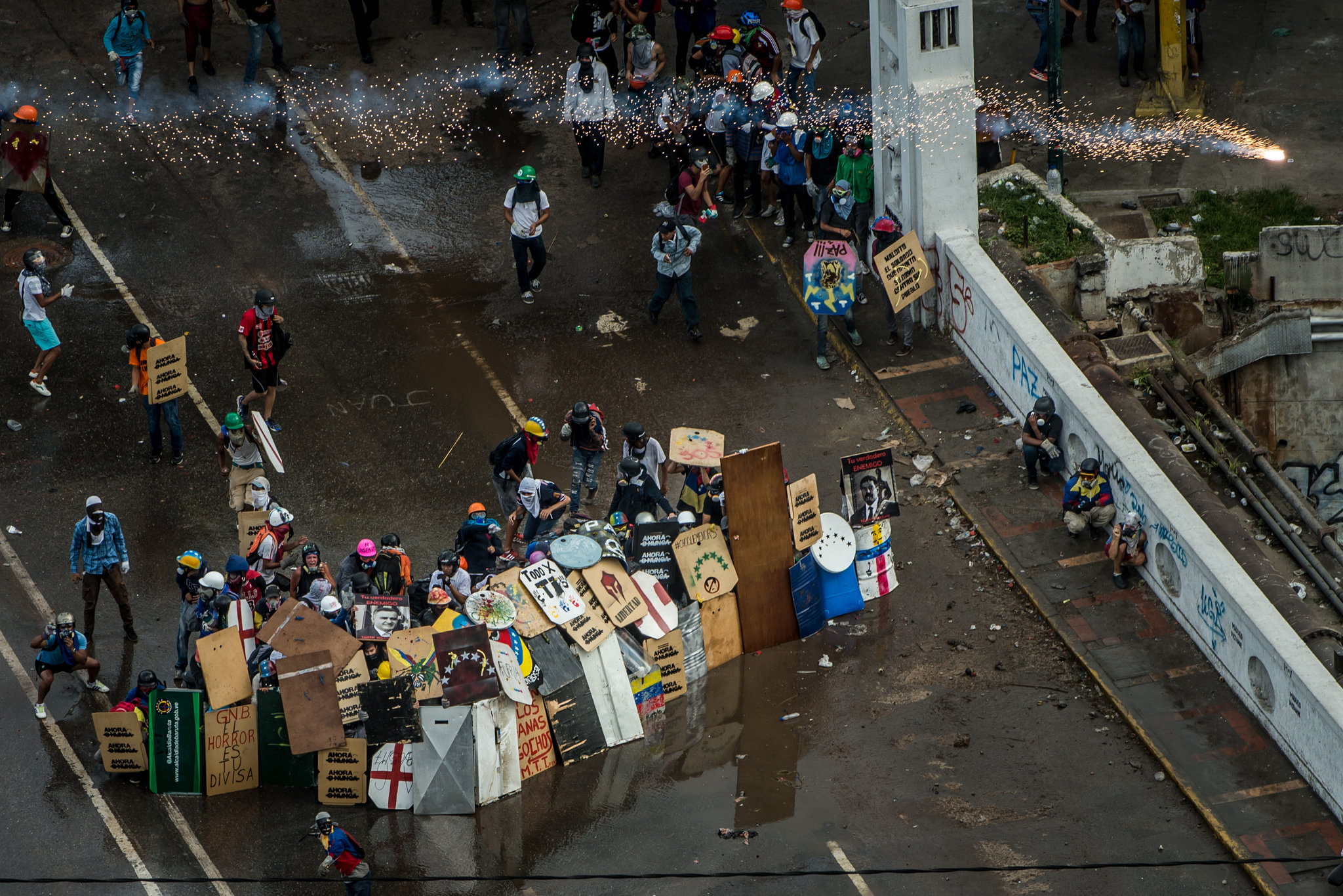 Protecting themselves with shields fashioned from wood and old oil drums. CreditMeridith Kohut for The New York Times

Gustavo Misle, 80, a retired university professor, regularly attends the protests holding an old Halloween skeleton cutout repurposed with a sign, “I am hungry.”

He once ran a nonprofit that fed homeless children. Now he and his wife survive on bananas. Inflation has ravaged his monthly pension, worth only a few dollars.

The homemade protective gear is no guarantee of safety. Neomar Lander, 17, was wearing a carpet vest when he died on the front lines. Comrades placed candles around the bloodstained spot where he fell, keeping vigil until late into the night.

Johan Caldera, a friend of Mr. Lander’s, said he was even more determined to protest.

“Now, I have no fear, because I already lost the fear I had, and the respect for the military,” he said.

“The real soldiers of Venezuela wear rags on their faces,” he said. “They don’t use grenades — they use stones.”

Many Resistencia members wear T-shirts resembling the uniform of Simón Bolívar, who led the rebellion for Venezuela’s independence from Spain. They sometimes plead with soldiers to join them, quoting Bolívar: “When tyranny makes law, rebellion is a right.”

Wuilly Arteaga, 23, a violinist who became a symbolic figure in the protests for playing the national anthem at the front lines, cried when the police broke his violin. Videos of Mr. Arteaga in tears went viral. He was flown to the United States, where two prominent musicians, Marc Anthony and Oscarcito, gave him a new violin.

After a day of clashes, hundreds of soldiers retreated, their ammunition exhausted. Members of La Resistencia celebrated as they retook the main highway, raising their fists and singing the national anthem.

The government calls Resistencia members terrorists and has threatened a more muscular military response. “If Venezuela was plunged into chaos and violence and the Bolivarian Revolution destroyed, we would go to combat,” President Maduro said.

At the vigil for Mr. Lander, a fellow Resistencia member squatted, his Converse high-tops touching the spot where Mr. Lander was killed, and vowed to stay in the street until the government falls.

Staring into my camera, he had this message for the president: “Take a good look at my face, because I am not afraid.”

share on Facebookshare on Twitter
The civilized world wants to end the carnage in Venezuela, but Cuba is the author of the barbarism
A computer was asked to predict which start-ups would be successful. The results were astonishing