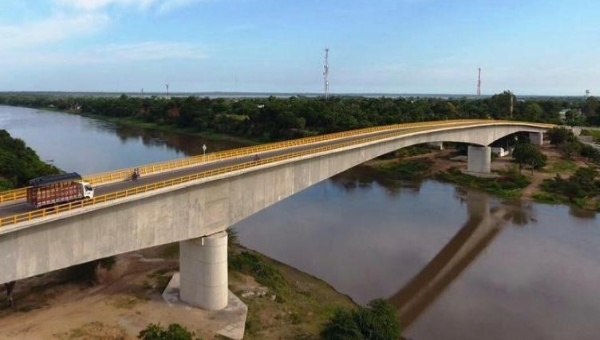 The latest completions also include a new, two-lane bypass around La Pintada (enabling travelers heading to or from Bolombolo to avoid the knotted city center) and 15 new bridges along the route, according to ANI.

Thanks to the latest upgrades, “Pacífico 2 highway has now completed two of five functional units and has achieved a total progress of 65%, which is 9% ahead of schedule,” according to ANI.

The entire “Pacífico 2” project – estimated for completion around mid-2020 — is budgeted at COP$1.6 trillion (US$517 million) including 42.5 kilometers of new roads, 2.5-kilometers of tunnel-ways (including the pioneering Tunel de Mulatos), 54 kilometers of rehabilitated roads and 43 bridges, the agency noted.

“Among the works that will be ready this year are the new bridge over the Cimitarra River, which has an approximate length of 230 meters, as well as 30 kilometers of new road in the Cantagallo-San Pablo sector (Bolívar) and the completion of a second road in the Montería-El Quince sector (Córdoba),” according to ANI.

“With the transversal, the quality of life of the inhabitants of the regions of Magdalena, Antioquia, Córdoba, Bolívar, Sucre and Cesar improves,” the agency added.

Connecting roads along the transversal will cut travel times to Urabá, Apartadó-Carepa and Currulao-Reposo, including a new, 26-kilometers-long section built in the sector of Turbo-Chigorodó, due for completion in July, according to ANI.

The entire TdA project includes a connecting highway of 38.6 kilometers in length; another 138-kilometers-long stretch of new, two-lane road including two vehicular bridges over 200 meters in length; the 511-meters-long Talaigua Nuevo bridge; the new Cimitarra River bridge (still under construction); and rehabilitation of existing roads along the route, according to ANI.

“In addition, it is expected that, along with projects such as the Túnel del Toyo and the Autopistas al Mar 1 (Medellín-Santa Fe de Antioquia-Cañasgordas-Santa Fe de Antioquia-Bolombolo) and Mar 2 (Cañasgordas-El Tigre- Necoclí), the Transversal de las Américas will contribute to reducing travel time in the Medellín-Turbo logistics hub from seven to four hours,” according to ANI.