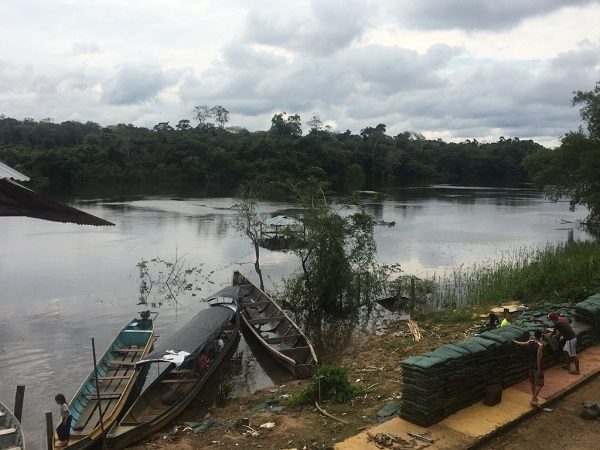 Accessible by air and river, Miraflores is an island in the forests of southern Colombia that is home to thousands of hectares of illicit crops as well as the dissident 1st Front of the demobilized FARCguerrilla group.

With a clandestine airstrip and favorable geography, the municipality has become the drug trafficking capital of the department of Guaviare. But to understand the growing dissidence, one must get to know Miraflores.

A dense forest prevents any legal economy from prospering. And the Vaupés River, used to transport the coca base produced from 2,297 hectares of cultivated coca, makes the area an ideal center of operations for some 400 dissidents of the 1st Front of the Revolutionary Armed Forces of Colombia (Fuerzas Armadas Revolucionarias de Colombia – FARC).

For several generations, the group has recruited Miraflores locals, to the point that those without relatives in the guerrilla ranks are few. The Vaupés River, which crosses Miraflores and runs through Carurú and Mitú in the department of Vaupés before arriving in Brazil, acts as a super highway supplying both Latin America’s biggest drug market and the main transit point for cocaine headed to Europe, Africa and Asia.

Stepping across the sandy, unpaved runway, as suitcases are unloaded, passengers here barely have time to work out where they are. But while the airplane is loaded again and the sound of engines signal its take-off for the departmental capital, San José del Guaviare, a feeling of uncertainty comes over those who have just arrived.

“You feel abandoned, not knowing if that plane is going to come back,” said Treasury Secretary Carold Andrea Cárdenas Rojas, who is not a local but has worked here for some time.

The runway, which was constructed more than 30 years ago, remains intact, anchored in another time. But unlike in the 1990s, when planes landed every half an hour, full of people searching for rubber, animal pelts and coca, now, just two small planes land twice a week. All that is left from those times are memories, and the brave Miraflores residents who insist on staying.

(The town hall of Miraflores)

Meters from the runway stands the town hall, which, unlike the rest of the town’s houses made of wood, is made of cement. Those who work there almost unanimously denounce the historical absence of the state and the lack of investment the municipality has received from the central government.

“Miraflores was taken by the guerrillas. Public forces and government functionaries were displaced, and the mayorship functioned from Villavicencio. The state abandoned Miraflores in 2002. When it returned, girls had already given birth to the children of guerrillas, children had left their mothers for the guerrillas, and women had guerrilla husbands,” Government Secretary Edwin Díaz told InSight Crime.

From then until now, the men of the FARC‘s 1st Front have not abandoned the territory. The thick jungle that surrounds the municipality has made Miraflores into the place where they feel the most secure. Although the weapons have been silenced, the spirit of the war never left the streets.

In August 2016, guerrillas handed out flyers saying they would not welcome a peace agreement with the government, which was then in the final stages of being negotiated. The townspeople have known since that time that nothing was going to change. Whereas the FARC have now declared themselves a political party, and their leader Rodrigo Londoño Echverri — better known by his guerrilla alias “Timochenko” — is aspiring to the presidency, the dissidency continues to expand. The guerrillas are sending commissions from Miraflores to the nearby departments of Meta, Caquetá, Vichada, Guainía, Vaupés and even to neighboring Venezuela, extending their tentacles and reconnecting with other factions of the FARC who are growing ever more disillusioned with the peace process.

The local community has seen this, and although the government has promised to get rid of the dissidents, they are getting stronger rather than weaker.

“The government has a new idea, which for me, is not just mistaken but dishonest and absurd,” said an official, who due to the delicate nature of the issue wishes to remain anonymous. “Before the process the 1st Front controlled Calamar, Miraflores and the Vaupés River. But now, after the agreement, they are in control of the same places, as well as San José del Guaviare, parts of Meta and Vaupés. People from the 7th and 44th Fronts and other places in the country arrived to the front. I’ve calculated that in this group, between Calamar and Miraflores, there should be around 400 people, not 120 like the government says.” 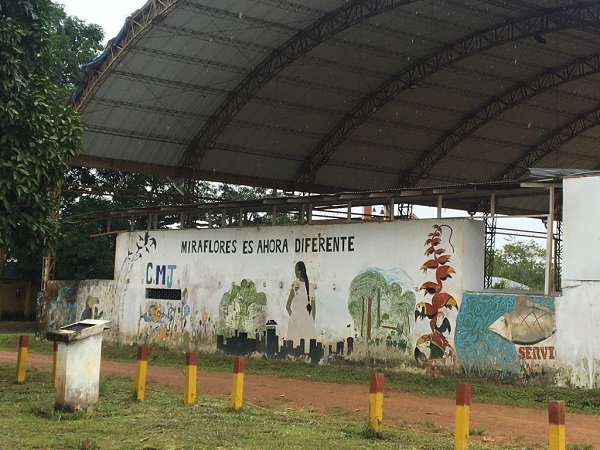 (A recreation center in Miraflores)

Dissidents can be found across the territory, but they are mainly concentrated in the community of Barranquillita, where a UN official was recently kidnapped. In Barranquillita, there are no police, no military, no institutions exerting authority. All control is reserved for the rebels who did not accept the peace process.

“At Easter they decreed a curfew, which banned movement of people, including the army,” said a local indigenous leader.

“I say to the army that there’s no need to blame a boy who wants to join the guerrilla, because this boy grew up in Miraflores when there was no army or police. He grew up learning that the [security forces] were the bad ones,” Diaz explained.

It is not surprising that sources who spoke to InSight Crime confirmed that Néstor Gregorio Verá Fernández, alias “Iván Mordisco”; María Eugenia Velasco, alias “Carolina,” the current head of the Mass Organization Commission; and even Luis Alfonso Lizcano, alias “Euclides Mora,” the commander of the FARC‘s 62nd Front, are now based in the municipality.

“I don’t know why the government wants to dress up reality, that’s what they did 52 years ago,” said a town hall official. “They saw some peasants arming themselves in Marquetalia and they said they were ten crazy people, but then afterwards they realised that they were uncontrollable. Here what’s happening is exactly the same, they are letting a group grow which has experience, which knows the routes, which already knows how to operate, because they think they are in the middle of nowhere in the jungle.”

Drug dealing is, in fact, one of the most lucrative economies for dissidents. Unlike in other municipalities in the country, in Miraflores, coca keeps its price. One kilogram of coca base is worth around 2,000,000 Colombian pesos ($682).

With the exception of the town officials, the vast majority of the municipality’s residents live off processing of the plant. Coca harvesters receive four or five grams of coca base per harvest. In this rural area, this is the currency with which to buy food, clothing and any other commodity.

Coca remains the flagship product in every community of the municipality, except for La Guarapa, the only one without illicit crops. Although other small crops are grown for self-consumption, so far there is no alternative more profitable than coca.

“Miraflores is extremely special because it keeps the 1st Front breathing,” a community leader told InSight Crime. “The cruellest thing is its geography, which makes it impossible for any legal economy to prosper.”

In addition to coca, there is one business that is equally or potentially even more lucrative: extortion.

The boats that transport the coca base other commodities come from the town of Calamar, and travel on the Unilla River to Barranquillita. From there they continue their journey on the Vaupés River until they arrive at the departmental capital Mitú. Dissidents are located at strategic points along the river, and for each ton of normal cargo, they charge 200,000 pesos ($65). For each crate of beer, the rate is 5,000 pesos (about $1.60), and for each barrel of gasoline, it’s 50,000 pesos (about $16).

“Here everyone pays extortion money, even myself indirectly,” a member of the security forces told InSight Crime.

(The Vaupés River, used to transport coca base)

If one considers that some 3,000 tons of cargo pass through the river monthly, and that all of this traffic pays extortion money, the dissidents are earning approximately 600,000,000 million pesos ($205,000) each month.

Farmers and contractors also pay “protection” fees. Not even the municipality itself has been able to avoid the extortion, given that any contract must pay 4 percent of its total value in order for it to be carried out, according to sources consulted by InSight Crime.

With extortion and the recruitment of minors for the FARC dissidents, the conflict continues to affect the daily life of all Miraflorense families. Between August 2016 and July 2017 at least 50 minors were recruited, though the majority of these cases were not reported.

A religious leader who hosted a minor who had recently escaped, said that the minor had estimated that in Miraflores alone, some 150 children may be among the ranks of the dissident guerrillas.

“He expressed to me that there are about 150 recruited minors who are receiving training,” the source told InSight Crime. “He told me that on days when they slept in hammocks, in huts or on the floor, that it was comfortable for one or two nights, but that there is nothing like the comfort of a bed. Now, the commanders harass them a lot in terms of work and obtaining results. So he got tired [of it].”

The forced recruitment of minors has been reported in the communities of Caño Tigre, Barranquillita, Lágrimas, Puerto Vieja, Lagos del Dorado and in the urban center. However, the exact number of recruited youths is unknown, because teachers, often the first to notice, are too scared to report it.

There are reports that the dissidents have visited schools, using propaganda to attract children. Given the lack of other opportunities, many decide to join them. 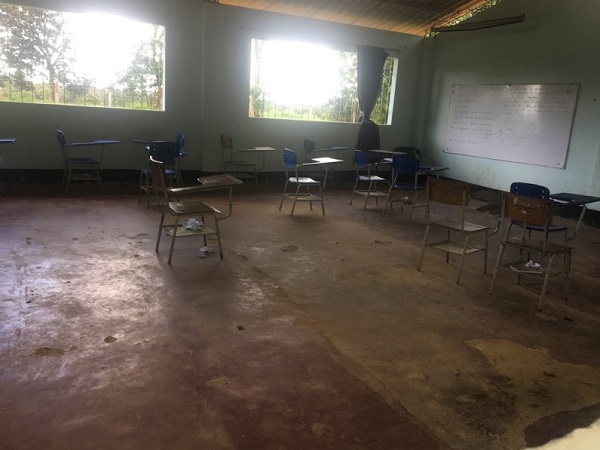 “There are various factors, including the breakdown of families, not finding anything to do and the lack of life guarantees,” the religious leader told InSight Crime, in reference to reasons why youths join the dissidents.

“For example, this boy is almost 17, was in school until fourth grade and what he was doing was harvesting coca. With nothing to harvest, he joined the dissent. Well, it’s logical that a boy of that age wants to have money, a girlfriend and to go out,” he added.

Like the rest of Miraflores, the classrooms seem to cry out for help. But few believe it will ever arrive. The school in the urban area educates 420 students, with the help of six teachers who work in an institution with minimal resources. Looking into the eyes of the wary children, one can see the precariousness of the dormitories and the absence of recreational areas, which discourage even the youngest.

Fighting has ceased, and the anxiety generated by the guerrilla attacks is no longer felt. But even so, the much promised seed of peace did not flourish here.

share on Facebookshare on Twitter
Most powerful sprints in 2017, featuring Peter Sagan and Fernando Gaviria
Terrifying moment cop confronts ex walking her dog before shooting her, killing himself