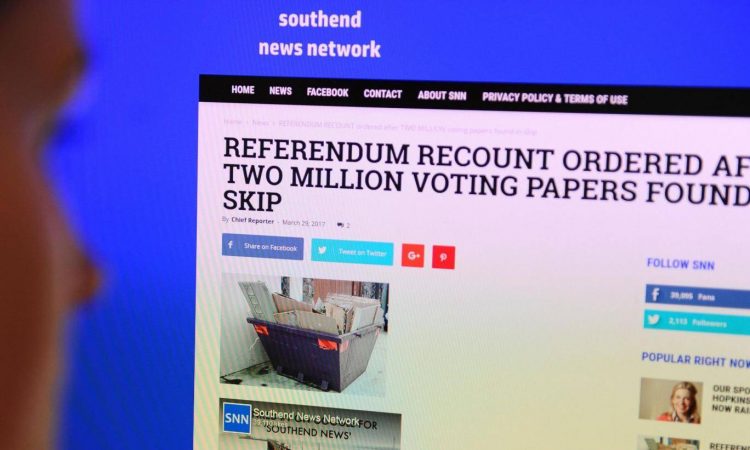 Fake news just got real. Brandon Griesemer, who is from Detroit, was arrested on Friday after making more than 20 phone calls to cable channel CNN and threatening to travel to the news organisation’s Atlanta headquarters and carry out a mass shooting.

So said the New York Post on Tuesday. They called Griesemer a “madman” and a “maniac”, and said his calls had become “increasingly deranged”. “Fake news, I’m coming to gun you all down,” Griesemer apparently told one telephone operator at CNN.

The Post attributed its information to the Atlanta news channel WGCL-TV, who reported that Griesemer had said: “I am coming to Georgia right now to go to the CNN headquarters to f***ing gun every single last one of you.”

By the time the story had started to be shared widely on Twitter, Griesemer had apparently said: “Fake News. I’m coming to gun you all down. F*** you f***ing n*****s”.

Perhaps Griesemer said all of those things – he did, after all, make more than 20 phone calls. Perhaps he said none of them. Or perhaps, as JRR Tolkien said in the foreword to Lord of the Rings, the tale grew in the telling. 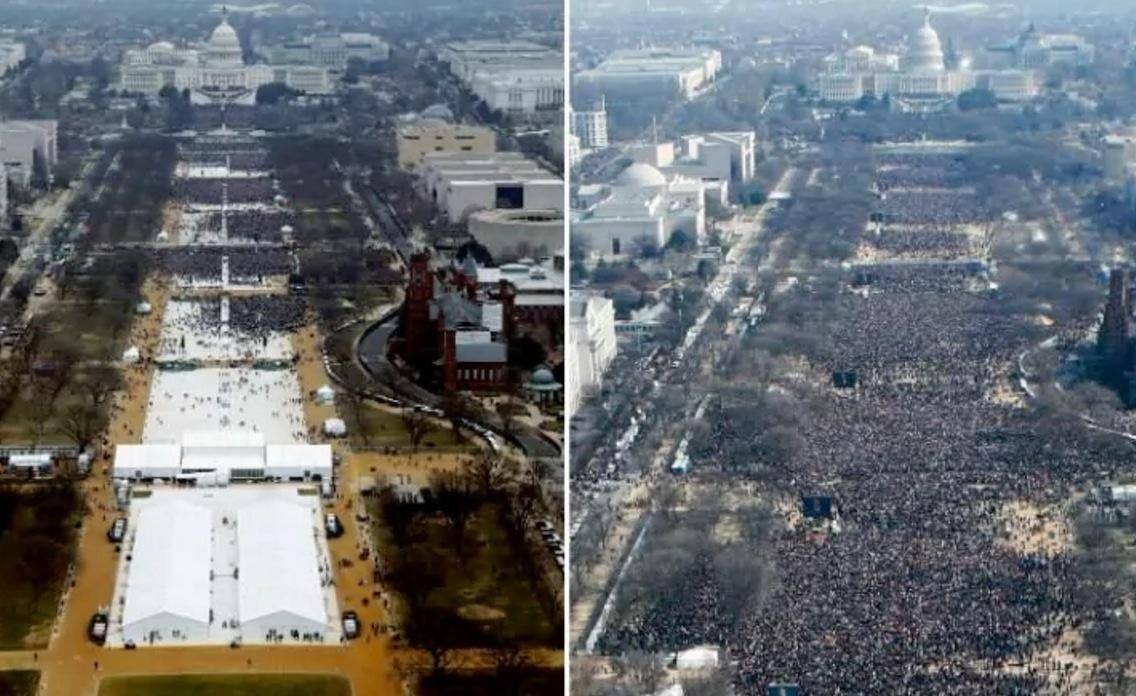 There’s some irony in the fact that a news story about fake news is itself susceptible to some of the criticisms that are levelled at news, and how we consume it, and how it is fed to us, and the question of what is and isn’t fake news.

Fake news is everywhere, or at least the discussion of it is. Indeed, Collins English Dictionary last year made “fake news” its word of the year (despite being two words – fake news in itself?). It’s certainly true that it was on everyone’s lips in 2017, especially the President of the United States. Indeed, Donald Trump claimed in November to have actually invented the phrase. “I guess other people have used it perhaps over the years but I’ve never noticed it,” he told TV interviewer Mike Huckabee.

Collins puts the rise of the phrase back to the early 2000s, but it’s much more venerable than that, as broadcaster and journalist Samira Ahmed showed in Bradford on Monday evening. Ahmed, who presents the BBC’s Newswatchprogramme, was on a panel discussion at the city’s Science and Media Museum, which has curated and hosted a pop-up exhibition on fake news. The exhibition ends this weekend. 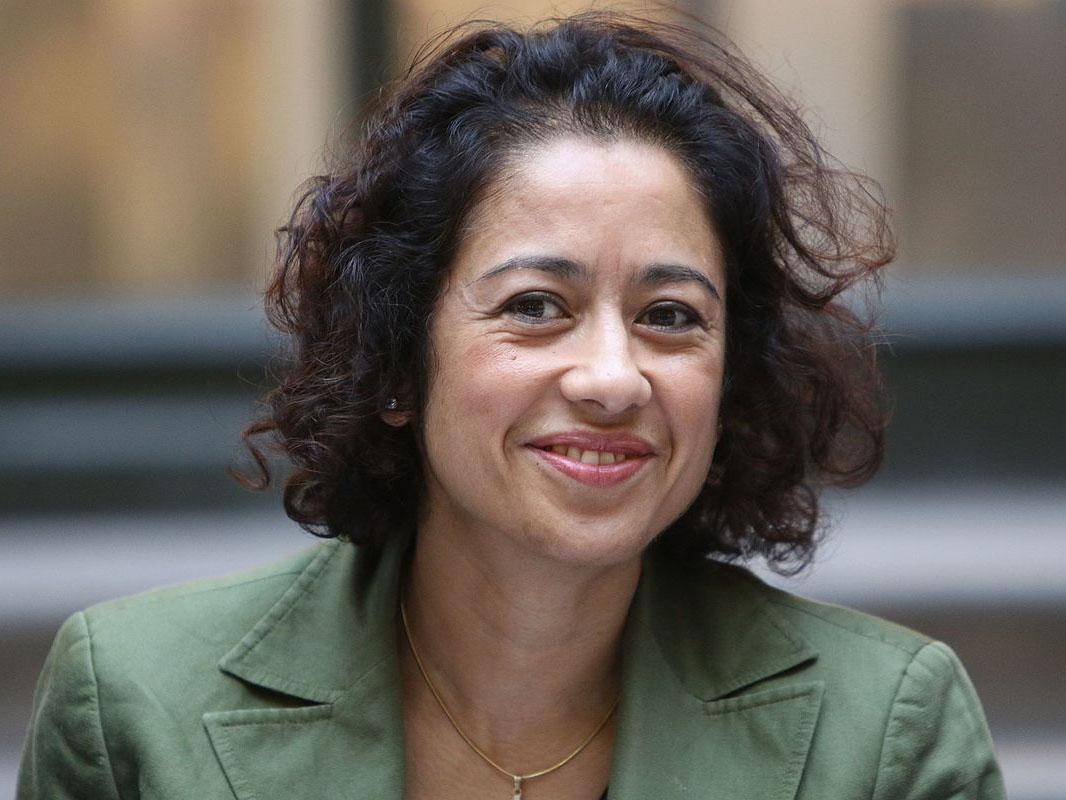 Broadcaster and journalist Samira Ahmed spoke this week on a panel discussion at Bradford’s Science and Media Museum, which is hosting a pop-up exhibition on fake news

As well as pointing to some of the exhibits in the museum – such as the Cottingley fairies photographs; initial media reports that said everyone on the Titanic had been saved; the photographic evidence that gave lie to official claims that Trump’s inauguration a year ago had been better attended than Barack Obama’s – Ahmed also provided a couple of examples of perhaps surprisingly early use of the phrase. From 1890, she pulled a headline from the Cincinnati Commercial Tribune that proclaimed, “Secretary Brunnell Declares Fake News About His People Is Being Telegraphed Over The Country”, while the following year the Buffalo Commercial newspaper published a leader comment saying the public had no “appetite for ‘fake news’ and ‘special fiend’ decoctions such as were served up by a local syndicate a year or two ago”. 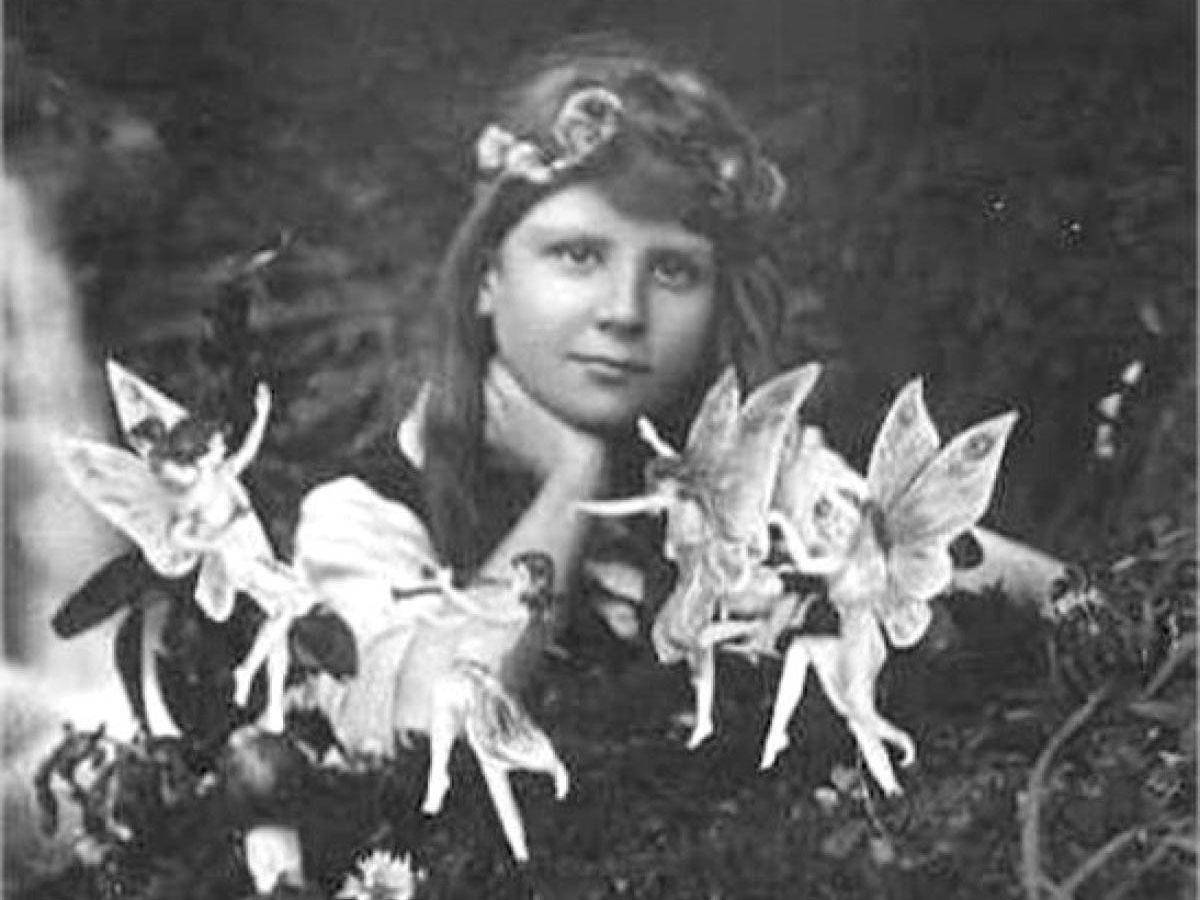 The Cottingley Fairies photographs of 1917, which some interpreted as proof of paranormal phenomena (Wikimedia Commons)

So, nothing new under the sun. But it’s undeniable that fake news has become one of the overriding concerns of the modern age. But what exactly do we mean by it? Well, as was discussed on the panel, there are various degrees of fakeness. Something might be an out and out lie – a Second World War bomber found on the moon, to reference a classic Sunday Sport front page, which we all knew wasn’t true even in those far-off, simpler days of the 1980s. There is fake news for political gain, or more for political discredit: Jeremy Corbyn’s “traingate” row, for example, in which the Labour leader posting a vide of himself not being able to get a seat in a carriage was dogged by claim and counter-claim for weeks. 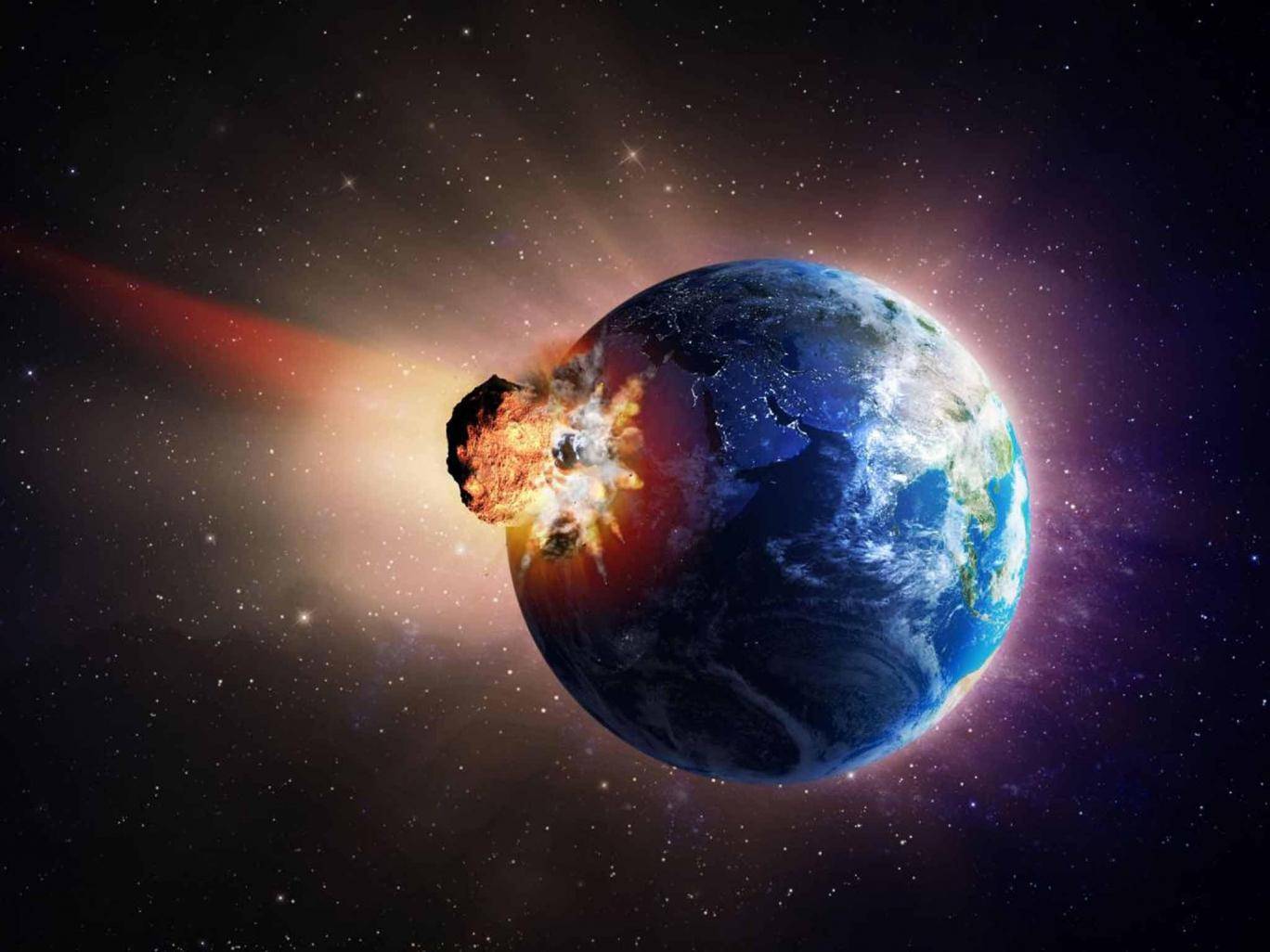 Nasa releases statement over rumours that asteroid will destroy Earth

Nasa has just debunked a recent rumour of a giant asteroid due to crash into the Earth in September. Internet conspiracy theorists have been saying that an asteroid will hit our planet sometime between September 15 and 28, destroying the American continents. Acting in its role as space-news fact-checker, Nasa has issued a statement refuting the lot of it. “That’s the rumor that has gone viral – now here are the facts,” it said in a press release entitled ‘NASA: There is No Asteroid Threatening Earth’ Alamy

Revenge is a dish best served cold, or viral on YouTube as seemed to be the case for one German ex-husband who uploaded a video of himself using power tools to saw his possessions in half so he could literally give his former wife half of everything owned. The video, titled “For Laura”, quickly went viral reaching nearly 5.8 million views with the description “Thank you for 12 ‘beautiful’ years, Laura! You’ve really earned half.”  Although the course of true love never did run smooth, it did seem that the jilted lover was taking revenge to a whole new level with the angst-ridden video. Now, however, all has been explained. The video was not created by a jealous ex, but filmed by a media-savvy legal company looking to expand its customer base Youtube

There’s distraction, as Ahmed pointed out, using an example of a photograph of Canadian Prime Minister wearing Star Wars socks going viral, and distracting us with a big ol’ internet squee from what many people consider Justin Trudeau’s less-than sparkling political record in some areas.

And there’s also the blurring of lines between entertainment and serious news, particularly politics. Where once politicians, especially world leaders, had a measure of distance from the bread and circuses that keep the rest of us going from day to day, now we have images of talk show host Jimmy Kimmel ruffling Donald Trump’s hair, James Corden planting a kiss on the cheek of former White House press secretary Sean Spicer, and Jeremy Paxman marking his last appearance on Newsnight by climbing on to a tandem bike with Boris Johnson and riding off into the sunset.

“I think this crossed the line,” mused Ahmed to the packed debate. “It said that in the end we [media, celebrities and politicians] are all on the same side, and that is not necessarily the side of the public.” 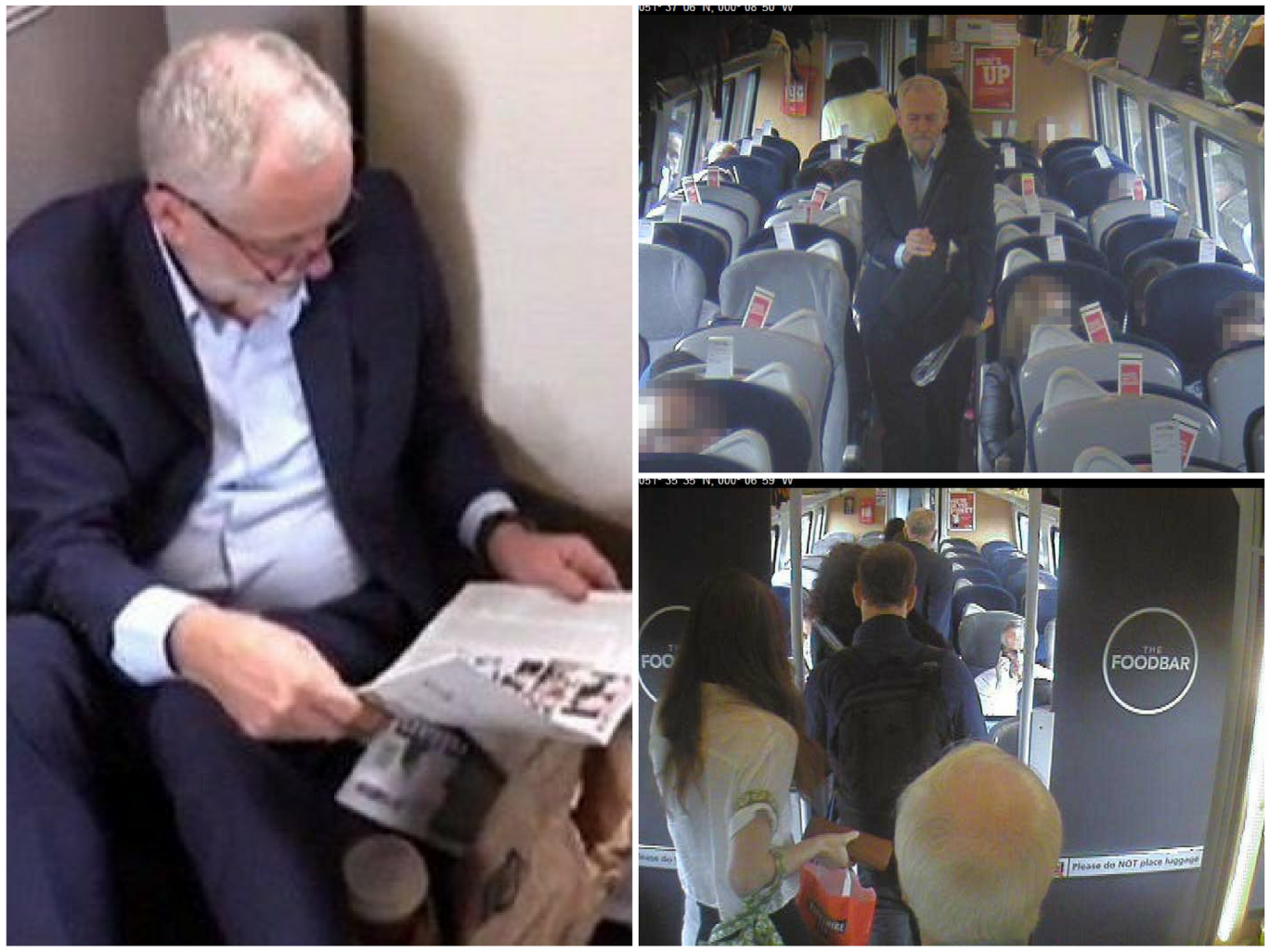 Virgin Trains released CCTV footage, appearing to contradict Jeremy Corbyn’s claim that he had to sit on the floor of a train because no seats were available

Also on the panel were John Lubbock, from Wikimedia, the charitable foundation that promotes and enables the work of the vast online encyclopaedia Wikipedia; Natalie Kane, curator of digital design at the V&A museum in London, and Dr Gabor Batonyi, representing the peace studies department at the University of Bradford.

Kane had some interesting points to make about how digital design is intersecting the concept of fake news, especially in terms of how new aspects and definitions of “viral” are affecting and involving physical objects. We’re all familiar with an image or video going viral, and this often feeds into the idea of fake news as people share content without really stopping to ask where it’s coming from. But that can be taken to another level, as one item in the V&A’s collection shows: it’s a gun, the components created using a 3D printer. It’s good for one shot, but maybe that’s all that’s required. As another example, Kane cited the “pussy hat” as worn by participants in the global Women’s Marches (and directly referencing Trump’s pre-election “pussy-grabbing” admissions). While guns and hats aren’t fake news in and of themselves, they are perhaps side effects of it, or reactions to it. The files for printing guns, and the patterns for knitting hats, are circulated around the internet, perhaps caught up in the wake of fake news, or at least in the case of the hats, the concept of viral information.

It’s the viral nature of information and how rapidly we share it which can contribute to the fakeness of news. How often do we retweet or share a Facebook post without delving deeply into where it’s come from? And this virality can, in turn, set the agenda for mainstream news organisations. Ahmed points to Prime Minister Theresa May’s coughing fit during her keynote speech at the Tory party conference in October. Ahmed said: “I’m convinced that 15 years ago the BBC would not have led their report on the fact of her coughing. But because social media was talking about it, it became the important point rather than what was being said.” 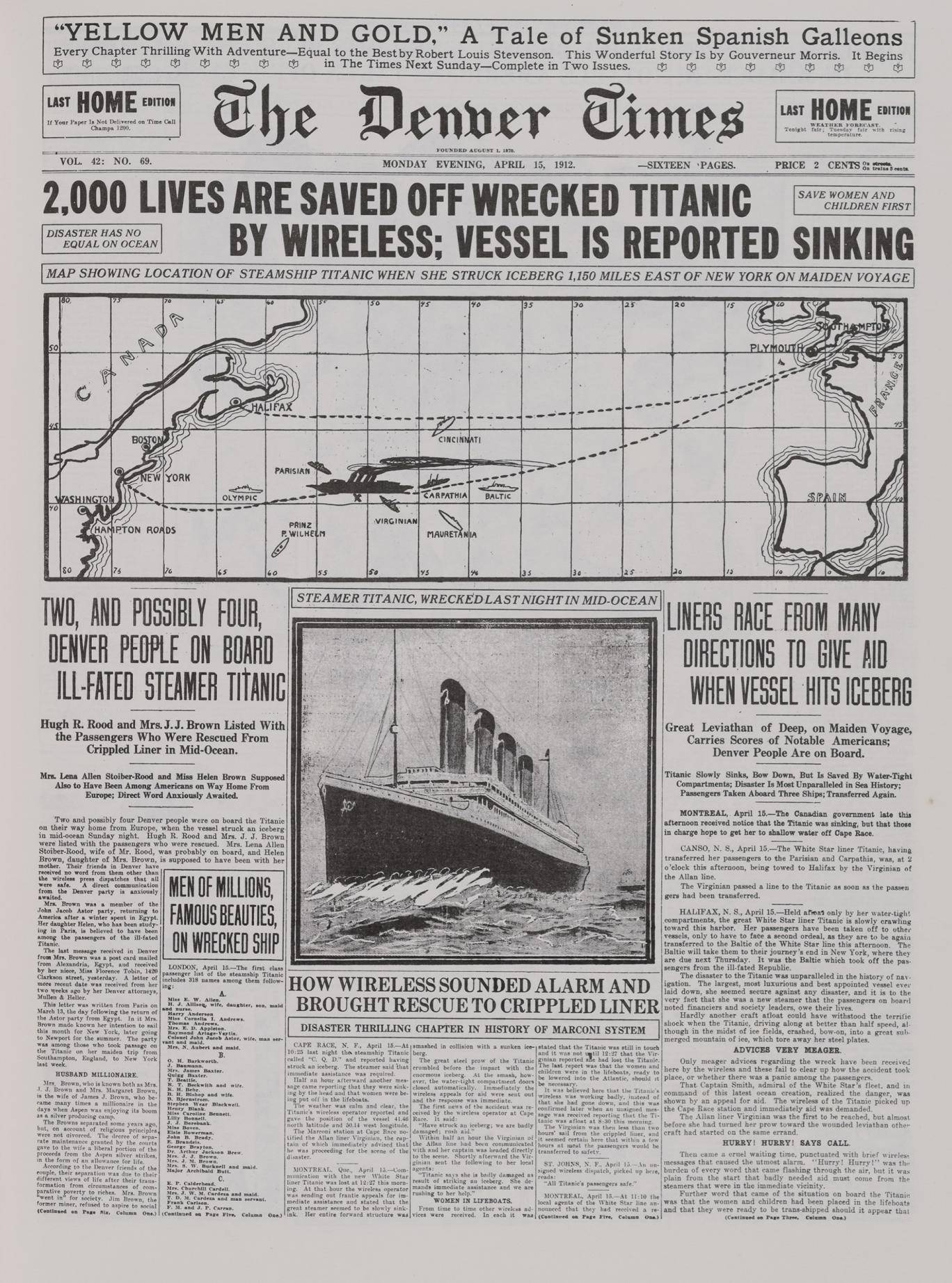 Interestingly, though, this week saw the latest “trust barometer” released by communications marketing group Edelman, which pointed to a drop in the public’s trust about what they read on social media particularly, and an increase in reliance on traditional media. And yet, we continue to share tweets without verifying them, and trot out the old mantra “don’t believe what you read in the papers”. Perhaps there’s just too much information out there, as Wikimedia’s John Lubbock suggested.

“There’s been an explosion of data, and that perhaps makes us less decisive,” he said. And isn’t Wikipedia part of that problem? It hit its 17th birthday a week ago, marking the milestone with 47 million articles, 181 million pages and 72 million users. The USP of Wikipedia is that anyone – within a certain amount of reason – can contribute to it and edit it. If we’re all editors now, isn’t it millions of people shouting to get their version of the truth across?

“People think Wikipedia is the Wild West,” said Lubbock. “But because Wikimedia is a charity, and we don’t carry advertising, and we’re not for profit, we like to think Wikipedia isn’t contributing to the ‘attention economy’.” In other words, unlike a profit-making website, Wikipedia doesn’t need to keep you on its site after you’ve found what you’re looking for, just to please advertisers.

And because Wikipedia is, theoretically, edited by us all, there’s no one, authoritative voice telling us what to believe: “Truth is something we can create collaboratively.”