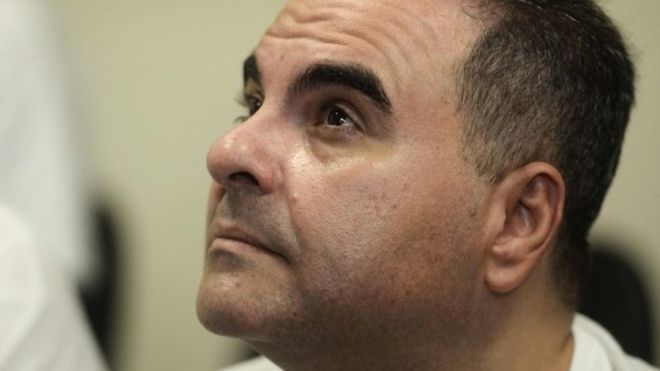 A court in El Salvador has sentenced former President Antonio Saca, 53, to 10 years in prison.

Saca, who governed the Central American country from 2004 to 2009, had pleaded guilty to charges of embezzlement and money laundering.

Prosecutors say he appropriated public funds for himself and his right-wing Arena party.

While Saca is the first Salvadorean president to be jailed for corruption, both his predecessor and his successor in office have also been accused of corruption.

Prosecutors say the three leaders, two of them right-wing and one left-wing, misappropriated state funds worth hundreds of millions of dollars.

Antonio Saca admitted in court that he had created a network of bogus companies and frontmen which embezzled a total of $300m from state funds.

His predecessor, Francisco Flores, was accused of diverting a $15m-donation given to his government by Taiwan to help victims of the earthquakes which hit El Salvador in 2001.

Mr Flores died in 2016 while under house arrest awaiting trial.

Mauricio Funes, a member of the left-wing FMLN party, has been accused of using public funds to renovate his home, to pay for hospital bills and for foreign trips while he was in office. He has denied any wrongdoing.

Mr Funes moved to Nicaragua after prosecutors began to look into $700,000 of funds in his bank account, the origin of which they said the ex-leader could not explain.