HomeLiveDuque “Has Done Nothing for Us,” Says Trump
Live

Duque “Has Done Nothing for Us,” Says Trump 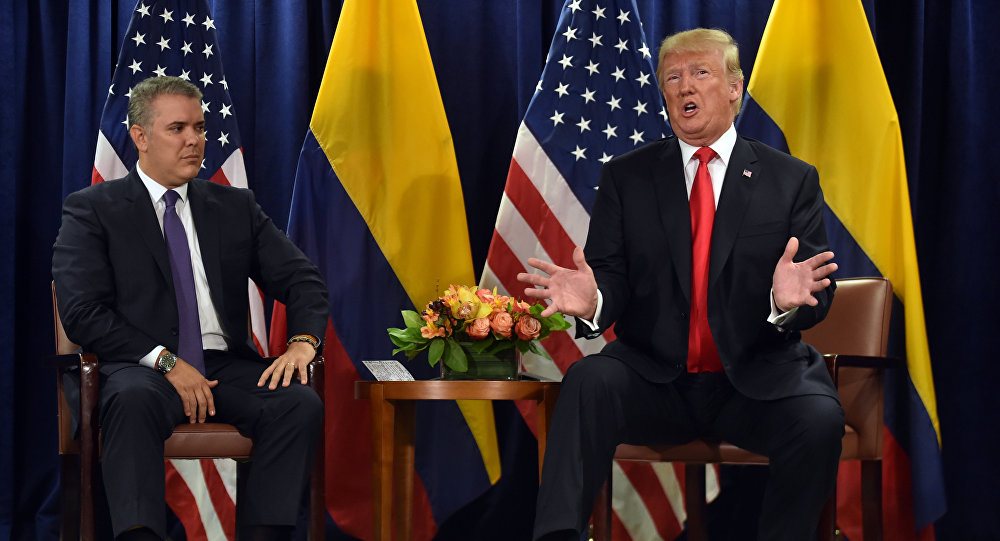 If President Iván Duque plans to make Donald Trump happy, he will do so at the detriment of Colombia. And he is condemned to fail.

On March 29, Trump launched a diplomatic broadside at Colombia and Duque.

“I’ll tell you something: Colombia, you have your new president of Colombia, really good guy. I’ve met him, we had him at the White House. He said how he was going to stop drugs. More drugs are coming out of Colombia right now than before he was president — so he has done nothing for us,” the US president told reporters in Florida.

Trump was right in the fact that more drugs are leaving Colombia than when Duque took office. Indeed, more drugs are leaving Colombia than ever before. Most of this is due to record levels of cocaine production as well as Colombia’s famous brand of marijuana, known as “creepy,” which is making its way in increasing quantities across South America and into Central America and the Caribbean.

Colombia has long sacrificed its counter-narcotics policy to US interests. And where has this led the country? To the point where it is producing more drugs than ever.

The way success in the drug war is measured needs to change and the fight must move away from the tactics that dominate Colombian thinking to date: eradication, interdiction and kingpin targeting.

For the United States, the aim is to reduce the flow of drugs reaching its shores. But Colombia’s counter-narcotics strategy should be far broader: looking at undermining the conditions that facilitate drug production, disrupting criminal networks that manage this illegal economy, arresting and convicting key members of those networks, identifying corrupt state actors that protect the industry and perhaps most importantly, tracking, tracing and seizing the money that fuels the whole process.

Until now, the main measures of “success” in the drug war have been reducing the number of hectares of coca under cultivation, cocaine seizures and the extradition of top drug traffickers. This is all well and good, but these strategies only deal with a fraction of the links in the drug chain. And the obsession with these measurables has placed Colombia on what former president Juan Manuel Santos described as an exercise bicycle, where pedaling furiously gets you nowhere.

I am not advocating for the complete legalization of the drug trade. This is not a decision Colombia can make alone and would have little impact unless it was part of an international process. But there are ways to change the way the drug war is being fought. Drug trafficking is a business and tackling it as such could provide some new thinking.

Colombia spends most of its resources dedicated to the drug war on the first links in the chain: the coca farmers and the armed groups that control cocaine production. However, this is the least lucrative part of the cocaine chain, where profits rarely exceed 150 percent. Even the retail side of the business, in destination countries, only earns around 300 percent profit.

These would be amazing margins for any legal business, but the real money in the cocaine industry goes to those who buy the cocaine in Colombia and deliver it to consumer nations, where it is sold wholesale to retailers. At this stage, earnings can reach up to 3,000 percent. And while the Mexican cartels might dominate this as far as the US market is concerned, the Colombians dominate supply to Europe, Asia and Australia.

International drug smugglers are the motors of the cocaine business. They do not only earn the big money but use it to fund corruption and violence that undermines governance in Colombia and around the world. Yet what percentage of Colombia’s resources in the drug war are concentrated on this link of the chain?  I would venture to say less than 15 percent. Yet the coca farmers who eke out a living from the hardy coca bush are feeling the full weight of the Colombian state.

Duque should shift the way the drug war is being fought and avoid the allure of the numbers game where success is measured in hectares eradicated, tons seized and capos killed. He should not think about how best to please Trump. The US president routinely lets down his allies and appears to have little strategy behind his pronouncements or indeed behind his entire foreign policy.

If Duque wants to get serious about containing Colombia’s drug situation, he must focus on Colombian priorities, not US ones.