HomeLiveChile Church scandal: ‘How I escaped the priest who abused me for decades’
Live

Chile Church scandal: ‘How I escaped the priest who abused me for decades’ 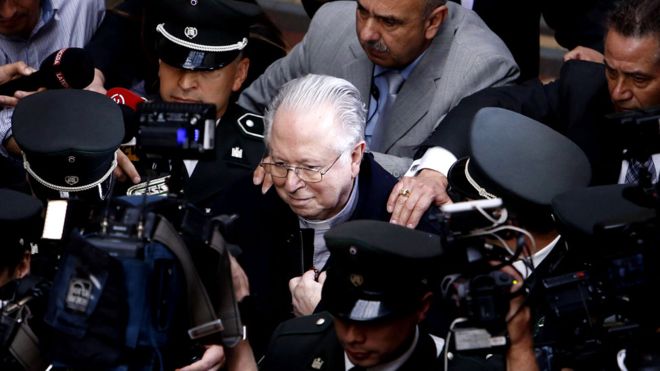 In Chile, more than 100 Catholic clergy are being investigated over alleged sex crimes and attempts to cover them up. It’s a scandal that haunts the reign of Pope Francis and has tipped the Chilean church into crisis. But it began decades ago with one man – Father Fernando Karadima, a parish priest in Santiago, who became Chile’s most notorious sexual predator.

“He offered you the vision of being called by the Lord. He showed you a very wonderful world,” remembers Dr James Hamilton, a gastric surgeon now in his 50s.

“He always told us he had a special gift – a kind of miracle gift – that he could see in every young person, if they had been called by God. He was almost a kind of saint.”

Father Fernando Karadima offered the adolescent James Hamilton refuge in the early 1980s. Chile had been under the dictatorship of Gen Augusto Pinochet for a decade. And in those troubled years of killings and disappearances, the church community created by this charismatic priest in the upmarket Santiago parish of El Bosque provided welcome reassurance.

“For a young person, it was like the bee and the honey – it was sweet in a world of difficulties, when you were struggling with your family,” says James Hamilton.

His father had left the family home, so here was a teenager who was vulnerable – easy prey for a practised abuser.

And, as a young idealist, he believed he had only two choices: “Join the people fighting against Pinochet, mostly through violence. Or, follow the road the Catholic Church showed you – the ways of the saints, of peace and to become the voice of Jesus. I wanted to study medicine, so my way was non-violence.”

But although the Catholic Church would be instrumental in supporting victims of the dictatorship, some priests believed Pinochet was Chile’s saviour – Karadima was one of them. James Hamilton was invited to join Catholic Action, an exclusive youth group that met in El Bosque to listen to Karadima talk about heroism, the saints and the need to be humble and obedient. This impressionable teenager felt special, as though he had been chosen.

Then the sexual abuse began.

And Karadima, wielding a toxic pseudo-spirituality, did not disabuse James Hamilton of these powerful feelings of guilt.

“Something that is very terrible, is that every time he abused me he sent me to another priest to confess,” remembers Hamilton.

“So he drove all the guilt to me. And this other priest who knew everything, he always stayed silent when I confessed about Karadima. He just told me, ‘Be patient, don’t worry.'”

At the church in El Bosque, Karadima was well protected by those around him. He bewitched his acolytes, and trained dozens of young men for the priesthood – four of his proteges would become bishops.

Karadima’s hold over James Hamilton – and the abuse – continued for two decades. It didn’t stop even after the doctor married and had children.

Now that he has spent 14 years in psychotherapy, three times a week, he understands the dynamics of this abusive relationship very well.

But as a young man he felt compelled to comply with his abuser. When he went for dinner at El Bosque with his wife, Karadima would ask him to leave the table and accompany him upstairs on the pretext of a medical complaint that needed attention.

“Many times I tried to distance myself from Karadima, but every time I tried he made a kind of trial with two or three bishops and three or four priests. They put me in a room, and told me the devil was inside me.”

This was what was known as “fraternal correction” at El Bosque – a powerful mechanism citing possession by the devil, and used to bring disobedient members of Karadima’s flock back into the fold.

“I felt my kids were in danger. Especially my boy,” he says.

Karadima pursued the doctor, sending priests and bishops to speak to his family and employer. James Hamilton reported Karadima to church authorities, and although he did not know it at the time, he was the second man in two years to make a complaint of sexual abuse against the El Bosque priest. But there was a deafening silence from the Catholic Church. There would be no formal investigation for years, until the evidence against Karadima became overwhelming.

By 2009, James Hamilton’s marriage had broken down and he sought an annulment. In the application he cited sexual abuse by Karadima, and the hold the priest had over him at the time of his marriage, as the reason.

The Church put pressure on him – he was visited by clergy requesting him to stop pursuing the annulment.

“They asked me to sign a declaration – it said that I was not a minor when I met Karadima, and that this was a relationship between two men.”

He refused. “I couldn’t sign it because it wasn’t true,” he says. He got the annulment.

It was when details of the annulment were leaked that the Catholic Church had to investigate Fernando Karadima.

By then, James Hamilton had made contact with other survivors of Karadima’s abuse. In 2010, the men made declarations to a civil prosecutor. They knew the priest would not go to jail because of Chile’s Statute of Limitations, but they did not want to be part of a cover-up. It was scary.

“Our names were in the press – we were [seen as] the worst. I thought that someone would try and murder me – put a bomb under my car or, my brakes would be cut in a descent from the mountains. This kind of thing happened in Chile under Pinochet’s dictatorship. And Karadima was a Pinochet guy – he was friends with all Pinochet’s former generals. He had big power – until today.”

Today Fernando Karadima is 88. He lives in a convent set in extensive gardens located in an up-market district of Santiago. In 2011 the Vatican found him guilty of sexually abusing minors, sometimes by force. He was sentenced to a life of penance and prayer, and forbidden from having contact with former parishioners, or from performing any public act of ministry.

So why did it take so long? What stopped the then-Archbishop of Santiago, Cardinal Francisco Javier Errazuriz, from initiating an ecclesiastical investigation into Karadima’s behaviour after he received the first report of abuse at least seven years previously?

“Unfortunately, I judged that the accusations weren’t credible at the time,” he told the media in 2010.

The Karadima case shocked Chile. Resentment against the Catholic Church simmered until 2015. Then, when Pope Francis appointed one of the disgraced priest’s acolytes, Juan Barros, as bishop – a man who had allegedly protected Karadima – Chileans were furious. Protesters greeted the Pope when he visited Chile in January 2018, and the pontiff’s dismissal of allegations against Bishop Barros as “slander” provoked enormous indignation. After he left Santiago, Pope Francis was forced to respond to his critics, and sent two envoys to Chile to investigate sex crime.

The staggering story that has emerged since has provoked a deep crisis in the Catholic Church. The Vatican’s envoys produced a 2,300-page report, and the Pope acknowledged a, “culture of abuse” in Chile. Five bishops have resigned – including Juan Barros. Meanwhile, in a first for Chile, civil prosecutors have seized church documents in a series of high-profile raids.

The civil authorities in Chile are investigating 119 cases of sexual abuse and their concealment by the church. Of the 178 victims so far identified, nearly half were minors at the time of the alleged offences. The Archbishop of Santiago, Cardinal Ricardo Ezzati, has been called by prosecutors to testify.

Although the investigation has moved beyond Fernando Karadima and his faithful coterie, the commitment of Chile’s lay authorities to securing justice for victims of clerical sexual abuse has emboldened more of Karadima’s victims to come forward. Last month, Father Francisco Javier Ossa Figueroa spent two hours giving his testimony to prosecutors about what happened to him in El Bosque from the late 1980s onwards.

“It was tough to dig it all up, but I know it could help a lot of people. You do need to be brave, because it wasn’t just me as a priest who went to testify – it was me, Francisco, the person who was personally hurt by this. But I feel as though a weight has been lifted from me, and that I’m not alone.”

In the wake of this year’s explosive revelations about the Catholic Church in Chile, Father Francisco was called to meet the Pope in Rome to discuss his experience of abuse.

James Hamilton too was invited to the Vatican, together with the two men who had also contributed to bringing down Fernando Karadima in 2011 – Jose Andres Murillo and Juan Carlos Cruz. Pope Francis has admitted he made, “grave errors” in his judgement of events in Chile, but James Hamilton is not impressed.

“The Pope told us nothing. He didn’t tell us anything about what he would do, he just asked us to pray for him.”

Dr Hamilton’s years of therapy have helped him recover from his ordeal, but this experienced surgeon says he sacrificed a great deal by going public with his allegations.

As a result, he is no longer a university professor, or chief of surgery.

What he wants is for the Catholic Church to name and shame – for the powerful men still in Chile’s Catholic hierarchy to take responsibility for what they did.

“They almost murdered my heart, my soul… When you kill the soul – and I can tell you this as a physician – you begin to kill the body. Children who were abused will live 20 years less, so what are we talking about? They are criminals.”