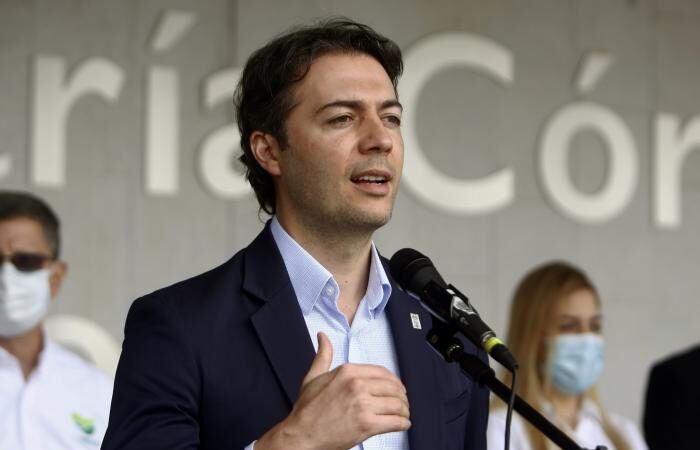 “This is just beginning. If they think they are going to stop us, they are wrong,” Mayor Quintero  stressed amid applause and shouts of support.

Colombians gathered in La Alpujarra Square with flags and harangues in support of Quitero, who went out to the terrace of the Mayor’s Office to tell citizens that he will fight to stay in office and urged people to defend their political rights through peaceful resistance.

“A democratic Medellin is not going to allow a coup d’état orchestrated by the Attorney General Cabello and President Ivan Duque,” Quintero told citizens who remained under a heavy downpour.

“Since they did not want us in the Mayor’s Office, they will have us in the streets. We’ll defend the future that Colombia deserves block by block. We are going to fight for the democracy they want to take away from us. And I tell them once and for all: we are going to win, I swear it,” he stressed.

Previously, Attorney General Cabello temporarily suspended the mayors of Medellin and Ibague, as well as two councilors from other municipalities, to investigate them for their alleged involvement in politics.

“History sometimes seems to repeat itself… In a square similar to this one, under the capital city’s rain and cold, thousands of young people went out to defend democracy when a fascist prosecutor wanted to irregularly remove Gustavo Petro. Still I remember the cold in my hands and my heart on fire,” said the Mayor of Medellin.

Quintero also rejected the appointment of the High Commissioner for Peace, Juan Restrepo, as mayor in charge and denounced that his appointment aims to “break” the city’s institutions.

“This is just beginning. If they think they are going to stop us, they are wrong,” Quintero said, referring to the Colombian right, amid applause and shouts of support.

https://www.telesurenglish.net/
share on Facebookshare on Twitter
NASA Welcomes Vice President of Colombia for Artemis Accords Signing
Everything you need to know before visiting Colombia, a country you might never want to leave