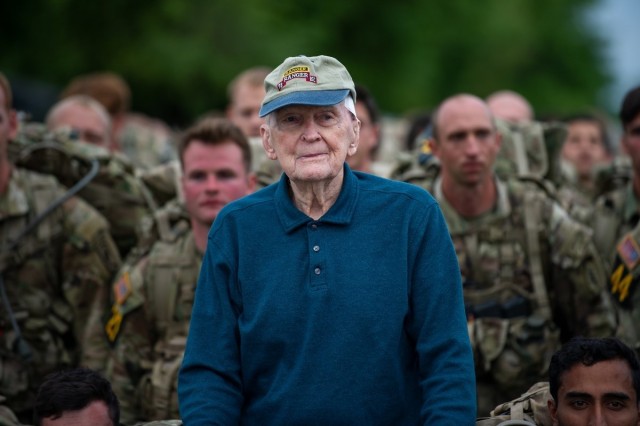 WASHINGTON — A retired officer who led fellow Rangers and Korean Augmentation to the United States Army soldiers across frozen terrain under enemy fire to seize and defend Hill 205 in the vicinity of Unsan, Korea, will receive the Medal of Honor.

The White House announced Wednesday that retired Col. Ralph Puckett Jr. went above and beyond the call of duty as the Eight Army Ranger Company’s commanding officer during a multiday operation that started on Nov. 25, 1950.

Accompanied by his family, Puckett is slated to receive the highest military honor for valor in action during a White House ceremony on Friday.

As a recent graduate of the U.S. Military Academy, then-1st Lt. Puckett had limited infantry training and no combat experience when he was tasked to stand up and lead a provisional Ranger company at Camp Drake, Japan, in August 1950.

Hundreds of Soldiers volunteered for the unit, which allowed Puckett to select his Soldiers based on their weapons qualification scores, duty performance, athletic ability and personal desire to serve as an Army Ranger.

The Eighth Army Ranger Company relocated to then-Pusan, Korea, where they began what was expected to be seven weeks of specialized training at the Eighth Army Ranger Training Center. Soldiers who could not meet the standard were cut from the company and replaced with allied Korean soldiers, known as KATUSAs.

The needs of the Army reduced the company’s training to five and a half weeks in early Oct. 1950, the Eight Army Ranger Company was activated and redesignated as the 8213th Army Unit. They were then attached to the 25th Infantry Division to help lead the unit’s advance to the north.

Days before Nov. 25, 1950, the 25th ID with the Eight Army Ranger Company, under operational control of Task Force Dolvin, were pursuing North Korean forces as they retreated northward toward the Yalu River and the border of China.

On Nov. 24, Puckett and his company seized and occupied Hill 222, suffering several casualties. The following morning, after enduring a night of near zero degree temperatures and no sleep, Puckett received orders to secure Hill 205 and defend the critical position overlooking the Chongchon River.

Puckett led 57 Rangers and Korean soldiers toward the hill riding on the tops of Sherman tanks from the 89th Tank Battalion. A half-mile from Hill 205, the force encountered enemy mortar, machine-gun and small-arms fire. The Rangers dismounted the tanks and prepared to attack.

Puckett took his company across 800 yards of frozen rice paddies under heavy enemy small-arms and mortar fire. At one point, Puckett crisscrossed the open expanse three times so his Rangers could locate and eliminate a concealed enemy machine-gun position.

After they reached the base of the hill, Puckett ordered his Rangers to fix bayonets and led them up the slope to secure the top. Six Rangers were wounded during their assault.

Once Hill 205 was secured, Puckett had his Rangers prepare their defenses against an enemy counterattack they knew would be coming. Losing his radio during the assault, Puckett and a handful of Soldiers returned to battalion headquarters to procure another radio, supplies and to coordinate supporting artillery indirect fires.

Shortly after Puckett arrived back at Hill 205 around 10 p.m., the Rangers came under heavy mortar and machine-gun fire as Chinese forces entered the Korean conflict against U.S. and U.N. forces. It would be the first of six battalion-sized attacks against Puckett’s unit.

Puckett directed a strong defense against the aggressing force, all while calling in “danger close” artillery fire to keep them at bay. Though he sustained a wound to his right thigh from a grenade, Puckett refused to be evacuated.

Severely outnumbered nearly 10 to one, Puckett continued to direct his company and waves of artillery support through additional counterattacks. He would leave his foxhole during each counterattack to observe the enemy’s movement, motivate his Rangers and call in artillery where needed the most.

As ammunition started to run low, the number of casualties on both sides continued to grow. After being wounded a second time, Puckett pushed through the pain to lead his force while the Chinese drew even closer to their location. He eventually ordered his unit to fix bayonets as they fought through another wave of the assault.

During the final counterattack in the early hours of Nov. 26, the battalion-sized Chinese force overran Hill 205. Heavy mortar fire inflicted heavy casualties upon the Eight Army Ranger Company as Puckett commanded his Rangers to withdrawal to safety.

Severely wounded, Puckett ordered his Rangers to leave him behind to ensure their safety. Disobeying their commander’s orders, two Rangers fought back against the Chinese force as they crested the hill and dragged Puckett down to safety.

Of the Rangers on the mission, 10 were either killed or missing with another 31 wounded. Puckett was initially awarded a Distinguished Service Cross for his heroic actions and devotion to duty that day.

He received a second Distinguished Service Cross for his actions in the Vietnam War and later retired from the Army in 1971.

The post Army Ranger who led 60 men in hellish battle against hundreds to receive the Medal of Honor 70 years later appeared first on Breaking911.