Who Is Keaton Jones? Bullied Tennessee Boy Gets Celebrities’ Support 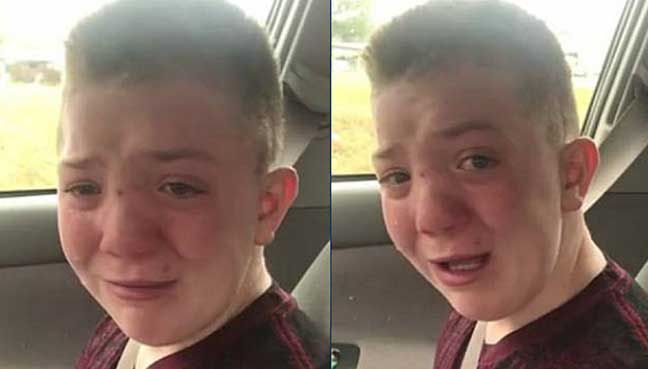 A Tennessee woman’s video of her son’s heartbreaking account of being bullied at middle school went al, leading to many on social media raising their voice against bullying and rising in support of the boy.

In a video posted on Facebook, 11-year-old Tennessee student, Keaton Jones, tearfully explained how he was bullied at school.

“They make fun of my nose. They call me ugly. They say I have no friends,” Keaton said. He then said bullies “put milk on me and put ham down my clothes, throw bread on me,” during lunch.

“Just out of curiosity, why do they bully? What’s the point of it?” he asked. “Why do you find joy in taking innocent people and finding a way to be mean to them? It’s not okay.”

Kimberly Jones posted the video of her son Keaton on her Facebook page Friday stating that she had just picked up Keaton from school because he was too afraid to go to lunch.

The video of Keaton had more than 21 million views as of late Sunday night. A GoFundMe page was also set up to raise money for his education in the future and raised more than $ 42,000 at the time of publishing this article.

According to The Knoxville News Sentinel, contrary to several reports, Keaton was a student at Maynard Middle School in Maynardville, Union County, not a school in Knox County. He had previously attended in Knox County but moved in the summer of 2017.

In a separate Facebook post in October, Kimberly wrote that her son had been born with a tumor and had a scar due to an operation that “goes all the way across his face,” Heavy.com reported.

Kimberly also wrote in the caption accompanying the clip, “For the record, Keaton asked to do this AFTER he had he me pick him up AGAIN because he was afraid to go to lunch. My kids are by no stretch perfect, & at home, he’s as all boy as they come, but by all accounts, he’s good at school. Talk to your kids. I’ve even had friends of mine tell me they’re kids were only nice to him to get him to mess with people. We all know how it feels to want to belong, but only a select few know how it really feels not to belong anywhere.”

“Captain America” star Chris Evans was among the actors to step up for Keaton and even invited him to Los Angeles for the premiere of the next “Avengers” movie.

Another “Avengers” actor, Mark Ruffalo who plays “The Hulk”, also tweeted his support and said Keaton was one of the coolest kids he has seen.

Meet Keaton Jones a very smart little boy who is being bullied at school. This video is heartbreaking!! I want to bring Keaton to Vegas and hang out at UFC Headquarters. If anyone knows how i can reach the family please let me know. Thank u everyone pic.twitter.com/BR8c4ldDFc

share on Facebookshare on Twitter
E-Commerce: Raising Pay And Creating Jobs Around The Country
Best annual report for Pear, stock went up rapidly