HomeNewsWhat can other movements learn from Colombia’s elections?
News

What can other movements learn from Colombia’s elections? 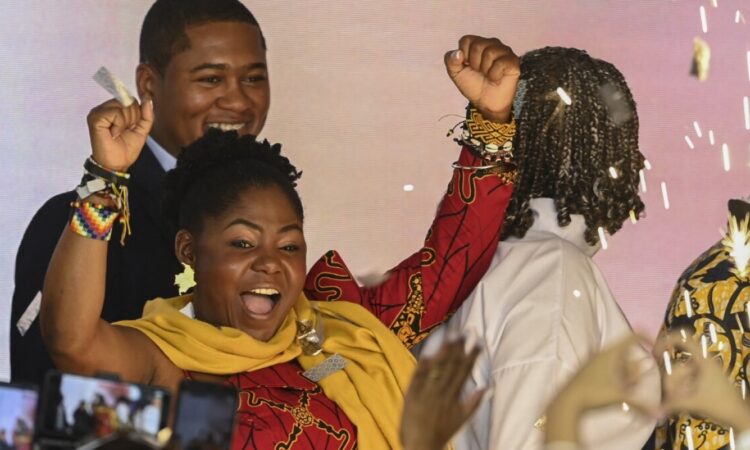 We believed it and couldn’t believe it. The beat of tambores alegres and melodies of gaitas resounding in all the Colombian town squares. Entire communities hugging on unpaved roads. So much suffering muted by the cries and celebrations that flooded neighbourhoods. For a moment on 19 June, Colombia encompassed worlds: worlds imagined, worlds hoped, and worlds to come.

After 214 long years, Colombians democratically elected a left-wing government headed by Gustavo Petro, an economist, former mayor of the capital Bogotá, and ex-guerrilla member of M19 (demobilised in 1984). His running mate Francia Márquez, an environmental lawyer and winner of the 2018 Goldman Prize for her climate justice work, will be the country’s first ever Afro-Colombian vice-president. Together, they forged the Pacto Histórico, a coalition whose strength derives from a diversity of movements and organisations.

For the first time, marginalised communities that Márquez refers to as lxs Nadies (“The Nobodies”) were protagonists in the election of a new government. Women, Indigenous populations, Afro-Colombians, the LGBTQI+ community, the working class, disabled people, communities historically impacted by state violence and environmental destruction all went out to vote. In departments with majority Afro-Colombian populations such as Chocó and Cauca, over 80% of inhabitants cast ballots, many for the first time.

The challenges the new government faces are enormous. Despite the 2016 peace agreement between the government and FARC guerrilla group, Colombia is the most dangerous place for human rights and environmental defenders worldwide. According to the Observatory of Human Rights and Conflict, there have been 231 massacres that have left over 877 dead since 2020. The new administration also faces the need to implement comprehensive land reform, transforming the economic system so it centres life over profit and addressing immense environmental challenges. It is the time for grassroots movements to stay strong and continue calling on the state for due rights and protection.

Yet with the election of Petro and Márquez, it feels like scarred territories are already taking a renewed breath of life. Colombia has taken a huge step towards a more plural and inclusive democracy and revived the possibility of changing long entrenched dynamics.

This election is a historic victory for all of us worldwide: it shows us a transformed political space and a genuine possibility for sustained change. Although political movements and contexts in Africa vary enormously both with Latin America and among themselves, there may be important lessons to be learnt from Colombia’s experience. There were key narratives and material wins in this election that could be an inspiration for movements and political parties similarly hoping to drive fundamental shifts toward justice-centred politics around the world. Here are some offerings.

The Pacto Histórico ran on a politics of love that helped Petro and Márquez engage marginalised communities across Colombia. Their principles of vivir sabroso (“living enjoyably”) and hasta que la dignidad se haga costumbre (“until dignity becomes practice”) emphasised enjoying life, living with dignity, and making joyful resistance a practice for ourselves and our communities. Their powerful narratives gave people hope and allowed them to dream of new realities.

These narratives emerge from various local social movements and connect to a global feminist anthem of collective joy. They bridge the Andean framework of buen vivir (“good living”) that has accompanied movements across Latin America for decades with Afro-Colombian approaches to life and social struggles.

Vivir sabroso, part of the Pacific region’s linguistic heritage, reflects a model of spiritual, economic, and cultural organisation in harmony with one’s environments and communities. Its force is felt in the daily struggle against exile and abandonment, which also happens through ruptures to cultural traditions and assaults on the senti-pensar (thinking-feeling) of being in active kinship with the living world of the jungles, land and waters.

Márquez also rescued the phrase “Hasta que la dignidad se haga costumbre”, used in Chile and across Latin America during social unrest in recent years and first used used by three women from the hñáhñú or otomí community in central Mexico when the government apologised for wrongly accusing them of kidnapping.

Now, people across Colombia are taking these invitations to live enjoyably and practice dignity as theirs. On election day, people on the streets used these phrases as they talked about a new way of doing politics and conceiving well-being. By shaping their campaign around these narratives, Petro and Márquez opened up new imaginary spaces, allowing people to see outside their realities and dream collectively of better horizons.

From resistance to power

For years, if not centuries, Latin America’s extractivist models of “development”, imported since the colony, have treated their “Nobodies” as the antithesis of progress. This has left many countries with a noxious idea that marginalised populations may very well hope and work towards improving their quality of life, but they may never dream of power. Especially political power.

As with the election of Epsy Campbell as Costa Rica’s first Afro-Costa Rican vice-president in 2018, Márquez has disturbed this seemingly immovable political architecture. She will enter a Latin American government that has long been structurally violent against Black people and publicly silent on racism. In Colombia, Afro-descendant peoples continue to be one of the main victims of structural racism, forced displacement and homicides due to armed conflict, narco-trafficking and seizure of communal lands.

In her speeches, Márquez has addressed this as well as the environmental racism experienced by Black and Indigenous communities head on, denouncing the militarisation of territories and the criminalisation of land defenders. She has also adopted the saying Soy porque somos (“I am because we are”), a philosophy inspired by the Zulu and Xhosa Ubuntu, in a leap for anti-racist solidarity and the honouring of ancestrality and pan-Africanism. “I am because we are, and as a people we do not give up, dammit!” she famously said in her concluding campaign speech, replacing a long-standing politics of nostalgia with the possibility of a worthy and joyful present and future.

Márquez, whose life has been threatened for her activism, has become a reference not only for Afro-descendant women and girls in Colombia, but for all Black people in Latin America, making it possible to imagine a more inclusive and powerful way of doing politics. Beyond the region, she could be seen as an example of how a member of a community long assumed to only be capable of being an object of political power made it possible to step into it by owning her identity and speaking bravely against state violence and marginalisation.

A win for ecology

Petro and Márquez put environmental justice at the very core of their political campaign. They made taking care of our “larger territory” central to their vision of the country’s transformation and have been adamant about making Colombia a leader in tackling climate change. In particular, commitments to protecting the Amazon rainforest and crafting a national and regional just transition towards a regenerative economy were the bedrock of the campaign. In his victory speech, Petro explicitly called upon other left-wing leaders to break with the thinking of the first “pink tide” socialist movements in Latin America by forgoing fossil fuels. The current high prices of coal, oil, and gas cannot be the basis for future economic and social justice, he said.

This is one of the most important pledges from their manifesto. Petro and Márquez aim to urgently reduce, with the vision to end, Colombia’s dependence on fossil fuels. They have also tabled proposals such as an immediate ban on exploration and exploitation of unconventional oil fields, fracking pilot projects, the development of offshore wells, and new licences for fossil fuel exploration. Instead of fossil fuel production and consumption, which has brought so much destruction, displacement and violence to Colombia, they are committed to transitioning into an “economy for life”, starting with the implementation of the peace accords signed in 2016 and consistently disregarded by outgoing president Iván Duque.

The just transition that Colombia has initiated could represent a beacon of hope for environmental movements around the world given the general trend towards greater fossil fuel extraction even in the midst of a rapidly deepening climate crisis. Making popular ecology a political base is a potentially game-changing strategy for global climate politics, one which emphasises the guidance and stewardship of Afro-descendant, Indigenous and rural campesino communities.

The possibility of collective sowing and learning is taking root. Despite the uncertainties, there is renewed hope that the limits of the impossible can continue to be stretched. As movements around the world struggle to shift narratives and power structures, and acknowledging the diversity of local dynamics that shape our possibilities, we humbly offer these reflections for other territories crossed by histories of colonialism, exploitation and violence.

First, on the emancipation of our speech, the Pacto Histórico’s breaking through of political walls limiting our capacity to communicate new ideas attests to the power of infusing imagination and dreaming into our vocabularies – as well as to the need for a more creatively humane politics of love that speaks freely of what moves us to “live enjoyably”.

Second, on the importance of building power and coalitions against the politics of fear, Petro and Márquez organised to reach diverse constituencies otherwise uninterested in party politics and uplifted their identities and contributions in a communal project of living with dignity, together.

Third, in a local context riddled by extractivism and destruction, and a global panorama in which environmental degradation is devastating people’s presents and futures, the incoming president and vice-president recognised that a precondition for dignity is to put Life at the centre. Colombia’s new plan for a “government of life” responds to the need to refresh economic and development models to fiercely protect the sanctity of the living world.

These rivers and mountains rise on the other side of a comma carved by the force of history, whose continuation will be written by more hands than ever – thanks to those who always imagined it. Like writer Carolina Sanin expressed in a prophetic text before the last elections in 2018: “Let’s start planning how we are going to learn. And what to teach.”