HomeNewsWATCH: Sirens Sound In Jerusalem As CNN Reporter Was In Middle Of Live Report
News

WATCH: Sirens Sound In Jerusalem As CNN Reporter Was In Middle Of Live Report 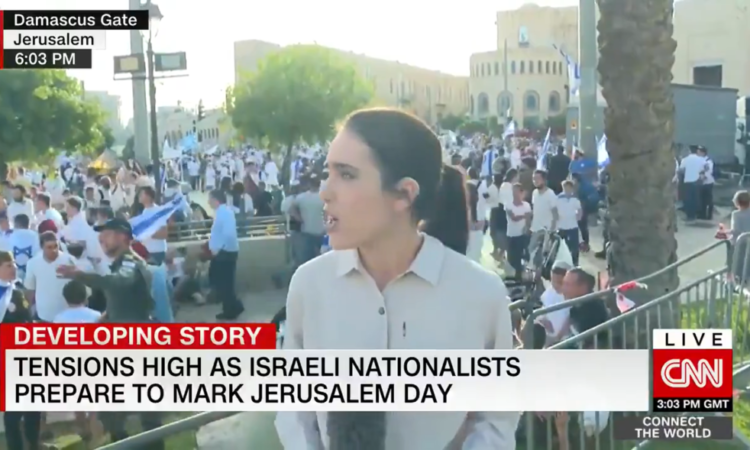 ISRAEL – The IDF confirms that seven rockets were fired at Jerusalem on Monday evening.

The attacks came Monday, shortly after Hamas had set a deadline for Israel to remove its security forces from the Har Habayis.

The sounds of outgoing rocket fire were heard in Gaza shortly before the sirens went off.

One of the rockets fired at Israel from the Gaza Strip appears to have landed in an open field near the moshav of Beit Nekofa outside Jerusalem.

Meanwhile, an anti-tank missile fired from Gaza hit an Israeli car across the border.

According to The Jerusalem Post, following the rocket fire, the Israel Air Force “carried out several strikes in Gaza, killing at least three Hamas militants and three children.”

Video shows air-raid sirens go off during a Hamas rocket attack while CNN was reporting live.

” Hamas will feel that our response to this event […] will not last several minutes, but days,” IDF Spokesperson Brig.-Gen. Hidai Zilberman said. “If Hamas doesn’t understand it yet, they will understand after what we do. We have a number of options on the table.”

We hold the Palestinian terror group Hamas in Gaza accountable for this serious aggression against us.

Minutes ago:
An anti-tank missile was just fired from Gaza toward Israel.

The post WATCH: Sirens Sound In Jerusalem As CNN Reporter Was In Middle Of Live Report appeared first on Breaking911.