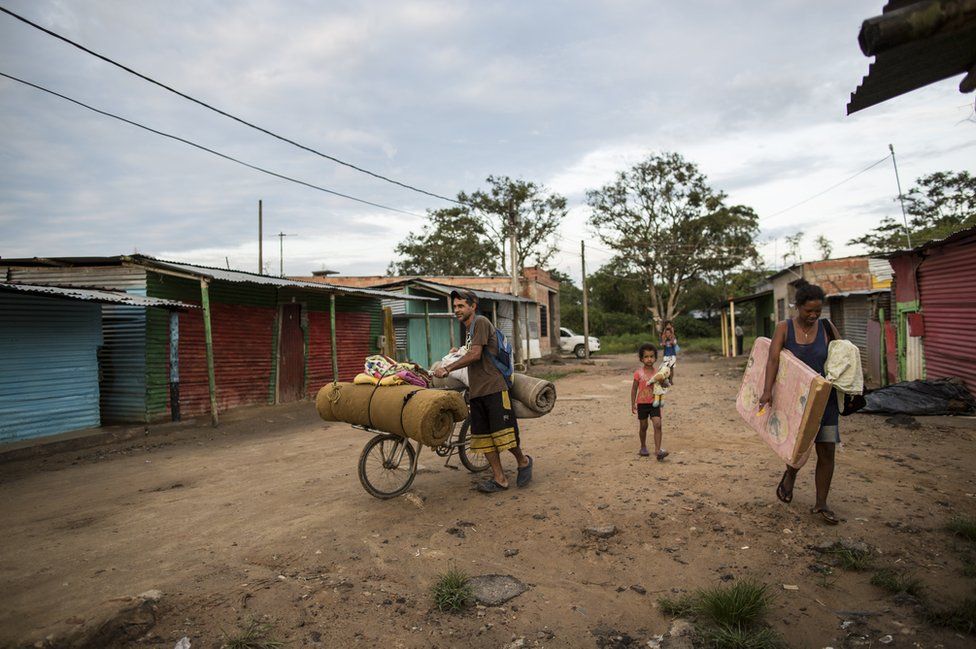 The river that marks the border between Colombia and Venezuela, at Cúcuta, has a legal crossing point and many illegal crossing points. Some are controlled by gangs and petrol and drug traffickers, as the economic conflict escalates other criminal activities.

Many schoolchildren use canoes to cross the border at Arauca each day.

In an emergency room in Maicao, Colombia, most of the migrants seeking healthcare are mothers with small children.

Diego has epileptic seizures – but because it is not an emergency, he is unable to access medical care. He is looked after by his grandmother, Stephanie. She has not been able to get in touch with her children or other grandchildren and does not know where they are.

“The work is hard – I have to walk a long way every day and most days I can’t afford to eat dinner, so we just go to bed,” says Stephanie.

“We are now living in a room with some other families and I am selling goods from a trolley every day at the Migrant Centre. This also means that Diego can go to the Child Friendly Space every day.”

“My greatest hope for him is that one day he can get the medical care he needs and be able to study properly.”

Sofia and her family moved into her sister’s hut, where there are now eight of them staying in one room, including a seven-month-old. Her mother’s brother will soon be moving in with his family and then there will be almost 20 people sharing two rooms.

“My hope is that one day we will have space, maybe even land. I hope to have a job and for my children to have a better future,” says Sofia.

Some of the rough sleepers near Gael and Olivia’s home have drug addictions and it can be dangerous. They and their four children began sleeping on the riverbank but it was very tough and after six months they tried to return to Venezuela. When they returned to their home, they found that everything had been stolen and so they returned to Colombia.

Elena is a mother of four children. She gave birth to Bianca after arriving in Colombia.

“When I gave birth to her I had to wait a really long time to be seen because I am Venezuelan and they attend to Colombian people first,” she says. “I gave birth stood up as I hadn’t been seen to and the baby had a broken arm because of this.”

Isobel is a qualified teacher but needed to leave Venezuela because of lack of work.

She and her husband, David, brought their one-year-old son, Samuel, with them but they had to leave their 11-year-old daughter behind with relatives so that she could go to school. Isobel is on her way to join family in southern Colombia and her journey will take 30 hours in total but she has been promised a job once there.

She hopes that soon her daughter will be able to join them.