Van ploughs into pedestrians outside hospital in China (PHOTOS, VIDEO) 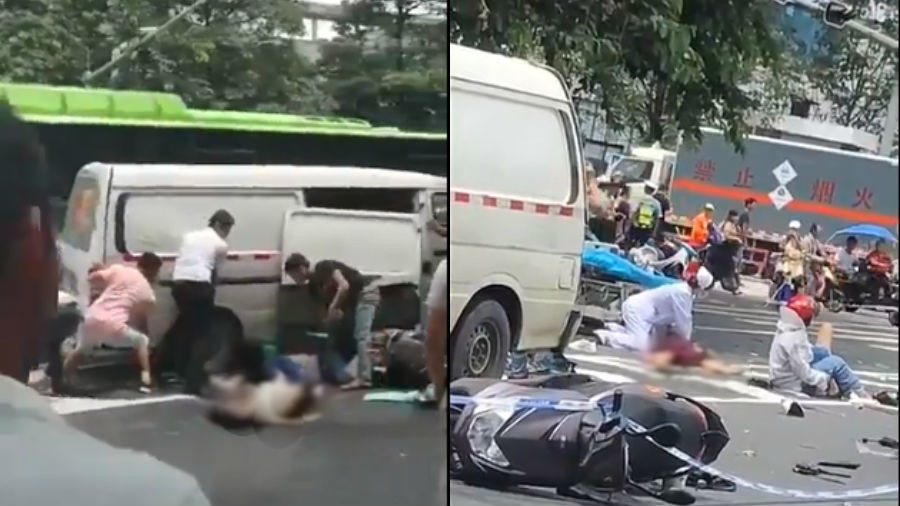 At least one person has been reported killed and several others seriously injured after an out-of-control van ploughed into pedestrians and motorcyclists in the southern Chinese city of Nanning before crashing into a pole.

The accident occurred on a road in front of the Taoyuan Road District Hospital just after 11.30am on Thursday morning, with eyewitnesses saying the van was transporting tableware at the time of the crash.

Images of the aftermath shared on social media show a devastating scene with bodies and debris scattered across the road. Hospital workers worked frantically to resuscitate victims, while a group of passersby helped to lift the van off people who were trapped underneath.

According to local media, the van crashed into vehicles waiting at traffic lights, hitting six electric bicycles, one three-wheel electric vehicle, and one bicycle. It continued driving until it collided with a pole.

The injured were sent to the People’s Hospital of Guangxi Zhuang Autonomous Region, with blood supplies and plasma rushed from the Nanning Central Blood Station due to demand for urgent blood transfusions.

Citizens have also reportedly turned up to donate blood at various donation clinics.

The driver of the van is now being questioned by police.

The cause of the crash is currently unknown.