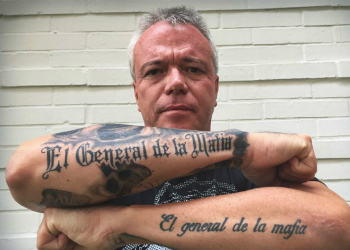 Authorities in Colombia working with US counterparts have arrested a self-proclaimed former hitman for Pablo Escobar, underscoring how the Andean nation continues to take down key figures in Medellín’s criminal world with help from the United States.

Jhon Jairo Velásquez Vásquez, alias “Popeye,” was arrested in Medellín on May 25 on charges of extortion and criminal conspiracy. Mayor Federico Gutiérrez confirmed the arrest in a tweet.

According to local media outlets, Popeye was arrested after appearing with his lawyer at the organized crime prosecutors’ office in Medellín, seeking to find out if he was being investigated.

In an interview last year, a source within the Oficina de Envigado — the collection of Medellín crime groups that controls most of the city’s underworld — told InSight Crime that Popeye was blackmailing frontmen for the late Escobar who had held on to assets linked to the Medellín Cartel’s illicit activities.

Sources close to the case who spoke to Colombian news media appeared to confirm this account.

“He was trying to recover property [and] money that he left years ago in the hands of narcos, and that very likely was inherited or received by their relatives, who are the ones who have been pressing and are the ones who denounced him,” a source told El Tiempo.

The same source told El Tiempo that the US Immigration and Customs Enforcement (ICE) agency participated in the investigation.

Popeye has claimed to have been the head of Pablo Escobar’s network of hitmen within the Medellín Cartel. He was sentenced to 52 years in prison in 1992 and confessed to participating in around 300 murders and ordering some 3,000 others.

After he was released early from prison in 2016, Popeye became a type of internet sensation and narco culture star, particularly in right-wing Colombian political circles.

The arrest of Popeye provides further evidence that US authorities have helped their Colombian counterparts secure a series of high-profile arrests of key figures in Medellín’s underworld, which has created a cycle of these individuals turning on one another.

Indeed, authorities in Colombia arrested top Oficina figure Juan Carlos Mesa Vallejo, also known as “Tom” or “Carlos Chata,” with help from US authorities in December 2017. And information obtained from InSight Crime’s source in the Oficina suggests this may have contributed to the takedown of Popeye.

The source said that Popeye was protected by Tom, and that the two were cooperating to extort old Medellín Cartel figures who had held on to Escobar’s assets after his 1993 death. After Tom was arrested and threatened with extradition to the United States, it’s possible that he helped authorities build the case against Popeye.

With help from the United States, authorities in Colombia have brought down other central figures in Medellín’s criminal landscape, like Diego Fernando Murillo, alias “Don Berna,” and Erick Vargas Cardenas, alias “Sebastian.” But these high-profile arrests have opened up space for the “Invisibles,” an emerging generation of Colombian drug traffickers who have adopted a more clandestine profile than their predecessors.