Trump Supporters Charged With Planning Attack On Democrats To Spark a “Movement” Had Massive Cache of Weapons, Court Docs Show 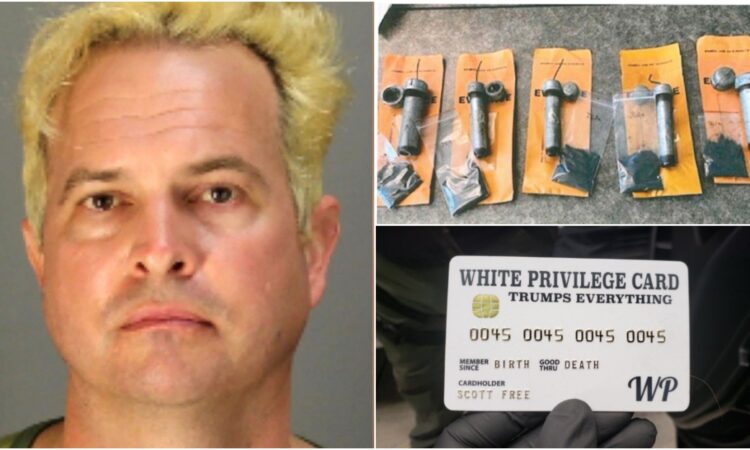 WASHINGTON – (DOJ) – On Friday, the federal court in San Francisco unsealed an indictment charging two California men with conspiracy to destroy a building affecting interstate commerce, and related crimes, in a scheme to attack the John L. Burton Democratic Headquarters in Sacramento.

According to court documents, Ian Benjamin Rogers, 45, of Napa, and Jarrod Copeland, 37, of Vallejo, began planning to attack targets they associated with Democrats after the 2020 Presidential election and sought support from an anti-government militia group. According to the indictment, the defendants planned to use incendiary devices to attack their targets and hoped their attacks would prompt a movement.

“Firebombing your perceived political opponents is illegal and does not nurture the sort of open and vigorous debate that created and supports our constitutional democracy,” said U.S. Attorney Stephanie M. Hinds. “The allegations in the indictment describe despicable conduct. Investigation and prosecution of those who choose violence over discussion is as important as anything else we do to protect our free society.”

“The FBI’s highest priority has remained preventing terrorist attacks before they occur, including homegrown plots from domestic violent extremists,” said Special Agent in Charge Craig Fair. “As described in the indictment, Ian Rogers and Jarrod Copeland planned an attack using incendiary devices. The FBI and the Napa County Sheriff’s Office have worked hand-in-hand to uncover this conspiracy and to prevent any loss of life.”

The indictment describes how Copeland and Rogers used multiple messaging applications and discussed the attacks on numerous occasions. For example, in late December 2020, Copeland told Rogers he contacted an anti-government militia group to gather support for the movement and in January 2021, Rogers told Copeland “I want to blow up a democrat building bad.” Copeland agreed, saying, “I agree” “Plan attack”. The agreed to start with the Democratic Headquarters in Sacramento and to “see what happens.” In one exchange, Rogers wrote to Copeland, “after the 20th we go to war,” meaning that they would initiate acts of violence after the inauguration on January 20, 2021.

According to court documents, on January 15, just four days after that exchange and five days before the trigger that Rogers and Copeland identified as the start of their campaign of violence, law enforcement officers searched Rogers’s home and business and seized a cache of weapons from Rogers’s home, including 45 to 50 firearms, thousands of rounds of ammunition, and five pipe bombs. Copeland allegedly also attempted to destroy evidence of the plan; after Rogers’s arrest, Copeland communicated with a leader of a militia group who advised Copeland to switch to a new communications platform and delete everything he had. Copeland agreed and when law enforcement obtained Copeland’s devices on January 17, Copeland’s communications with Rogers were missing.

Additional documents filed by the government argue that the defendants understood they would be viewed as domestic terrorists and hoped that their violent acts might start a movement to overthrow the government. In November of 2020, Rogers allegedly used encrypted messaging applications to tell Copeland that he would “hit the enemy in the mouth” by using Molotov cocktails and gasoline to attack targets associated with democrats, including the Governor’s Mansion and the Democratic Headquarters Building in Sacramento.

Rogers and Copeland are both charged with conspiracy to destroy by fire or explosive a building used or in affecting interstate commerce. Rogers is charged with additional weapons violations, including one count of possession of unregistered destructive devices, and three counts of possession of machine guns. Copeland is charged with an additional count of destruction of records. If convicted, the defendants face a maximum statutory sentence of 20 years imprisonment, a three-year term of supervised release, and a $250,000 fine for the conspiracy charge. In addition, Rogers faces a maximum of 10 years in prison for the weapons charge and Copeland faces a maximum of 20 years in prison for the destruction of evidence charge. A federal district court judge will determine any sentence after considering the U.S. Sentencing Guidelines and other statutory factors. Rogers also faces numerous state charges arising out of his possession of the pipe bombs and machine guns, and his possession of assault rifles prohibited under California law, and is being prosecuted for those offenses by the Napa County District Attorney’s Office.

The post Trump Supporters Charged With Planning Attack On Democrats To Spark a “Movement” Had Massive Cache of Weapons, Court Docs Show appeared first on Breaking911.

share on Facebookshare on Twitter
FULL VIDEO: Biden takes questions from the press, walks back claim that Facebook is ‘killing people’
Officials In Santa Barbara, Calif. Urge Face Masks For Everyone, Regardless of Vaccination Status