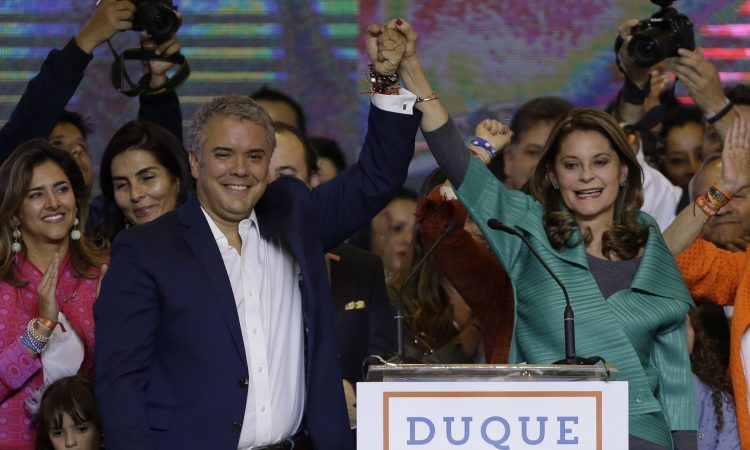 From the beginning, Colombia’s June 17 elections were heralded as being remarkably different from anything in the country’s electoral history. For starters, the election took place against the backdrop of a peace agreement President Juan Manuel Santos signed in November 2016 with the Revolutionary Armed Forces of Colombia (FARC), bringing to an end over five decades of civil conflict. While praised abroad (Santos was given the Nobel Peace Prize shortly afterward), the peace accord was the source of intense controversy at home and had an unexpected outcome: the emergence of a new political map.

The signing of the accords resulted in a reshaping around three clearly distinguishable camps: the right, around Ivan Duque (now President-elect); the left, around Gustavo Petro, the former mayor of Bogotá who, from August, will be a leading opposition voice in the Senate; and the center, a coalition of various forces led among others by the former mayor of Medellín Sergio Fajardo, who came only a few points behind Petro in the first round.

In the end it went to a run-off between Duque and Petro. The center was muted by an increasingly polarized campaign characterized by mutual fear, each camp accusing each other of radical extremism. For the Duquistas, a victory for their opponents would take the country down the path of populist, chaotic Venezuela, while the Petristas fomented the fear of an authoritarian Duque, a wrecker of the peace accords.

Hanging over Duque’s presidency is the shadow of former President Alvaro Uribe, a fierce opponent of the peace deal who remains leader of the Democratic Center (CD), the main party that backed Duque’s candidacy. Duque, however, is his own man. Although he counted on the support of Uribe, who has few rivals when it comes to electioneering, Duque earned his own nomination, displacing fellow partisans more closely associated with the hardcore Uribistas. Duque has a strong electoral mandate too—he won by a 12 percent margin and gained more than 10 million votes, the largest number historically received by any Colombian president.

His own record does not reveal him as a person of extremes. Duque spent a decade or so at the Inter-American Development Bank in Washington. Elected on a CD ticket to the Senate, he always cultivated the image of a technocrat with a strong command of economics, which he preserved during the campaign trail. He has been politically savvy, adding a good dose of pragmatism to his profile—as shown by his choice of Marta Lucía Ramírez, former minister of defense, as his running mate for the vice-presidency.

Duque has promised to introduce some modifications to the peace accord, as he reiterated in his victory speech. It is not yet clear what he wants to do—although one measure he has suggested is that FARC leaders with pending judicial cases in the special jurisdiction set up by the peace deal cede their allocated seats in Congress to other FARC members until their cases are solved.

Easier said than done. He will need to count on the approval of the Constitutional Court, an institution that has time and again exercised its autonomy in the past. He may find that, for pragmatic reasons, it is more convenient to go ahead with a peace process that goes hand in hand with a politically stable future, a situation much valued by his own followers and by potential foreign investors.

There is more certainty about his economic program. Duque will continue to pursue policies favorable to the free market, while making sure that his initiatives satisfy a wide range of interests—his victory speech also indicates his desire to see further expansion of the burgeoning middle classes. His main international challenge will be tackling the problems created by neighboring Venezuela, immersed in a deep and seemingly never-ending crisis.

What appears to have changed after the recent presidential contest is the party system. The new government’s party, the CD, founded in 2013, is there to stay as a main protagonist in the politics of the country—with high levels of militancy and discipline as well as a renewed leadership. Less clear is the prospect for the left. It does not constitute a single force. Rather than a party man, Petro is an individual leader with populist proclivities. He did manage to attract 42 percent of the vote in the second round, but many of the voters were centrist who saw him as a lesser evil than Duque. This means centrist parties, like the Verdes (Greens), may have a more prominent role in the future.

The vote ultimately demonstrated a complete realignment of the electorate. The polarized views of the candidates in the runoff show that partisan loyalties have shifted, and traditional Liberal and Conservative parties have now all but dwindled into insignificance. There will likely be a need for new organizations to replace these old parties. For now, the Colombian people are still waiting for them to emerge.