The Dept. of Defense has now officially responded to comments made by FOX host Tucker Carlson 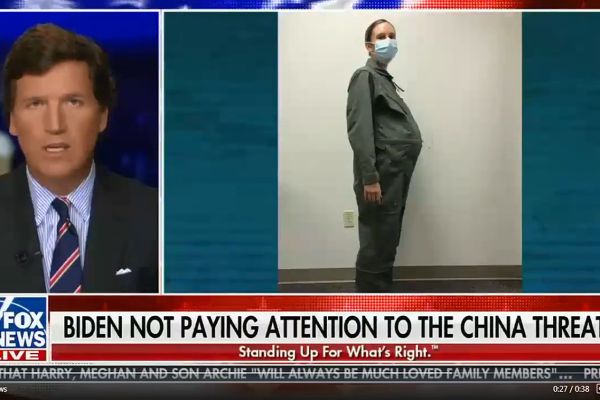 Military leaders were among those to publicly blast Tucker Carlson Thursday after the Fox News host made controversial comments about pregnant women serving in the military.

On his hit primetime show Tuesday night, Carlson scoffed that “while China’s military becomes more masculine as it’s assembled the world’s largest navy, our military needs to become, as Joe Biden says, more feminine, whatever feminine means anymore since men and women no longer exist. The bottom line is it’s out of control, and the Pentagon is going along with this.”

“So we’ve got new hairstyles and maternity flight suits,” Carlson said. “Pregnant women are going to fight our wars. It’s a mockery of the U.S. military.”

"Pregnant women are going to fight our wars. It's a mockery of the U.S. military," Carlson said. pic.twitter.com/515slvWCBZ

Later in the day, the Pentagon posted an official news release/article on their homepage:

The United States military is the greatest the world has ever seen because of its diversity, Pentagon Press Secretary John F. Kirby said during a news briefing this morning.

Kirby addressed this because a Fox cable show host used his show to denigrate the contributions of women in the military and to say the Chinese military is catching up to the U.S. military because it does not allow women to serve in the percentage the United States does.

Kirby addressed the insults to the entire U.S. military straight on. “I want to be very clear right up front, that the diversity of our military is one of our greatest strengths,” he said. “I’ve seen it for myself in long months at sea and in the combat waged by our troops in Iraq and Afghanistan. I’ve seen it up on Capitol Hill just this past month. And I see it every day here right at the Pentagon.”

Kirby shared a personal note. “One of the best decisions I ever made was becoming a Navy spouse myself, married to a terrific young naval officer who gave birth to our first child, and then went right back to work doing civil engineering for an air force base in Jacksonville,” he said.

Kirby reiterated Secretary of Defense Lloyd J. Austin III’s assertion that the American military works best when it represents all the American people. This is more than just having token minorities but having “the moral courage to include other perspectives and ideas into our decision making — perspectives that as the secretary himself noted Monday, are based on lived experience,” Kirby said. “It’s that experience and the professionalism and commitment of our people that has always been our decisive advantage.”

“To be sure, we still have a lot of work to do to make our military more inclusive, more respectful of everyone, especially women,” Kirby said.

There is a lack of women at senior ranks, Kirby said. “We pledge to do better, and we will,” he said. “What we absolutely won’t do is take personnel advice from a talk show host or the Chinese military. Maybe those folks feel like they have something to prove — that’s on them. We know we’re the greatest military in the world today and even for all the things we need to improve, we know exactly why that’s so.”

Carlson says he will address the response from the Pentagon on his program tonight.

The post The Dept. of Defense has now officially responded to comments made by FOX host Tucker Carlson appeared first on Breaking911.

share on Facebookshare on Twitter
LIVE: Biden to take victory lap, sign COVID relief bill
OPINION: It’s Time We Fight Back Against The Sexualization Of Children