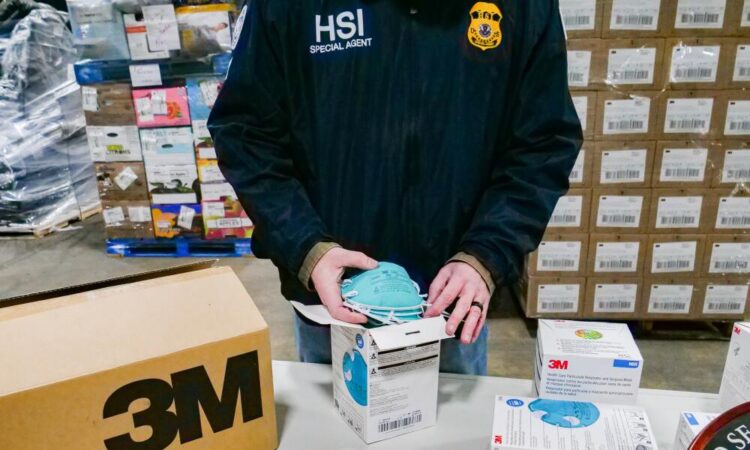 PORTLAND, Maine – More than two million counterfeit N95 masks purchased by the State of Maine were seized June 16, by Homeland Security Investigations (HSI) Special Agents. The seizure was the result of an ongoing investigation being conducted by multiple HSI Offices and United States Attorney’s Offices across the United States.

“The sale of counterfeit masks and other personal-protective-equipment constitute a serious threat to anyone who relies on PPE to protect themselves during the COVID-19 Pandemic,” said Acting Special Agent in Charge William S. Walker, who oversees HSI operations in New England, including Portland, Maine. “The seizure of counterfeit masks as well as the recovery of $3.6 million in funds used by the State of Maine to pay for this PPE material are steps that restore accountability in the supply chain. These efforts couldn’t be realized without the support of the U.S. Attorney’s Office for the District of Maine and the cooperation of the State of Maine.”

Since 2020, HSI has conducted enforcement actions across the country that have resulted in the seizure of almost 10 million counterfeit 3M N95 respirators.

Since many of the counterfeit masks are produced abroad, HSI is also working closely with its international law enforcement partners around the world to pursue leads into sources of supply and prevent shipments of counterfeit products from reaching U.S. shores.

Initial leads came to the HSI-led National Intellectual Property Rights Coordination Center through 3M, which shared reports of suspected counterfeits being purchased by hospitals and government organizations. HSI mobilized quickly, initiating multi-state investigations into the individuals and organizations looking to profit from the sale and distribution of counterfeit N95 respirators.

At the same time, HSI and 3M notified about 6,000 suspected victims of the fraud, in at least 12 states, including hospitals, medical facilities and others who may have purchased medical masks from the illicit dealers, urging them to immediately stop using the masks and to contact HSI immediately.

Since December of 2020, HSI has initiated over a dozen criminal investigations, across the U.S. and overseas, based on information received from 3M, about millions of counterfeit N95 respirator masks being sold to medical facilities and government agencies for use by hospital workers, first responders and others all over the country. The Cleveland Clinic and Washington State Hospital Association are just two of the many organizations that have reported receiving counterfeit respirators.

The HSI investigative actions are in addition to the efforts of Customs and Border Protection to identify and interdict these counterfeits at the border. HSI’s goal is to extend the border outward and intercept counterfeits before they have a chance to enter the U.S. and put frontline workers at risk.

HSI has strengthened its relationship with 3M and their counterfeit fraud team as part of HSI efforts launched under Operation Stolen Promise in April. Due to this relationship, 3M provided information that helped HSI, law enforcement and the public to identify counterfeit 3M respirators.