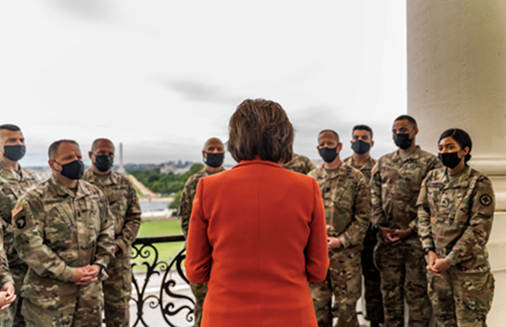 Washington, D.C. – Speaker Nancy Pelosi issued this statement on the final day of the National Guard deployment to the U.S. Capitol:

“The National Guard are American heroes and defenders of Democracy. Their presence in our temple of Democracy following January 6th, one of the most harrowing and horrific days in our history, has brought security, safety and healing to the Congress and indeed the Country. The United States Congress is profoundly grateful for their selfless service.

“It is imperative that Congress continues to take action to honor the sacrifice of law enforcement and to protect the Capitol and ensure that an attack can never again be perpetrated against it. Now that the House has passed bills to establish an independent bipartisan January 6th Commission and to fund additional security for the Capitol, the Senate must act. There is no time to waste or room for partisanship in keeping our Capitol and Country safe.”

BREAKING: Roughly 4 months after the deployment began, the National Guard's mission to secure the U.S. Capitol will come to a close Sunday night, with its mission officially ending Monday morning at midnight – WUSA