HomeNewsNairo Quintana on Chris Froome boos: Sometimes you reap what you sow
News

Nairo Quintana on Chris Froome boos: Sometimes you reap what you sow 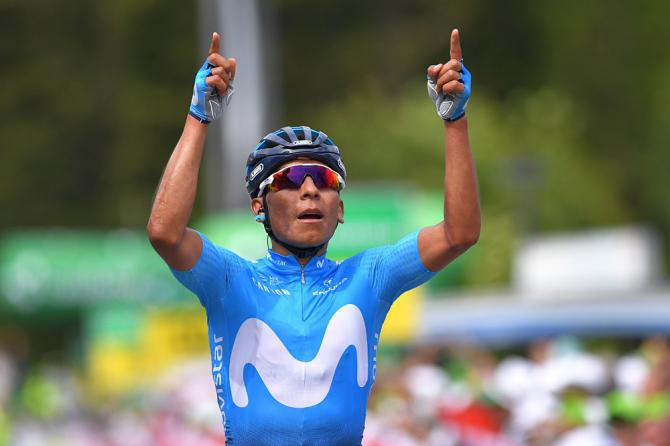 Nairo Quintana fanned the flames of his old rivalry with Chris Froome on Friday, suggesting that the boos, whistles, and jeers that greeted the Briton at the Tour de France teams presentation the previous evening weren’t entirely unwarranted.

Froome, who has won the Tour on each of the three occasions Quintana has finished on the podium, was cleared of wrongdoing in his salbutamol case on Monday after a nine-month procedure, which saw ASO attempt to block him from taking part in the Tour. Home favourite, Romain Bardet called on the French public to respect Froome, but it was evident on Thursday the ill-feeling had not cleared with the verdict.

On Friday, Quintana’s Movistar team gathered for their pre-Tour press conference in Cholet, and each of their three leaders – Quintana, Mikel Landa, and Alejandro Valverde – were asked to comment on the reception Froome received.

“It’s not pleasant. It’s not good for our sport, and I hope from now on people avoid doing it,” said Quintana.

However, apparently referring to Froome’s conduct in the past, he added: “Sometimes you reap what you sow.”

Later in the press conference, Quintana said that it’s “neither better nor worse” for him that Froome is present and correct at the Tour. “We always do our own race, our own preparation. There are always rivals to go up against. It’s better that he’s here and that his situation has been resolved, and we go on now.”

For his part, Valverde noted that “it isn’t nice for anyone” that Froome was whistled and booed.

“It’s bad that he had to take that from the public,” said the Spaniard. “I think they were already aware of what might happen. Tomorrow the race begins and we hope to talk about the race and the sport, and not the whistles.”

As for Landa: “I wouldn’t like to be whistled either. There’s more and more rivalry in sport, with social media and everything, and it’s leading to more heated behaviour – some people love you more, but some people hate you more as well.”

Quintana comes into the 2018 Tour with no little pressure on his shoulders. He has been touted as a sure-fire future winner of the Tour since he turned pro, and even if he has three podium finishes to his name, he has yet to fulfil that so-called sueño amarillo – ‘yellow dream’.

Last year, he was a shadow of his former self as he struggled in the wake of an exacting Giro d’Italia, where he finished second. Movistar had lined up the Giro-Tour double thinking Quintana might go better in his second Grand Tour, but that model has quickly been abandoned, and everything this year has been geared around July.

“For me, this year is completely different to last year,” Quintana said. “I’ve arrived here fresh, in very good condition, and above all with a lot of motivation. I want to do well. I’m feeling good mentally and I’m ready to enjoy this Tour.”

There is no shortage of the mountainous terrain on which Quintana excels, with tough blocks and explosive stages in the Alps and Pyrenees, but in order to make it to his ‘home turf’, the lightweight climber will have to survive a first week in which he’ll be playing very much away from home. Coastal winds, narrow roads, a team time trial, and of course cobblestones will all contribute to a treacherous first nine days.

“For me, and for us as a team, it will be very important to avoid losing time on those stages. Most important of all will be to get through the cobbled stage. Any rider – it could be anyone – could fall out of contention there,” he said.

Once in the mountains, Quintana insisted he wants to ride an aggressive race. He has been criticized in recent Tours for a perceived lack of willingness to take big risks in order to destabilize Froome, but his audacious long-range effort at the recent Tour de Suisse – which yielded a stage win if not the overall – was perhaps a sign of a change of approach.

“It’s a case of differing race strategies, and also of the form you’re in,” Quintana said.

“A lot of the time, attacking from far out, if you have lots of riders with you from behind it doesn’t make sense, knowing there are forces behind. Also, a one-week race is different to a three-week race. You have to go along analysing at all times, thinking not just about what could happen over the course of that stage but over the course of the three weeks. I would like to always be on the front foot, attacking, attacking, but you have to look at the bigger picture.”

The theme that dominated the Movistar press conference was that of how they are going to balance the ambitions of three leaders.

“We have to get to the mountain stages well positioned on GC and from there whoever is stronger will rise to the top,” said Quintana, towing the party line.

“At Movistar, we’ve often worked like this in the past. We know how to do it and deal with it. We’ve never had problems, and I don’t see us having problems this year. On the contrary, we hope to be able to finish it off, with the yellow jersey in Paris.”

Then came another intriguing comment. Quintana was asked about his contract situation, with another year remaining on his current Movistar deal, and initially insisted he would see it through, before suggesting he was open to offers. At last year’s Tour de France, rumours began to circulate of a possible mid-contract move and, although they have since calmed down, there is always the suspicion of how amicably he and Landa can share that leadership status.

“If there’s something that characterizes me, it’s that when I start something I finish it,” said Quintana. “I have a contract for next year, and I hope to be able to fulfil it. It’s all good, we’re calm, that’s how it is. If Eusebio [Unzué, team manager] offers for me to stay, then I’ll stay.”

However, laughing, he added: “If there are offers, they are welcome.”

As one Spanish journalist noted, he was laughing, but he doesn’t say things he doesn’t mean.