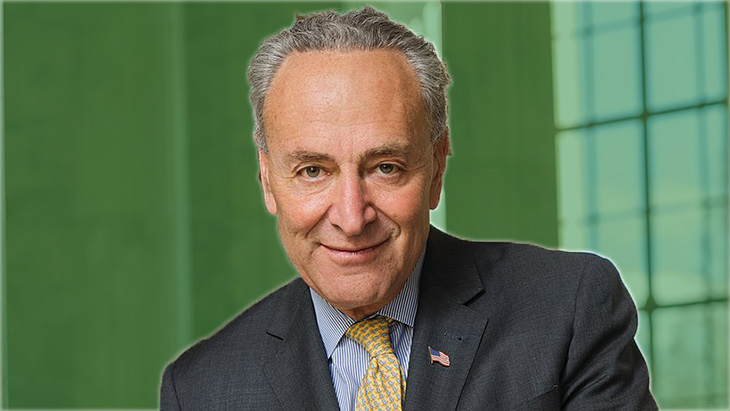 .@SenSchumer on marijuana legislation: "Over the past decade Americans attitudes towards marijuana have undergone a dramatic transformation."

Ending the federal prohibition on cannabis is becoming increasingly urgent as more and more states continue to legalize adult and medical use of cannabis. Despite the fact that cannabis is illegal under federal law, the majority of Americans live in a state where cannabis is legal in one form or another and more than 90 percent of Americans believe it should be legalized for either adult or medical use.

The Cannabis Administration and Opportunity Act would ensure that Americans in all communities will not be arrested or barred from receiving essential services for using cannabis where it is legal. This proposal would also ensure state-compliant cannabis businesses will be able to access the essential financial services and will preserve the integrity of state cannabis laws while providing a path for federal regulation.

Importantly, this legislative proposal goes a step beyond legalizing cannabis by expunging federal non-violent marijuana crimes and allowing individuals currently serving time in federal prison for non-violent marijuana crimes to petition a court for resentencing. It will also establish a fund to reinvest in the communities that were hurt by the War on Drugs and provide restorative justice to communities of color.

Senators Booker, Wyden, and Schumer thank Senator Murray and her HELP Committee staff for their work in developing the Food and Drug Administration and public health components of the Discussion Draft.

“I am proud to introduce our discussion draft of the Cannabis Administration and Opportunity Act, a legislative proposal aimed at finally putting an end to the federal prohibition of cannabis and addressing the over-criminalization of cannabis in a comprehensive and meaningful way,” said Majority Leader Schumer. “The War on Drugs has too often been a war on people, and particularly people of color. Not only will this legislation remove cannabis from the federal list of controlled substances, but it will also help fix our criminal justice system, ensure restorative justice, protect public health, and implement responsible taxes and regulations.”

“Cannabis prohibition, a key pillar of the failed War on Drugs, has caused substantial harm to our communities and small businesses, and especially for communities of color,” said Senate Finance Committee Chair Wyden. “It’s as simple as this: Senators Booker, Schumer and I want to bring common sense to the federal government, end prohibition and restore the lives of those hurt most and set them up for opportunity.”

“For decades, our federal government has waged a War on Drugs that has unfairly impacted low-income communities and communities of color,” said Senator Booker. “While red and blue states across the country continue to legalize marijuana, the federal government continues to lag woefully behind. It is time for Congress to end the federal marijuana prohibition and reinvest in communities most impacted by the failed War on Drugs. I am proud to introduce this landmark piece of legislation with Senator Wyden and Majority Leader Schumer that will finally turn the page on this dark chapter in American history and begin righting these wrongs.”

Summary of the discussion draft of the Cannabis Administration And Opportunity Act:

The War on Drugs has been a war on people—particularly people of color. The Cannabis Administration and Opportunity Act aims to end the decades of harm inflicted on communities of color by removing cannabis from the federal list of controlled substances and empowering states to implement their own cannabis laws.

Federal cannabis reforms are especially urgent as more and more states legalize the adult and medical use of cannabis. To date, the adult use of cannabis is legal in 18 states, the District of Columbia, the Commonwealth of the Northern Mariana Islands, and Guam; and 37 states, the District of Columbia, Puerto Rico, Guam, and the U.S. Virgin Islands have advanced laws to allow medical cannabis, with nearly all Americans living in a state where some form of cannabis is legal. These changes represent a dynamic shift in public opinion and support across the political spectrum. Today, more than 90 percent of Americans believe cannabis should be legal either for adult or medical use. Despite legalization under state law and broad public support for cannabis legalization, cannabis remains illegal under federal law.

By ending the failed federal prohibition of cannabis, the Cannabis Administration and Opportunity Act will ensure that Americans – especially Black and Brown Americans – no longer have to fear arrest or be barred from public housing or federal financial aid for higher education for using cannabis in states where it’s legal. State-compliant cannabis businesses will finally be treated like other businesses and allowed access to essential financial services, like bank accounts and loans. Medical research will no longer be stifled.

But this alone is not enough. The Cannabis Administration and Opportunity Act includes restorative measures to lift up people and communities who were unfairly targeted in the War on Drugs. The bill automatically expunges federal non-violent marijuana crimes and allows an individual currently serving time in federal prison for non-violent marijuana crimes to petition a court for resentencing.

The legislation also creates an “Opportunity Trust Fund” funded by federal cannabis tax revenue to reinvest in the communities most impacted by the failed War on Drugs, as well as helping to level the playing field for entrepreneurs of color who continue to face barriers of access to the industry. Importantly, the legislation also ends discrimination in federal public benefits for medical marijuana patients and adult use consumers. The legislation preserves the integrity of state cannabis laws and provides a path for responsible federal regulation of the cannabis industry. Like with federal regulations on alcohol, states can determine their own cannabis laws, but federal prohibition will no longer be an obstacle. Regulatory responsibility will be moved from the U.S. Drug Enforcement Agency (DEA) to the Alcohol and Tobacco Tax and Trade Bureau (TTB), the Bureau of Alcohol Tobacco Firearms and Explosives (ATF), as well as the Food and Drug Administration (FDA) to protect public health. Additionally, revenue generated by federal taxes will support restorative justice and public health and safety research.

U.S. Senators Cory Booker, D-N.J., Ron Wyden, D-Ore., and Chuck Schumer, D-N.Y., (collectively referred to in this document as the “Sponsoring Offices”) are committed to turning the page on this sad chapter in American history and undoing the devastating consequences of current discriminatory cannabis policies. As such, they are seeking feedback from the public as they finalize their proposal. The Cannabis Administration and Opportunity Act discussion draft is a detailed legislative proposal meant to spur a robust discussion among stakeholders in order to inform the Sponsoring Offices as they work to craft a final legislative proposal. The Sponsoring Offices request comments from stakeholders and members of the public, including social and criminal justice advocates, industry stakeholders, members of the public health and law enforcement communities, members of Congress, federal officials, state and local officials, and others for review and comment.