HomeNewsPolice Fined People For This Rad Video. But Why Should Cars Get More Space Than Skateboards?
News

Police Fined People For This Rad Video. But Why Should Cars Get More Space Than Skateboards? 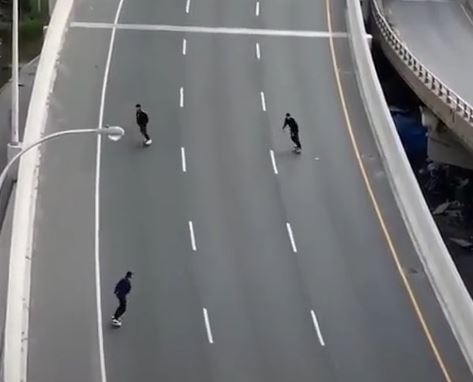 This week a video of three people skateboarding on Toronto’s Gardiner Expressway was shared on TikTok and then made the social media rounds. The short clip sees the skaters dressed in black and cruising down the controversial structure—an elevated highway that runs through the middle of downtown, cutting off Toronto’s waterfront and costing millions of dollars each year to upkeep—without a care in the world. It’s rad as hell, like watching something out of a video game. I keep expecting one of the skaters to find a hidden tape.

The video was originally posted by photographer Morgan Smith on Instagram. Smith later took down the video when he saw the clip was being investigated by Toronto Police, who presumably wanted to enforce laws that say skaters should not do something badass in a place they’re not supposed to. Three men were fined $110 each for the stunt, according to the Toronto Star.

But after repeatedly watching the incredible video I was left asking myself a question…why should the cars get more space than the skaters? On one hand it seems like a hopelessly juvenile question. The sort of shit I would have fought against in middle school. But on the other hand, especially right now,… why the fuck should cars get more space than skaters?

For most of the pandemic Toronto’s streets remained open for cars despite the fact driving in the city has been significantly reduced. Meanwhile people on sidewalks are forced to crowd close together in order to get from one place to another and public parks are policed with strict rules. It has left people extremely pissed off, to the point where Mayor John Tory and the city staff had to shift their public health advice. They’re going to start opening up the streets for pedestrians and cyclists like they should have done in the first place. It’s a good step forward and maybe something we should think about keeping permanently. Because we could totally keep it permanently if we wanted.

Speaking with Glyn Bowerman, host of Spacing Radio, a podcast about urbanism in Canada, the idea of a car centric city isn’t something that we always believed in.

“It’s a hold-over from some very old, very shortsighted planning policy,” Bowerman said. “After the Second World War, cities started expanding outward, building spacious suburbs, full of bungalows, and rapidly expanding the highway system, sometimes right through old downtown neighbourhoods. Car ownership was up. Space and privacy and picket fences were the ideal. The city was seen as a place to move in and out of, or through, but not live in.”

With the pandemic highlighting the need for more human space, now seems like a perfect opportunity to ask big questions about the type of city we want Toronto (which could be any North American city really) to be when things open back up. For Bowerman, that might mean a less car-centric Toronto.

“I’m not a city planner. But there have been countless studies and important advocacy about the damage car culture has done to cities. This pandemic and the need for social distancing has really put a fine point on it: pedestrians, cyclists, skateboarders, whatever, are still an afterthought. It’s frustrating and frequently deadly. So it seems obvious to me, it’s time to reclaim the space we lost 70 years ago. Cars are a useful tool, but they shouldn’t be the price of admission to life in the metropolis,” he said.

So could the Gardiner be converted into a skateboard friendly strip, a place where people pull off totally sick grinds while skyscrapers slowly render in the background while giant glowing S-K-A-T-E letters float overhead?

The concept of revitalizing elevated urban spaces for pedestrians isn’t new. New York’s Highline opened in 2009, converting an abandoned railway track into a nearly two miles of park strip. The park—which was inspired by the Promenade Plantée in Paris—has become a favourite tourist destination. A similar structure called The 606 opened in Chicago in 2015.

Because Toronto is obsessed with copying things that happen in New York and Chicago first, the city does have its own Highline-esque space planned tentatively called The Green Line. Underneath the Gardiner is also being used for public space: The Bentway has a public skatepark and hosts large scale events each year. These things are certainly steps in the right direction, but I desperately want things to be taken a step further.

I’d love to see skateboarders on the Gardiner all the time instead of cars, like the whole city was one giant sponsored ad for Red Bull.

share on Facebookshare on Twitter
I Spent a Weekend Bingeing Airbnb’s Virtual Experiences. Was it Worth It?
China starts major trial of state-run digital currency