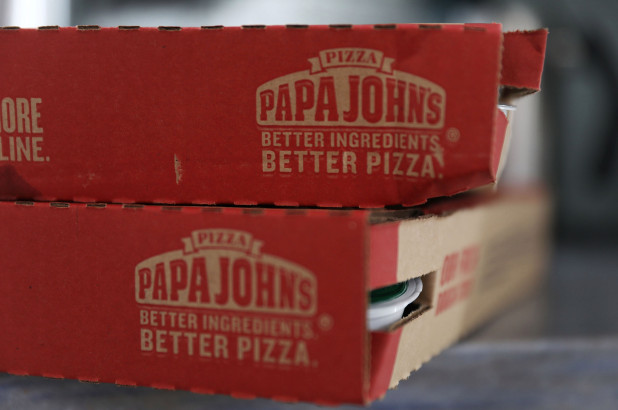 Papa John’s said sales are jumping as customers hunkered down amid the coronavirus crisis have been ordering up pizzas for delivery, even as they steer clear of its restaurants.

The pizza chain said Tuesday that its comparable sales in North America rose 5.3 percent in the three months ending March 29 even as the pandemic roiled the dining industry. Papa John’s is “nearly fully operational” in most of its markets even though restrictions aimed at stemming the spread of the virus have forced some restaurants to close, president and CEO Rob Lynch said.

Papa John’s announced plans last week to hire 20,000 workers as the coronavirus crisis put millions of Americans out of work. The chain is also offering “no contact” deliveries — in which the pizza is left outside the customer’s door in a sealed box — to protect diners and employees alike.

“Our international and domestic businesses have performed well, as customers and communities rely on us and others in the food delivery industry,” Lynch said in a business update to investors.

The company nevertheless pulled its fiscal outlook for 2020 because “there are many uncertainties related to the COVID-19 pandemic which cannot be predicted.” Rival pizza purveyor Domino’s did the same on Monday.

Papa John’s reported the sales growth amid calls for celebrity spokesman Shaquille O’Neal to be removed from the company’s board. Corporate advisory firm Institutional Shareholder Services reportedly recommended investors vote against O’Neal’s election to the board because he’s missed several meetings.

Papa John’s chairman Jeff Smith, who heads up activist investing firm Starboard Value, defended the former NBA star, saying he has made “important contributions” since joining the board last year.

Papa John’s North American sales numbers were weaker in March as large gatherings such as sporting events were canceled because of the virus, Lynch said. The chain posted comparable sales growth of just 3.9 percent from Feb. 24 to Sunday, down from 5.4 percent and 7.6 percent in the prior two monthlong periods.

International comparable sales dropped 0.6 percent over the last month as about 350 of the roughly 2,100 Papa John’s franchise stores abroad closed because of government policies, the company said. International sales eked out a 2.3 percent gain for the last three months thanks to growth earlier in the year.

Institutional Shareholder Services changed its tune Tuesday, saying O’Neal should be re-elected given that his “poor attendance occurred during the year he was appointed to the board.”