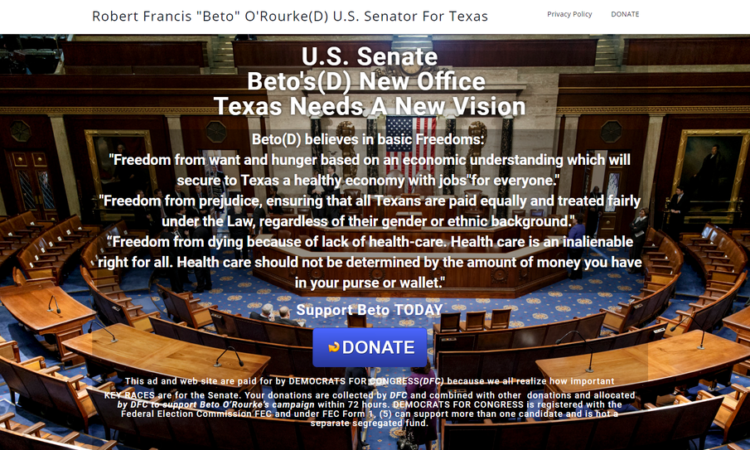 U.S. Attorney Audrey Strauss said: “In impersonating campaigns and candidates to raise money for fake political action committees, John Pierre Dupont took advantage of thousands of vulnerable individual donors who believed they were contributing to causes they believed in. Instead, hundreds of thousands of dollars that were intended to be legitimate donations were instead stolen by the defendant for his own personal enrichment. With today’s guilty plea, Dupont has admitted to his scheme and now faces a significant term of incarceration.”

According to the allegations in the Indictment, court filings, and statements made during court proceedings:

From 2015 through 2019, Dupont defrauded thousands of donors who believed they were donating to three political action committees established by Dupont(the “Scam PACs”), or to campaigns the Scam PACs falsely claimed to support. His scheme resulted in hundreds of thousands of dollars being donated through websites he controlled and operated, none of which was donated to campaigns or causes.

The websites purported to be raising money in support of senate campaigns and candidates, a candidate for governor, and a candidate for president. Another website operated by Dupont purported to be raising money “to unite immigrant families,” falsely claiming that donations to the Foundation for Sanity in Politics PAC would “go to help pay our volunteer attorneys’, doctors’, nurses’ and social workers’ costs and pay for transportation to unite immigrant families.” In fact, that PAC had no volunteers or staff, and dedicated no funds to paying for any action or advocacy.

Dupont’s scheme targeted victims throughout the country, raising funds based on fraudulent representations that the donations would support the relevant causes, candidates, and campaigns. In reality, all of the money raised was kept and used by DUPONT, including to continue perpetrating the fraud through additional fundraising and overhead expenditures. None of the money donated to the Scam PACs was spent on political contributions, and Dupont failed to report the donations, as required, in filings with the Federal Election Commission.

DUPONT, 82, of Blythe, Ca, pled guilty to one count of wire fraud, which carried a maximum sentence of 20 years in prison, and one count of aggravated identity theft, which carries a mandatory two years in prison consecutive to any other sentence imposed. The maximum potential sentence in this case is prescribed by Congress and is provided here for informational purposes only, as the defendant’s sentence will be determined by the judge. Sentencing before Judge Berman is scheduled for October 21, 2021, at 10:00 a.m.