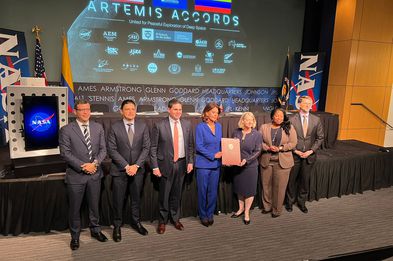 During a ceremony at NASA Headquarters in Washington Tuesday, May 10, the Republic of Colombia became the 19th country to sign the Artemis Accords. NASA Deputy Administrator Pam Melroy participated in the signing ceremony for the agency and Vice President and Foreign Minister Marta Lucía Ramírez signed the Artemis Accords on behalf of Colombia.

The Artemis Accords establish a practical set of principles to guide space exploration cooperation among nations, including those participating in NASA’s Artemis program.

“NASA is proud to have Colombia join the family of nations signing the Artemis Accords,” said Melroy. “Our efforts to create a sustainable presence at the Moon and later Mars requires the partnership and expertise of a diverse and robust cadre of nations that embrace peaceful exploration of space. We look forward to our future collaborations with Colombia as the world explores together.”

Colombia is the third Latin American country to sign the Artemis Accords, following Brazil and Mexico.

“I am very honored being here today at NASA signing the Artemis Accords representing Colombia in a very significant moment of the bilateral relationship as we celebrate this year the 200th anniversary of the U.S. – Colombia diplomatic relations,” said Ramírez. “It is a substantial steppingstone for my country as we continue to develop our knowledge, national capacity, and understanding of the importance of space for future generations of Colombians to come.”

NASA, in coordination with the U.S. Department of State, announced the establishment of the Artemis Accords in 2020. The Artemis Accords reinforce and implement the 1967  Outer Space Treaty. They also reinforce the commitment by the United States and partner nations to the Registration Convention, the Rescue and Return Agreement, as well as  best practices and norms of responsible behavior that NASA and its partners have supported, including the public release of scientific data.

Additional countries will sign the Artemis Accords in the months and years ahead, as NASA continues to work with its international partners to establish a safe, peaceful, and prosperous future in space. Working with both new and existing partners will add new energy and capabilities to ensure the entire world can benefit from our journey of exploration and discovery.

Learn more about the Artemis Accords at: