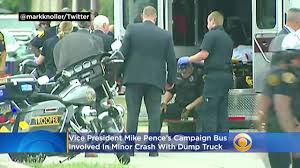 Two Pittsburgh Police motorcycle officers with the Special Deployment Division were involved in a collision on Route 837 in White Oak, PA just before 11:40 a.m.

The cause of the collision is being investigated. The crash comes after a separate minor collision involving a bus in the motorcade.

“Pittsburgh Public Safety would like to thank Vice-President Pence and members of the United States Secret Service for the concern and attention they showed the two injured officers,” police wrote in a statement. “Vice-President Pence stopped to tend to the officers personally; a gesture that was greatly appreciated by the officers themselves, and by the Pittsburgh Bureau of Police.”

Grateful for all of the law enforcement officers who support us and help get us safely to where we are going each day. Thank you for all you do!