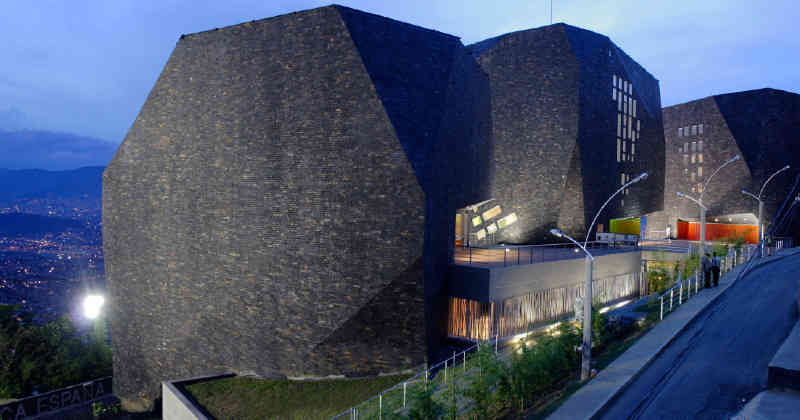 Biblioteca España is perched atop Santo Domingo Savio, standing alongside one of Medellin’s poorest neighbourhoods while taking in a panoramic view of the city. It had been one of the city’s many modernist prestige projects that reflected a city that was transforming itself from its violent past.

After having spent $15 billion pesos on its construction, the library was opened in 2007 with the promise of rejuvenating the neighbourhood it was gifted to. Seven years later, however, significant structural defects were noted in the building’s foundations and it was closed in October 2015.

The building was designed by Colombian architect Giancarlo Mazzanti and, after foundational defects were found, the finger-pointing since then has been in all directions. Some believe Mazzanti himself is to blame, others that that the engineers of the firm Arquitectura y Concreta didn’t follow the specifications in enough detail.

Many also believe the political pressure from former Mayor Sergio Fajardo, who was pushing for the project to be finished quickly, was the main reason for the failure of the project. The library remains one of Fajardo’s major failures as mayor. What was to be a powerful symbol of Medellin’s transformation–and connected two other crucial investments in Parque Arví and the cable car–had now become Medellín’s white elephant.

“For us it was a place we could go to relax, where we could go to learn and do new projects,” Local artist and English teacher Jhon said of the importance of the library in the neighbourhood.

“Lots of people want to know what’s going on with this space,” the 20-year-old Jhon said, “We can’t lose it. It’s a place where people can learn. It’s not just a library, it’s a place that represents the neighbourhood’s education.”

Biblioteca España now remains indefinitely closed and the community have not been informed as to when the library will be open to the public again. Remarkably, however, the library remains online despite not having a building for itself. As a result, tourists still visit the site and are confused on seeing a building closed off, held together by scaffolding and draped in plastic.

Maria Clementina, who runs a women’s group intended for victims of domestic and gender violence within the community believed that the space could have been used as a starting point by which to reduce the neighbourhood’s worst traits.  “Its a white elephant built with many hopes for the community. It gives us a lot of sadness that this project was lost,” she said to us.

Meanwhile, the library’s collection has been split across many existing libraries nearby.  “The most important thing for us was to keep the library and the library idea alive,” a library staff member that has been with the library for the last 6 years said to The Bogotá Post.

The library staff member, who did not wish for their name to be disclosed, said that the staff saw the move as challenging but not frustrating. “It has been a opportunity to learn. It has allowed us to reach other territories and other neighborhoods because it has meant a decentralization of services so that we are not just in one place.”

“The project has meant a possibility of transformation,” the staff member at Biblioteca España continued, recognising that the community had come to benefit greatly from the building. However, they also felt that as they can still provide services to the people so  “there is no urgency or need for the building to open again.”

This sentiment is reflected in the slow pace of progress in finding a solution to reopening the edifice. The suggestions have been to demolish the building and start again or rebuild the structure from what they have now. In any event, the costs of the project won’t be any less than what it cost to build in the first place–with some estimates at a further $16 billion pesos. The community members we spoke to, however, are pessimistic that their library will be returning any time soon.