HomeNewsMedellin temperature increase 1.7 ° C in a half century
News

Medellin temperature increase 1.7 ° C in a half century 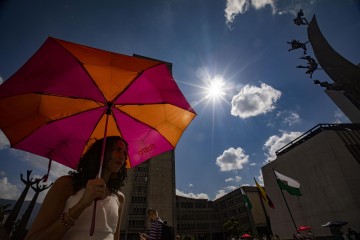 With a growth of 0.35 degrees per decade, the city is hotter than before. Urban development is also a factor of the phenomenon. Experts reveal the effects. Heavy downpours, hail, or on the other hand the heat of some days, are facts that are related to the temperature increase in Medellín. Yes, because although it may not seem like it, warming favors both extremes. According to the Ideam historical records, based on a sensor located at the Olaya Herrera airport, since 1970 the city has been at least 1.7 ° C hotter. That at the local level the effects, among others, may be: extreme rains, floods, droughts, frequent forest fires or alteration in ecosystems of fauna and flora. Temperature monitoring is a task that Ideam has been doing without interruption since 1941 in Medellín. At that time, the airport radar registered an annual average of 20.7 ° C. Then, in 2012, the average showed 23.4 ° C. And with data from last year, the city marked 24.1 ° C. However, the director of the local Early Warning System (Siata), Carlos David Hoyos, noted that these calculations, although indicative, are not conclusive and should be counteracted with variables such as minimums and maximums, or the occurrence of El Niño O La Niña phenomena.

Although Ideam recorded that last year the average temperature was 24.1 ° C, Leonardo Ruales, coordinator of the Regional Center for Forecasts and Alerts of Antioquia, stressed that it should be taken into account that in the dry season peaks that exceed 30 °.