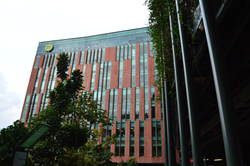 Soon, Medellín will join San Francisco (USA), Tokyo (Japan), Beijing (China) and Mumbai (India) as one of the few cities in the world to become a headquarter for The Center for the Fourth Industrial Revolution.

Recognized in 2013 as “The World’s Most Innovative City” by the non-profit, Urban Land Institute, Medellín has become more well-known globally as an attractive location for cutting-edge companies and startups, especially in the software development world.

More recently, the Lee Kuan Yew World City Prize 2016 was granted to Medellín in recognition of the city’s transformation. This international award honors outstanding achievement and highlights contributions to the foundation of habitable, vibrant and sustainable urban communities around the globe.

According to Forbes, Medellín appears to rank in the top 7 best places to live after retirement. This ranking reflects positive aspects such as its weather, infrastructure and public spaces.

As for how the business environment goes, Medellín’s Chamber of Commerce estimates that over 60,000 entrepreneurs have created or renewed projects with companies with a strong focus on software development and ICT in the last year.

The same study points out that innovation in Medellín generates a third of all new jobs and the city is already investing 2.14% of its GDP in science, technology and innovation-related activities.

According to the Fourth Industrial Revolution, an initiative driven by the World Economic Forum (WEF), the participant cities are meant to be hubs for global cooperation to develop policy frameworks and advance collaboration that accelerates the benefits of science and technology.

The Medellín center will be located in the famous “Ruta N” building, a hub that was created in 2009 to consolidate a knowledge environment and generate conditions that favor business and entrepreneurship.

Official operations will start on March 31st, requiring an investment between $1.5 and 2 million per year. According to the WEF, IoT, AI and Blockchain are some of the many technologies that the center will be working with. There are already three strategic ongoing projects on the table.

The first project is focused on improving the processes and effectiveness of control entities using AI to identify irregularities in their systems such as tax evasion, contraband or undue payments.

Based on the same AI technology, the center will also have a project dedicated to strengthening criminal policy and citizen security in order to integrate data in the reconstruction of evidence for criminal cases.

The third project seeks to spread broadband all across the country and define policies for the implementation of this infrastructure.

The World Economic Forum is not the only organization to recognize Medellín as a great option for breeding technology projects. In fact, tech companies from different parts of the world, and especially, the United States, are no strangers to Medellín’s innovative revolution.

A stable economy and reliable political environment are two significant factors to consider when choosing a place to outsource software projects and tech companies worldwide.

But there are also many other reasons to choose Colombia’s trendiest city when it comes to hiring tech talent. The geographical proximity and overlap in time zones with the US and other countries in the Americas and Europe facilitates real-time collaboration among co-located teams.

In addition, there’s a young and growing tech talent pool in Medellín. Universities with robust IT programs yield enough programmers to easily grow an employee base. According to Colombia’s Ministry of Education, between the years of 2001 and 2010, there were over 100,000 Computer Science graduates in Medellín, making it fourth on the list of careers with the highest number of graduates in the whole country. Also, there are more than 42 education centers offering other IT careers and trainings.

Top that with excellent English skills and cultural similarity, companies have the perfect combo for developing all sorts of software products and trying different options like nearshore outsourcing.

The Center for the Fourth Industrial Revolution is not the only exciting tech project the city has in store for the next few years. As a matter of fact, Medellín is the only city in the whole country with a science, technology, and innovation public policy (Agreement 24, 2012), with a budget of $240 million. This resource will be used for programs and projects targeting the development of a knowledge-based organization that will focus on improving energy, health and IT sectors until 2021.