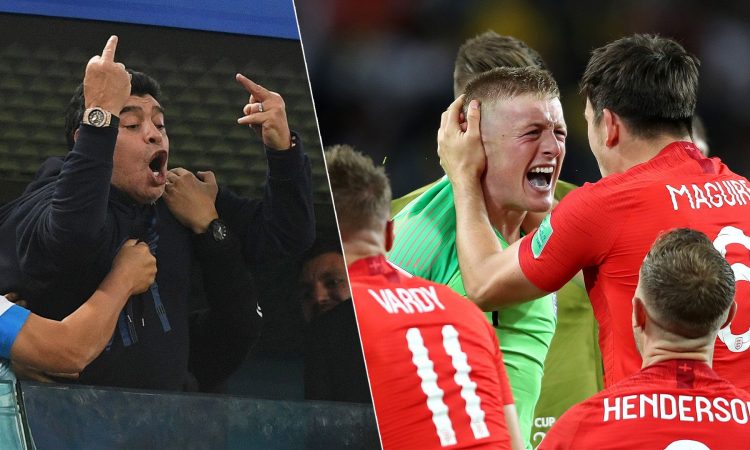 Argentina legend Diego Maradona believes Colombia were victims of a “monumental theft” in their World Cup last-16 defeat to England and laid into the performance of referee Mark Geiger.

Maradona, whose famous ‘Hand of God’ goal helped knock England out of the 1986 World Cup, nailed his colours to the Colombian mast after Argentina were eliminated at the hands of France and was pictured wearing the team’s jersey on social media.

However, Colombia’s hopes were ended by a 4-3 shoot-out loss, despite Yerry Mina’s second-half stoppage-time goal cancelling out Harry Kane’s penalty to earn a 1-1 draw after extra time.

Speaking to teleSUR, he said: “I saw a monumental theft on the pitch. I apologise to all the Colombian people, but the players are not to blame for this.

“Here is a gentleman [Collina] who is the one who decides to choose a referee by just googling him. He cannot be put in to referee a match of this magnitude.”

Maradona, whose celebration of Argentina’s dramatic win over Nigeria that sealed a place in the knockout stages will provide one of the lasting memories of Russia 2018, was particularly scathing of Geiger’s decision to award a spot-kick to England when Kane was dragged to ground by Carlos Sanchez.

When asked what his biggest objection was, he replied: “The penalty. The penalty was not a penalty.

“It was Kane’s fault. The rules allow for VAR assistance, yes or no? Why did he not ask for the VAR? It is not possible, this has to be denounced.

“Twice the English threw themselves to the ground and he did not admonish them. This was theft.”