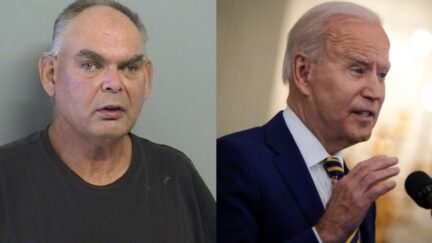 John Jacob Ahrens, 58, of Tulsa, has been indicted by a grand jury for threats made against President Joe Biden.

Ahrens is charged with threatening to kill the President of the United States. He is also charged with generating a threatening email sent to KOTV Channel 6 on June 10, 2021, stating “America is going to get to see a sitting President get his head blown off right in front of them. A kill contract went out on one Joseph Biden, President of the United States of America. America is going to watch him die right in front of them.”

In Count 3, he is charged with sending a threatening email on May 10, 2021, stating “I tried to contact you earlier but the Feds shut me down they got a little up tight because I informed the men of the United States Congress if they didn’t hand my money over in less than 48 hours. I will have their children killed. If that doesn’t get the message across. Then I start on their women….”

On May 10, 2021, Ahrens sent a message stating, “Please go to my Facebook page and read what I sent to the men of the United States Congress. They have less than 48 hours to hand over my money or their children will start dying all over the country. I’m going to kill their children using the same law as the Government used to force our families on to the Trail of Tears.”

In a June 17 message, he wrote “You have until Monday morning 8:00 am sharp to hand a check over to the State of Oklahoma, the Muscogee Nation and my family in accordance with a signed agreement as set forth in the Treaty of 1866.”