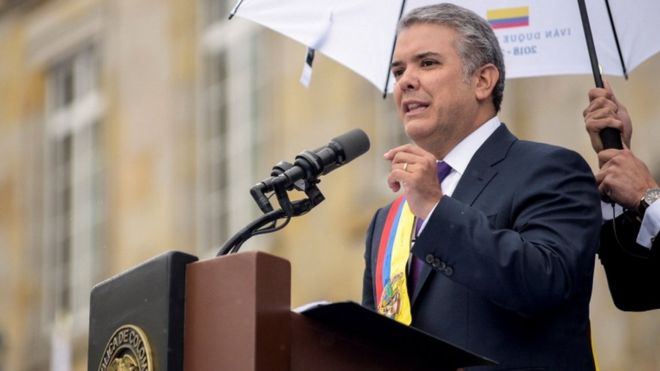 The conservative political newcomer was elected in June after a divisive election campaign where he saw off left-wing rival Gustavo Petro.

In his inaugural address, the former lawyer pledged changes to tackle corruption and invigorate the economy.

The leader has also vowed to change the peace deal with the Farc rebel group.

The outgoing President Juan Manuel Santos has urged Mr Duque to respect the deal, which was negotiated in 2016 to bring an end to the country’s brutal five-decade civil conflict.

The Farc, or Revolutionary Armed Forces of Colombia, is now a political party known as the Revolutionary Alternative Common Force. A number of its members took up seats in parliament last month as part of the terms which guarantee it political representation.

Mr Duque has said he remains committed to Colombia’s peace process, but says that it is too lenient on former guerrilla fighters accused of war crimes.

“We will deploy corrective measures to ensure that the victims get the truth, proportional justice, reparations and no repetitions of the past,” the new president said in his address on Tuesday.

Mr Duque also spoke about the need to heal the country after a divisive election campaign earlier this year.

His political platform is considered business-friendly after he pledged to cut taxes and boost investment in Colombia’s economy.

Mr Duque, who at 42 is the youngest Colombian to be president in the modern era, was handpicked as party leader by founder Álvaro Uribe Velez, who himself was president from 2002 to 2010.

Mr Uribe remains active in politics, but resigned from his senate seat in Julyto face a bribery and fraud investigation in the Supreme Court.

The new president assumes power at a time of heightened tension with neighbours Venezuela. Earlier this week President Nicolas Maduro accused the outgoing Colombian President Juan Manuel Santos of being responsible for an apparent attempt to assassinate him at a military event in Caracas.

The allegation was described as “baseless” by Bogota.