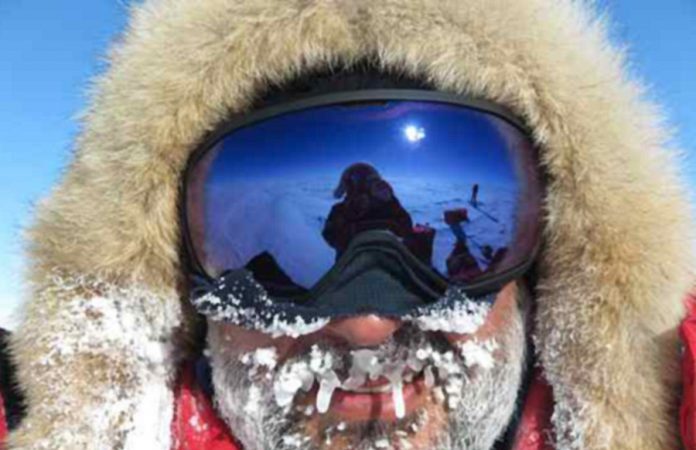 On December 18, Abbas Jafarian and his two South American companions reached the South Pole after a nine-day trek on skis. Their Antarctic expedition began on December 4, when they boarded an Ilyushin IL-76 freight-plane in Chile, which flew them to the ice-covered southern continent.

After a few days of acclimatization at Union Glacier, they took a smaller plane to the 89th parallel, where they began their 69-mile (111-km) trek to the most southerly point on Earth – each pulling sleds and equipment weighing 132lbs (60kg).

Funds raised from the walking expedition will benefit charities active in Iran including the Popli Khalatbari Charity Foundation (PKCF).

Before their expedition left Chile, Kayhan Life interviewed Jafarian about his voyage of discovery and what he hoped to achieve with it.

It is rare to hear of Iranians taking a trip to the South Pole. Why did you decide to go on this journey?

As I reached my 50th year milestone last February, I had the idea of a once-in-a-lifetime adventure that would motivate me and show myself and those around me, especially my sons, that if you put your mind to it, anything is possible. So after a few Discovery Channel videos and chatting to some people, I decided to embark on a trek to become the first Iranian* to Walk/Ski the last 60 nautical miles (69 mi/111 km) to reach the most southerly point on Earth, where temperatures are about -40 ºF (-40 °C) at this time of year.

Until recent years, the area around 90° South was the exclusive preserve of scientists based at the American Amundsen-Scott research compound. It has now become a destination for adventure travelers, who fly in for short, symbolic visits to the South Pole. The “Last Degree” trek, however, included all the challenges and dangers faced by pioneering Antarctic explorers such as Robert Scott and Roald Amundsen.

What are the weather conditions going to be like, and do you have any sense of trepidation about this trip?

Antarctica has the coldest and driest climate on Earth. Antarctica’s lowest* air temperature record was set on 21 July 1983, with -89.2 °C (-128.6 °F) at Vostok Station. On most parts of the continent, the snow rarely melts, and is eventually compressed to become the glacier ice that makes up the ice sheet. Weather fronts rarely penetrate far into the continent, because of the katabatic winds [drainage winds that can sweep down high slopes at hurricane speeds]. Although we are attempting this trek during the summer season here (from November to January), the temperature is still usually around -40°C.

However, other hazards face trekkers at the bottom of the planet. The ground on the South Pole is near sea level, but the actual altitude on the Polar Plateau, given the ice build-up, is about 2,800 meters. Becoming acclimated to the thinner air of higher altitude is made worse by the phenomenon of the Earth’s rotation, dropping air pressure to what would be expected at 3,350 meters.

Obviously, we have trained very hard and have very good logistical support, but ultimately you are alone on the Antarctic ice, a four-hour flight away from the base camp and with limited ability for them to reach you in case of real medical emergencies.

What type of training did you undertake and for how long? Are you a sportsman by nature and do you participate in any other sports?

You need to be extremely fit to undertake this trek, as you are also pulling a sled weighing up to 60 kilos for [12.4 miles] 20km a day for up to eight hours. I have been training for this trek for the last 10 months by undertaking [6.2 mile] 10km and 20km running sessions and strength training in the gym, but mainly by pulling a big tire weighing up to [44lb] 20 kilos over many different surfaces to simulate the conditions we will be facing. I also followed a specific 12-week training program designed by ALE [The Antarctic Logistics and Expedition Company] to prepare specifically for the physical challenges of the South Pole.

I am a keen sportsman by nature, and have very good Nordic skiing experience. I am also a keen cyclist as well as playing tennis and golf.

How was this trek arranged and how many people are part of your group?

I am doing this trek with two of my close friends, Jose Francisco Arata, from Venezuela and Juan Pablo Montejo, who is also aiming to become the first Colombian to walk to the South Pole. Unlike myself, both Jose and Juan are very experienced climbers and have done many expeditions including some of the “seven summits.” An experienced guide will also accompany us from The Antarctic Logistics and Expedition Company based out of Salt Lake City in the US.

Juan Pablo works for the Discovery Channel and is using this opportunity to produce a documentary to raise awareness about Antarctica’s pristine and delicate environment and the need to protect it at all costs.

You are dedicating this trek to charities benefiting Iran. How did this idea come about and do the sanctions pose any obstacles?

I wanted my South Pole trek not just to be a personal adventure and but also a conduit to make a small difference to kids with very little hope or opportunity, to help their education and provide a safe environment for them to grow up, just as my children have. I hope that by being the first Iranian to make such a journey to the South Pole, I will inspire and motivate others to give more of their time and energy to supporting those less fortunate than themselves. My idea was: we can’t help everyone, but everyone can help someone.

Both of the charities I have chosen are registered with UK charity organizations and are subject to audit etc.

The idea is to raise money and help as many children as possible, so I am sure that there are US-based charities that have their own programs for making such contributions. If my trek as an Iranian to undertake such a journey can motivate people to help outside of my fundraising activities, then I am just as proud and humbled by their generosity.

Which charities and organizations will benefit from the proceeds and how did you decide which ones to choose?

I have chosen The Popli Khalatbari Charitable Foundation (PKCF) to be the recipient of my fundraising activities as it supports charitable causes worldwide with a particular focus on the welfare and education of children. Founded in 1998, PKCF strives to bring hope and opportunity to the disadvantaged through the establishment and ongoing support of orphanages, vocational schools, hospitals, and medical funding.

Over the past 20 years they have achieved their goals by devising and implementing their own projects as well as funding existing programs run by reputable organizations across the globe.

I am also supporting the Doostan Charity, a registered charity in England and Wales. It was established to promote and raise funds for building schools in the remote and deprived regions of Iran.

I have also set up a page to help raise my target of 25,000 pounds sterling.

What is your relationship with Iran and when was the last time you were there?

Being born and brought up in Iran until my early years means that I still have a very strong bond of being Iranian and very proud of my heritage and culture. Iranians and our culture have contributed on many different levels to the world, including in areas such as mathematics, science, poetry and art. I try to teach my sons about the importance of their heritage and what it represents on a global and historical level.

I travel to Iran regularly to visit my friends and family.

Can you tell our readers about your background?

I was born in Iran and spent my early childhood there, in a house overlooking the beautiful snow-capped Alborz Mountains. I attended the Rustam Abadian International School until the age of 11 and moved to the UK in 1979, where I finished my secondary education. I did my undergraduate studies at the University of Kent in Canterbury in International Relations and Management Science. I received my MBA from the London Business School in 1998 and am also a member of the Institute of Chartered Accountants in England and Wales.

My father was an architect in Iran and specialized in building and designing hospitals, one of them being the 1,000-bed teaching hospital in Mashhad. My mother studied archaeology. I am the youngest of four children, and have two older brothers and a sister who is also an architect in San Francisco.

I am married and have two boys aged 17 and 13, and attend Charterhouse School and Wetherby Preparatory school respectively. My wife, Maria Irene, is from Venezuela.

In 2007 I co-founded Black Pearl Capital with my partner, Reza Irani. We are a Swiss-based asset management and investment company operating out of Geneva, but with offices in London, Hong Kong and Dubai.

I have over 25 years’ experience in the finance field and previously co-founded property and asset advisory firm Symphony Partners Plc, where we sourced and structured real estate and private equity deals within the Eurozone area. During this time, I sat on the investment committee of several investment trusts, advising them on investment strategy and asset allocation. I was previously an investment executive with Morgan Stanley and have worked at Deloitte and Arthur Andersen.

Part of my responsibility is to run Black Pearl Capital’s private equity fund, where we oversee a global portfolio of investments spread over four continents and spanning numerous industries including Financial Services, Real Estate, Natural Resources, Technology and Entertainment. We are currently engaged in a major UK project where we are constructing over 3,000 homes in the UK [to tackle] the current housing shortages.

What is next for you after this trek? Are you considering any other expeditions?

I don’t want to think that far ahead, as I am replying to these questions from Punta Arenas in Chile, the southernmost city in the world, and I still have three weeks to reach the bottom of the world! So my priorities don’t extend beyond the next three weeks. However, if I catch the exploration bug, then walking to the North Pole would be the next natural challenge.

*According to NASA satellite data, newly analysed and released on December 9, Antarctica’s lowest air temperature record was broken in August 2010 when it bottomed out at -135.8 ºF (-94.7 ºC).