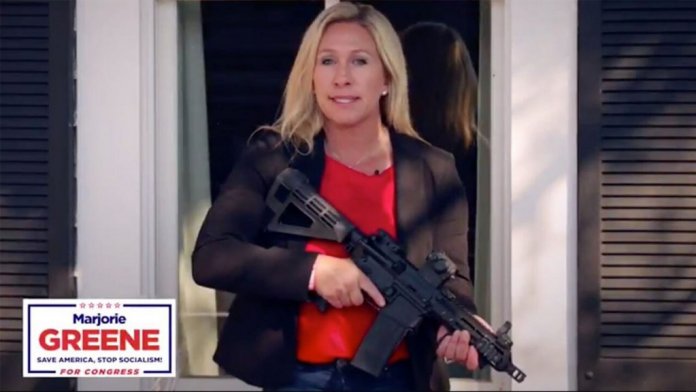 On Thursday, all House Democrats and 11 members of the GOP voted to remove Republican congresswoman Marjorie Taylor Greene from her committee assignments. Green has been under scrutiny for comments and social media posts she made before she was elected.

Green had embraced QAnon conspiracy theories, questioned the legitimacy of the 9/11 terror attacks — and even suggested the Parkland school shooting was a “false flag” operation.

Leader Hoyer during debate on Rep. Marjorie Taylor Greene (R-GA): "I urge my colleagues to look at this image."

“This is an AR-15 in the hands of Ms. Greene. This was on Facebook. ‘The Squad’s worst enemy; AR-15 in hand’ — I have never, ever seen that!”pic.twitter.com/O1FKLayfZ3

Thursday morning, Rep. Greene stood on the house floor and expressed regret for her past remarks without directly apologizing.

"I know the fear that David Hogg had that day" pic.twitter.com/pT2hds0fGa

House Republican leader Kevin McCarthy has been under intense pressure to punish Greene or call on her to resign her elected House seat.

The 11 Republicans voting with Democrats to remove Rep. Greene from her committee assignments: