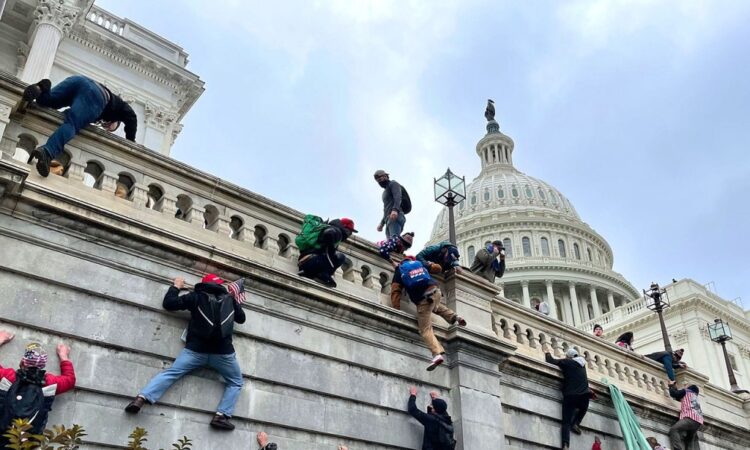 The FBI’s Washington Field Office has released new information and videos of suspects in  assaults on federal officers during the riots at the U.S. Capitol on January 6, 2021, and is seeking the public’s help to identify them.

With the assistance of hundreds of thousands of tips from the American people, the FBI has arrested more than 300 individuals who took part in the Capitol riots. Of those, more than 65 were arrested for assaulting law enforcement officers. However, some of the most violent offenders have yet to be identified, including the 10 seen assaulting officers in the video footage released today.

“The FBI is asking for the public’s help in identifying 10 individuals suspected of being involved in some of the most violent attacks on officers who were protecting the U.S. Capitol and our democratic process on January 6,” said Steven M. D’Antuono, assistant director in charge of the FBI’s Washington Field Office. “These individuals are seen on video committing egregious crimes against those who have devoted their lives to protecting the American people.

“We’re grateful to the members of the public who have already been a tremendous help in these investigations,” ADIC D’Antuono said. “We know it can be a difficult decision to report information about family, friends, or coworkers, but it is the right thing to do, and the FBI continues to need your help to identify these suspects.”

If you have any information on the individuals depicted in the videos below, please call 1-800-CALL-FBI or submit a tip online at tips.fbi.gov. Please reference the AFO number when calling or submitting information online. To view photos of additional individuals the FBI is seeking to identify, visit fbi.gov/capitolviolence.

share on Facebookshare on Twitter
MUST WATCH: Rand Paul SNAPS at Dr. Fauci over masks
LIVE: Biden Speaks From The White House