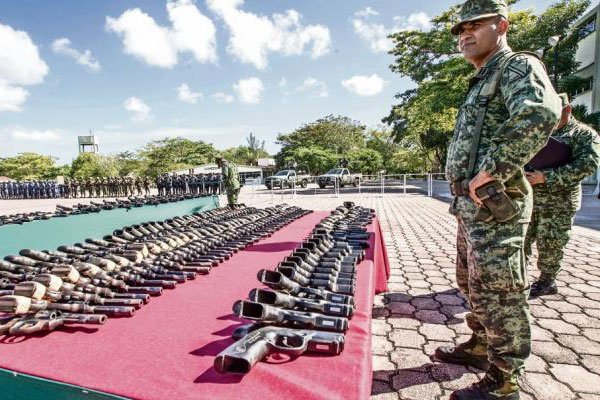 Mexico’s tourism hotspots were already seeing visitor numbers drop due to the impact of violent crime, and with the coronavirus keeping more people away, it may be difficult to turn this situation around.

This year, various forms of violence have plagued Mexico’s iconic Riviera Maya, which includes famous spots such as Cancún and Playa del Carmen along the Atlantic Ocean. Firstly, a number of political assassinations have shaken the region. On April 6, Obed Durón Gomez, mayor of Mahahual, an important resort town, was gunned down at a quarantine roadblock intended to slow the spread of the coronavirus, La Jornada reported.

Although his killers remain unidentified, authorities have reportedly focused their investigation on threats the mayor had received from organized crime groups who sought to intimidate him into lifting the quarantine that had hampered their drug trafficking, Milenio reported.

Durón Gomez is the third local politician to be murdered in the Riviera Maya this year. In January, Luis Alfredo Flores Manzanilla, a local Labor Party (Partido del Trabajo – PT) coordinator, was assassinated in the popular tourist town of Tulum. In February, Román Guzmán González, a former deputy for the Party of the Democratic Revolution, was killed in his ranch outside Bacalar, a seaside resort near the Belizean border. The motives behind these two killings remain uncertain.

And in September 2019, the commander of the state police of Quintana Roo was murdered, allegedly by members of the Jalisco Cartel New Generation (Cartel Jalisco Nueva Generación – CJNG), Animal Politico reported.

The Riviera Maya is also an important stop along the northward transit of drugs to the United States. On January 27, the area was the scene of a dramatic clash between government forces and drug traffickers over a drug flight that landed on the highway outside of Chetumal. One soldier was left dead, three were injured — including a high-level general — and two traffickers were arrested.

The following day, another drug plane was forced to land near Mahahual carrying $9 million worth of cocaine from Salta, Argentina. Between January and August 2019, Mexico’s Defense Ministry detected over 100 such flights in the state of Quintana Roo, according to media reports.

By examining crime data and tourist numbers, public policy think-tank México Evalúa found that mounting violence in tourist regions is a nationwide challenge. In an April 2019 report, the group concluded that there were four regions where violent crime and tourism converged: Central Mexico, the northwest border with the United States, the south-central Pacific coast and the Riviera Maya.

This has begun taking a toll. Visitor numbers to Cancún dropped for the first time in seven years in 2019 due to crime, according to an El Universal analysis. The rise in violence has led to constant negative travel advisories by foreign countries, according to media reports.

And now, seasonal tourists in Mexico have all but disappeared due to the coronavirus pandemic. Even those who remain are not welcome. In destinations throughout the country, locals have reportedly erected makeshift barricades to keep visitors away, afraid that they may bring the deadly virus with them.

Mexico has long sought to maintain an increasingly transparent illusion that its tourism hotspots are somehow isolated from the generalized violence in the country, especially the Riviera Maya. That is now shattered.

The Riviera Maya is not the first Mexican tourism destination to suffer the impact of violent crime. Former tourist idyll Acapulco has seen a precipitous fall from grace, from a go-to luxury destination to one of the most violent places on earth. Violence also suddenly spiked in the Pacific resort of Los Cabos, which in 2017 recorded the highest homicide rate in the world at around 111 murders per 100,000 inhabitants, according to a Mexican non-governmental organization.

While the situation in the Riviera Maya is not at that dire level yet, the state of Quintana Roo saw homicides and violent crime rise sharply in 2019, according to the Mexican government’s national security report.

But the situation tourism destinations like Cancún now face is entirely new. Any attempts to restore its reputation have been stymied by the coronavirus lockdown.

Worse, the absence of tourists is likely to have drawn police resources away from combatting organized crime to help enforce the lockdown. All of Mexico is contending with a growing pandemic and Quintana Roo has an infection rate far higher than most of the country.

And organized crime does not seem to be respecting the quarantine. Since the lockdown began, drug seizures and piracy attacks out at sea have continued. An entire cell of the CJNG was even reportedly dismantled, according to Quintana Roo’s Attorney General Oscar Montes de Oca Rosales.

“The criminality statistics in a state are one thing, and the insecurity that you will face in a given resort is quite another,” according to de la Madrid. The sentiment that, while violence may affect locals, tourists are rarely a target, is echoed by guidebooks and think-tanks alike.

Cancún is optimistic and already planning a post-coronavirus tourism campaign starting in June 2020. But for the time being, it is hard to blame visitors for their fears.

share on Facebookshare on Twitter
Venezuela: 2 US ‘mercenaries’ among those nabbed after raid
Bronx motorcycle gang leader, 51, shot dead in broad daylight by two assassins using silencer pistols – as his loved ones mourn family man with ‘heart of gold’