Colombia: thousands take to the streets in third national strike in two weeks 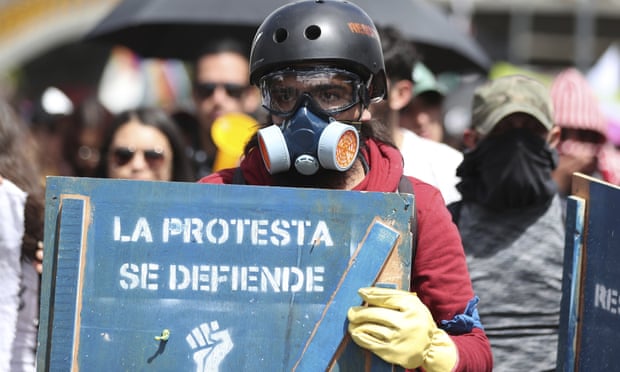 Colombians have taken to the streets for a third national strike in two weeks, piling more pressure on the unpopular rightwing president, Iván Duque, and his proposed tax reforms.

Thousands thronged the streets of Bogotá, the capital, shutting down much of the city’s historic centre, indicating that the unrest will continue while Duque engages in a “national dialogue” with strike organisers.

“We’ll be out on the streets until Duque listens to us,” said Andres López, a student at a gathering on one of Bogotá’s main commercial streets. “We’re not scared of the government.”

Hundreds of thousands of people joined the first national strike on 21 November, and have turned out in daily demonstrations since then, initially sparked by proposed cuts to pensions.

Though that reform was never formally announced, it became a lightning rod for widespread dissatisfaction with the government of Duque, whose approval rating has dropped to just 26% since he took office in August last year.

Protesters are also angry at the lack of support for the historic 2016 peace deal with the Revolutionary Armed Forces of Colombia (Farc), which formally ended five decades of civil war that killed 260,000 and forced more than 7 million to flee their homes.

Others are protesting in defense of indigenous people and rural activists, who continue to be murdered at alarming rates. A recent airstrike against a camp of dissident rebel drug traffickers left at least eight minors dead, adding to protesters’ fury.

While most of the protests have been peaceful, some property was vandalised when the demonstrations first broke out. Police have often responded with teargas and “less lethal” bean bag rounds and flash bangs.

One 18-year-old protester, Dilan Cruz, was killed by riot police after being shot in the head with a bean bag on 23 November. The incident infuriated demonstrators and led strike organisers to demand the dismantling of Esmad, Colombia’s feared riot police squadron, who they accuse of readily using excessive force.

Four others have also died across the country in connection with the protests.

The rage could be felt on Wednesday as protesters shouted “murderers” as they marched past police officers.

Strike organisers are also demanding the scrapping of proposed economic reforms and that the government honour the peace deal.

Despite the ongoing demonstrations, some analysts suspect that Christmas could offer Duque a much-needed reprieve.

“The protests will take a break for the holiday season, unless something egregious happens, and are likely to pick up in the new year,” said Sergio Guzmán, the director of Colombia Risk Analysis. “The big risk is if the protests transcend their urban nature and spill over into rural areas.”

share on Facebookshare on Twitter
Learn about Christmas trends with Eclipse Design
Black and White, trend in luxury furniture