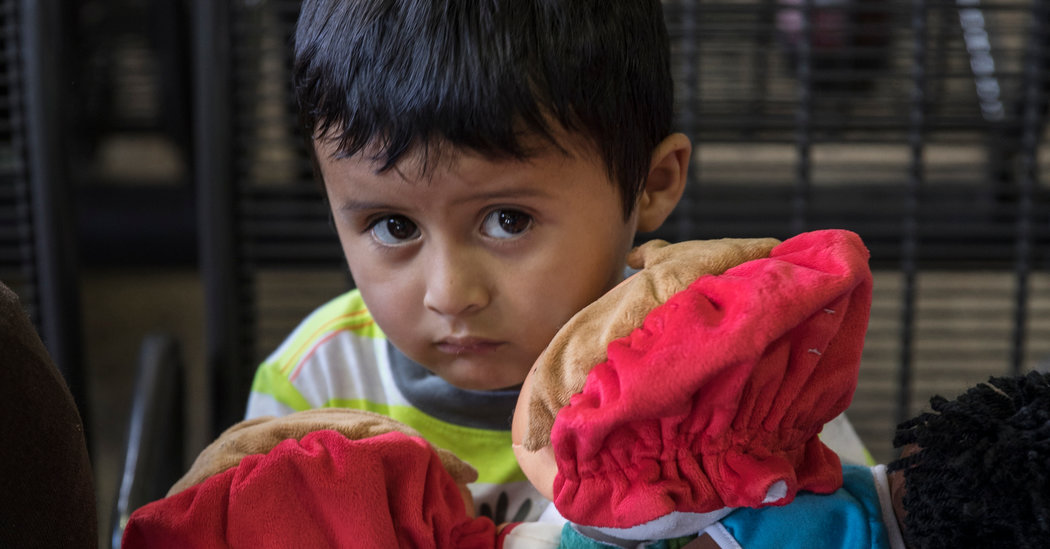 Do not misbehave. Do not sit on the floor. Do not share your food. Do not use nicknames. Also, it is best not to cry. Doing so might hurt your case.

Lights out by 9 p.m. and lights on at dawn, after which make your bed according to the step-by-step instructions posted on the wall. Wash and mop the bathroom, scrubbing the sinks and toilets. Then it is time to form a line for the walk to breakfast.

“You had to get in line for everything,” recalled Leticia, a girl from Guatemala.

Small, slight and with long black hair, Leticia was separated from her mother after they illegally crossed the border in late May. She was sent to a shelter in South Texas — one of more than 100 government-contracted detention facilities for migrant children around the country that are a rough blend of boarding school, day care center and medium security lockup. They are reserved for the likes of Leticia, 12, and her brother, Walter, 10.

The facility’s list of no-no’s also included this: Do not touch another child, even if that child is your hermanito or hermanita — your little brother or sister.

Leticia had hoped to give her little brother a reassuring hug. But “they told me I couldn’t touch him,” she recalled.

In response to an international outcry, President Trump recently issued an executive order to end his administration’s practice, first widely put into effect in May, of forcibly removing children from migrant parents who had entered the country illegally. Under that “zero-tolerance” policy for border enforcement, thousands of children were sent to holding facilities, sometimes hundreds or thousands of miles from where their parents were being held for criminal prosecution.

Last week, in trying to comply with a court order, the government returned slightly more than half of the 103 children under the age of 5 to their migrant parents.

But more than 2,800 children — some of them separated from their parents, some of them classified at the border as “unaccompanied minors” — remain in these facilities, where the environments range from impersonally austere to nearly bucolic, save for the fact that the children are formidably discouraged from leaving and their parents or guardians are nowhere in sight.

Depending on several variables, including happenstance, a child might be sent to a 33-acre youth shelter in Yonkers that features picnic tables, sports fields and even an outdoor pool. “Like summer camp,” said Representative Eliot L. Engel, a Democrat of New York who recently visited the campus.

Or that child could wind up at a converted motel along a tired Tucson strip of discount stores, gas stations and budget motels. Recreation takes place in a grassless compound, and the old motel’s damaged swimming pool is covered up.

Still, some elements of these detention centers seem universally shared, whether they are in northern Illinois or South Texas. The multiple rules. The wake-up calls and the lights-out calls. The several hours of schooling every day, which might include a civics class in American history and laws, though not necessarily the ones that led to their incarceration.

Most of all, these facilities are united by a collective sense of aching uncertainty — scores of children gathered under a roof who have no idea when they will see their parents again.

Leticia wrote letters from the shelter in South Texas to her mother, who was being held in Arizona, to tell her how much she missed her. She would quickly write these notes after she had finished her math worksheets, she said, so as not to violate yet another rule: No writing in your dorm room. No mail.

She kept the letters safe in a folder for the day when she and her mother would be reunited, though that still hasn’t happened. “I have a stack of them,” she said.

Another child asked her lawyer to post a letter to her detained mother, since she had not heard from her in the three weeks since they had been separated.

“Mommy, I love you and adore you and miss you so much,” the girl wrote in curvy block letters. And then she implored: “Please, Mom, communicate. Please, Mom. I hope that you’re OK and remember, you are the best thing in my life.”

The complicated matters of immigration reform and border enforcement have vexed American presidents for at least two generations. The Trump administration entered the White House in 2017 with a pledge to end the problems, and for several months, it chose one of the harshest deterrents ever employed by a modern president: the separation of migrant children from their parents.

This is what a few of those children will remember.

“Mommy, I love you and adore you and miss you so much,” the girl wrote in curvy block letters. And then she implored: “Please, Mom, communicate. Please, Mom. I hope that you’re OK and remember, you are the best thing in my life.”

The complicated matters of immigration reform and border enforcement have vexed American presidents for at least two generations. The Trump administration entered the White House in 2017 with a pledge to end the problems, and for several months, it chose one of the harshest deterrents ever employed by a modern president: the separation of migrant children from their parents.

This is what a few of those children will remember.

No Touching, No Running

Diego Magalhães, a Brazilian boy with a mop of curly brown hair, spent 43 days in a Chicago facility after being separated from his mother, Sirley Paixao, when they crossed the border in late May. He did not cry, just as he had promised her when they parted. He was proud of this. He is 10.

He spent the first night on the floor of a processing center with other children, then boarded an airplane the next day. “I thought they were taking me to see my mother,” he said. He was wrong.

Once in Chicago, he was handed new clothes that he likened to a uniform: shirts, two pairs of shorts, a sweatsuit, boxers and some items for hygiene. He was then assigned to a room with three other boys, including Diogo, 9, and Leonardo, 10, both from Brazil.

The three became fast friends, going to class together, playing lots of soccer and earning “big brother” status for being good role models for younger children. They were rewarded the privilege of playing video games.

There were rules. You couldn’t touch others. You couldn’t run. You had to wake up at 6:30 on weekdays, with the staff making banging noises until you got out of bed.

“You had to clean the bathroom,” Diego said. “I scrubbed the bathroom. We had to remove the trash bag full of dirty toilet paper. Everyone had to do it.”

Diego and the 15 other boys in their unit ate together. They had rice and beans, salami, some vegetables, the occasional pizza, and sometimes cake and ice cream. The burritos, he said, were bad.

Apart from worrying about when he would see his mother again, Diego said that he was not afraid, because he always behaved. He knew to watch for a staff member “who was not a good guy.” He had seen what happened to Adonias, a small boy from Guatemala who had fits and threw things around.

“They applied injections because he was very agitated,” Diego said. “He would destroy things.”

A person he described as “the doctor” injected Adonias in the middle of a class, Diego said. “He would fall asleep.”

Diego managed to stay calm, in part because he had promised his mother he would. Last week, a federal judge in Chicago ordered that Diego be reunited with his family. Before he left, he made time to say goodbye to Leonardo.

But because of the rules, the two boys did not hug.

Lessons in Math and Presidents

Yoselyn Bulux, 15, is a rail-thin girl from Totonicapán, Guatemala, with long dark hair and no clear memory of how she summoned the strength to climb the wall at the border. What followed was even harder: two days in a frigid processing center known as the “icebox,” then a two-day bus ride to a large facility somewhere in Texas. Her mother stayed behind in Arizona.

The new place had air-conditioning, but wasn’t as cold as the icebox, which had left her with a sore throat. There were windows, sunlight during the day. And beyond the perimeter, tall grass like the “zacate” you see along the highway.

At the intake area of the facility, which seemed to accommodate about 300 girls — some of them pregnant — she was given some clothes and a piece of paper with a number on it. There were rules.

“If you do something bad, they report you,” Yoselyn recalled. “And you have to stay longer.”

The days had structure. Yoselyn took classes with other teenage girls in math, language — she learned “good morning,” “good afternoon” and “good night” in English — and civics, which touched on, among other things, American presidents. President Trump was mentioned, she said.

For an hour every day, the girls went outside to exercise in the hot Texas air. It was not uncommon to see someone suddenly try to escape. No whispers, no planning — just an out-of-nowhere dash for the fence. No one made it.

On Friday and Saturday nights, the girls watched movies. Also on Saturday, Yoselyn met with a counselor, whom she liked. They talked about her hope to be with her mother soon. She cried only twice.

But it wasn’t easy. Although Yoselyn spoke occasionally by telephone with her mother — the first time a full 10 days after their separation — the gossipy chatter among the girls could be confusing, and upsetting. “Some of the girls said we were going to get out,” she recalled. “Others said they were going to deport us.”