China will provide a $1 billion loan for Latin American and Caribbean countries to have access to its Covid-19 vaccine, Foreign Minister Wang Yi told top regional diplomats in a meeting, according to the Mexican government.

In a virtual gathering, Wang told his Latin American counterparts a vaccine against coronavirus developed by his country would have universal access, Mexico’s Foreign Affairs Ministry said in a statement late Wednesday. Wang also presented a list of Chinese projects to fight the disease in the region, according to the statement.

The announcement comes amid rising tensions between the U.S. and China, which is increasingly competing for influence in a region historically linked to American foreign policy. Latin America is currently the region hardest hit by the coronavirus, with Brazil, Mexico and Peru among the world’s top 10 countries by total Covid-related deaths.

China’s initiative to assist Latin American countries in the fight against the pandemic shows that the Asian giant seeks to distinguish itself from the U.S. and President Donald Trump’s approach, according to Oliver Stuenkel, a China expert at FGV, a Sao Paulo-based business school. 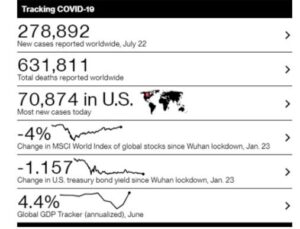 “While Trump’s priority has been getting privileged access to vaccines without leading any global effort against the pandemic, China is taking the opportunity to show it cares about other countries“, he said. “It wants to show that its ascension will bring advantages and benefits to others.”

Top diplomats from Argentina, Barbados, Chile, Colombia, Costa Rica, Cuba, the Dominican Republic, Ecuador, Panama, Peru, Trinidad and Tobago and Uruguay participated in the meeting, in addition to Mexico’s Foreign Minister Marcelo Ebrard and China’s Wang, according to the statement.

Absent from the meeting was Brazil, Latin America’s largest economy and the country most affected by the virus in the region. While China is Brazil’s top trade partner, the relationship between the two countries has grown increasingly uneasy as Brazilian officials and allies of President Jair Bolsonaro have blamed the Chinese for the pandemic and vowed to fully align with Trump.

Bolsonaro’s office and Brazil’s Foreign and Health ministries didn’t reply to requests for comment. The Chinese embassy in Brazil declined to comment on whether Brazil had been invited to the meeting.