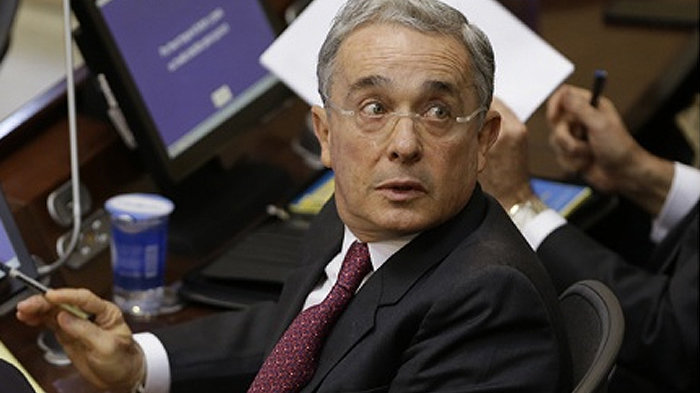 CARACAS, Venezuela — Álvaro Uribe, a powerful former Colombian president whose handpicked candidate for the presidency is the front-runner in coming elections, was repeatedly accused in communications to diplomats of having ties to drug runners, newly declassified cables from the State Department show.

The cables, which have recently been made available to The New York Times, describe meetings from 1992 to 1995 between American officials and Mr. Uribe when he was an up-and-coming politician, as well as information gathered from Colombian officials who knew him well. Members of the Liberal Party, where Mr. Uribe was a member, say he had ties to top drug families, including one who worked for kingpin Pablo Escobar.

The cables shed new light on allegations which have dogged Mr. Uribe for years. He has repeatedly issued blanket denials, saying the accusations reflect attempts by political rivals to undercut him.

Mr. Uribe, who over time has moved far to the right politically, now serves as a senator and may soon lead the conservative bloc which won the most seats this year in Colombia’s parliamentary elections. Iván Duque, Mr. Uribe’s protégé who he has supported in the presidential election, is running ahead of five other rivals in a first-round vote on Sunday.

One cable from 1993 described an embassy meeting with Luis Guillermo Vélez Trujillo, then a Liberal Party senator. The senator complained that the Ochoa Vásquez family — a top Colombian clan in Mr. Escobar’s Medellín Cartel — “had financed” Mr. Uribe’s political campaigns.

Alejandro González, another senator from Mr. Uribe’s party, told diplomats that Mr. Uribe “feared for his life because he was unable to deliver for his Medellín cartel mentors” on a promise to broker a deal between Mr. Escobar and the government for his surrender.

While the diplomats say they did not find hard evidence to back the accusations they received, they spent years collecting them and expressing concerns to American officials and diplomats.

“We still remain leary [sic] of Uribe’s own narco connections,” said one cable in 1992 where American diplomats discussed counternarcotics operations carried out with Mr. Uribe’s support.

And the Americans struggled to understand the motivations of a man who would be president — and has emerged again this year as his country’s kingmaker.

On the campaign trail, Mr. Duque has said Mr. Uribe, who cannot run for president again because of term limits, is the country’s “eternal president.”

“Álvaro Uribe transformed Colombian politics. His legacy is everywhere, and he remains an important political player,” said Michael L. Evans, a senior analyst at the National Security Archive, an investigatory nonprofit that provided The New York Times with the cables after petitioning that they be declassified.

He added: “In these cables we learn more about the allegations that most worried the Embassy: the aviation licenses for cartel figures; his financial ties to the Ochoa clan; and above all the possibility that he might be indebted to them.

Mr. Uribe served as president from 2002 to 2010 and was considered America’s closest ally in the region in the war against drug traffickers. He brokered a deal to demobilize paramilitary groups in 2004 and delivered the blows to leftist rebels that led to a peace deal under his successor in 2016. Both were financed by the cocaine trade.

But even today, questions persist about possible connections between Mr. Uribe and illegal activity.

Colombia’s Supreme Court has ordered an investigation into a witness-tampering case against Mr. Uribe involving the Bloque Metro, a paramilitary and drug trafficking group based in Medellín. Mr. Uribe’s brother, Santiago, is awaiting trial on charges that he ran a death squad called the Twelve Apostles from his ranch.

The American cables offer a window into the accusations Mr. Uribe faced during his political rise.

In the 1990s, a time marked by escalating drug violence and corruption in Colombia, Mr. Uribe emerged as a “young leader with a rosy future” and a “bright star on the Colombian political scene,” the diplomatic cables say.

However, diplomats also came across accusations that tarnished that reputation.

Mr. Vélez, the senator who said Mr. Uribe’s campaign was financed by the Ochoa drug family, told diplomats about a meeting that was arranged in the 1990s between Mr. Uribe and two other politicians and the wife of Mr. Escobar. The meeting had been secret until Mr. Escobar published a letter about it, and the diplomats wanted to know how it had come about.

Mr. Vélez said Mr. Escobar had used the Ochoas, lieutenants in Mr. Escobar’s Medellín Cartel, to broker the meeting “to open a communication channel to” César Gaviria, Colombia’s then-president, as a personal favor to them.

Asked by embassy officials about the meeting, Mr. Uribe said it had occurred and that he had expected to meet Mr. Escobar’s mother, not his wife, to discuss Mr. Escobar’s surrender, one cable said. “He absolutely rejects any thoughts of dialogue or concessions to Escobar,” diplomats wrote.

In another cable from March 1993, diplomats raised doubts about Mr. Uribe, citing his connection to Ernesto Samper, who became Colombia’s president in 1994. The cable said “there is substance to rumors” that Mr. Samper, Mr. Uribe and a third politician linked to Mr. Samper were linked to drug traffickers.

“Rumors of the involvement of these three with narcotics traffickers abound,” the cable said, adding that they believed Mr. Samper, if elected, would be soft on drug traffickers.

Diplomats were puzzled about the information they received, as Mr. Uribe met with them repeatedly to discuss plans for stopping drug trafficking.

A cable from July 1993 said: “Senator Uribe has proved an enigma to the embassy — his family ties to narcos (he is a cousin to the Ochoas) plus rumors from credible contacts taint him, but past declarations against the traffickers and vehement protestations to the embassy,” wrote diplomats, “say otherwise.”

A March 1995 cable describes information diplomats received around 1992 about an unsuccessful attempt by Mr. Uribe to nominate “a person associated with a known narcotics trafficking family” as his party’s candidate for mayor of Medellín. When that effort failed, Mr. Uribe then tried to nominate an uncle of Mr. Escobar, which was “also shot down,” the cable said.