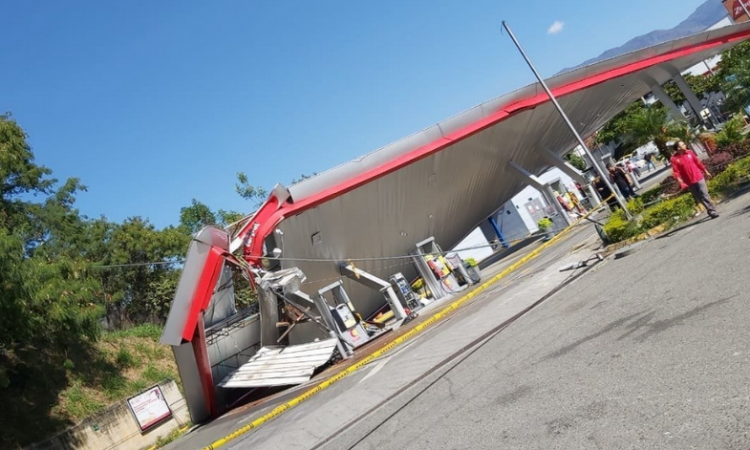 After 9:30 a.m. this Tuesday, the authorities ordered the closure in both directions of the North Highway, at the height of Zenú, after a cable that is being installed for the El Picacho metrocable fell to the road. The Medellín Metro reported that during the process of assembling the tractor carrier cable by the contractor, a part of it fell and caused damage to a gas station in the area.

The Administrative Department of Disaster Irrigation Management (Dagrd) coordinated the attention of the event. The agency reported that 10 people were injured after the incident.

The director of the Dagrd, Ricardo Mora, said that two of the injured were treated at the place, five others were transferred to health centers without “considerable injured,” and three more arrived directly at the hospital. The emergency was attended with three fire machines, 17 fire units and three ambulances.

About the incident, Mayor Daniel Quintero said that the cable was not broken but was released from tensioners that held it during the last stage of splicing with the main structure. “The one that was released was an auxiliary cable that is much thinner and is used only in the splicing process. The main cable is apparently in very good condition, which means that it will not affect the operation estimated for April 17 ”.

The work is now focused, Quintero said, in removing part of the main cable that is on the highway and in raising another point to reopen traffic on the road.

Tomás Elejalde, manager of the Metro, said that this is the first time this type of event has occurred in the construction of a metrocable and confirmed that the main cable did not break. “If it is in good condition, we can continue with the normal schedule. Everything will depend on a special inspection to verify the complete health of the cable with special equipment, ”he reported.

The El Picacho metrocable is under construction since January 2018 and is scheduled for commercial operation in May. It will be the sixth cable in operation in Medellín, after the first one was opened to the public 15 years ago.

However, Picacho has a particularity: it can transport 4,000 passengers per hour / direction, the maximum capacity for this type of technology in the world.

Tags :MedellínmetrocablePicacho
share on Facebookshare on Twitter
This is what INPEC found in the cell of Juan Monsalve, witness in case against Uribe
Tourism increases in Southwest Antioquia