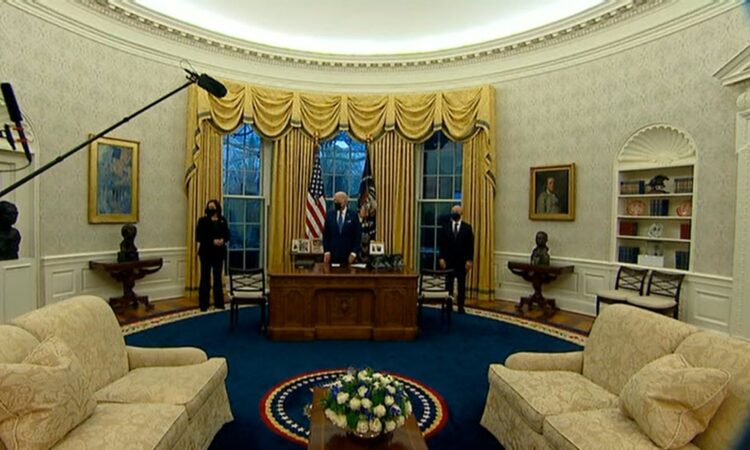 BIDEN: "There's a lot of talk, with good reason, about the number of executive orders that I have signed. I'm not making new law. I'm eliminating bad policy." pic.twitter.com/GGhUHoDZ3z

Here’s how the White House characterized the actions:

Create a Task Force to Reunify Families. President Biden believes that families belong together. He has made clear that reversing the Trump Administration’s immigration policies that separated thousands of families at the border is a top priority. A key part of this effort is the creation of a task force to reunite families that remain separated. This task force will work across the U.S. government, with key stakeholders and representatives of impacted families, and with partners across the hemisphere to find parents and children separated by the Trump Administration. The task force will make recommendations to the President and federal agencies regarding steps that they can take to reunify families. Further, the task force will report regularly to the President and recommend steps to prevent such tragedies from occurring again. This Order also revokes the Trump Administration’s Executive Order that sought to justify separating children from their parents.

Develop a Strategy to Address Irregular Migration Across the Southern Border and Create a Humane Asylum System. The Trump Administration’s policies at the border have caused chaos, cruelty and confusion. Those policies have undermined the safety of our communities, penalized asylum seekers fleeing violence, and destabilized security across the Western hemisphere. Today, the Biden Harris Administration will begin to roll back the most damaging policies adopted by the prior administration, while taking effective action to manage migration across the region.

Specifically, the Biden Harris Administration will begin implementing a comprehensive three-part plan for safe, lawful, and orderly migration in the region. First, the Administration will address the underlying causes of migration through a strategy to confront the instability, violence, and economic insecurity that currently drives migrants from their homes. Second, the Administration will collaborate with regional partners, including foreign governments, international organizations, and nonprofits to shore up other countries’ capacity to provide protection and opportunities to asylum seekers and migrants closer to home. Finally, the Administration will ensure that Central American refugees and asylum seekers have access to legal avenues to the United States. The Secretary of Homeland Security is also directed to review the Migrant Protection Protocols (MPP) program. The situation at the border will not transform overnight, due in large part to the damage done over the last four years. But the President is committed to an approach that keeps our country safe, strong, and prosperous and that also aligns with our values. This Executive Order also directs a series of actions to restore the U.S. asylum system, including by rescinding and directing agency review of a host of Trump Administration proclamations, rules, and guidance documents that have effectively closed the U.S. border to asylum seekers.

Restore Faith in Our Legal Immigration System and Promote Integration of New Americans. President Biden believes that immigrants are essential to who we are as a nation and critical to our aspirations for the future. The prior administration enacted hundreds of policies that run counter to our history and undermine America’s character as a land of opportunity that is open and welcoming to all who come here seeking protection and opportunity. This Executive Order elevates the role of the White House in coordinating the federal government’s strategy to promote immigrant integration and inclusion, including re-establishing a Task Force on New Americans, and ensuring that our legal immigration system operates fairly and efficiently. The order requires agencies to conduct a top-to-bottom review of recent regulations, policies, and guidance that have set up barriers to our legal immigration system. It also rescinds President Trump’s memorandum requiring family sponsors to repay the government if relatives receive public benefits, instructs the agencies to review the public charge rule and related policies, and streamline the naturalization process.