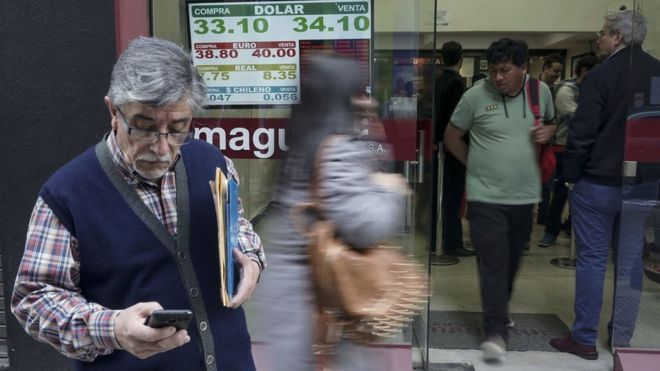 The value of Argentina’s peso continued to fall on Thursday, plunging by more than 13% after a 7% drop a day earlier.

The decline came despite the central bank’s effort to stabilise the currency by raising a key interest rate to 60%.

The bank said Thursday’s rate hike, from 45% to 60%, was a “response to the foreign exchange rate situation and the risk of greater inflation”.

It had already increased interest rates four times since April, most recently on 13 August.

The rate rises were prompted by the sudden weakening of the peso in April as a drought hurt farm exports, energy prices climbed and a stronger dollar led investors to pull funds from emerging markets.

The situation prompted President Mauricio Macri to seek funds from the International Monetary Fund in May.

At the time, he cast the request as a precautionary measure, but the economic turmoil has continued.

The peso has now fallen by more than 50% against the dollar this year.

The inflation rate is running at more than 30%, in part due to the government raising prices on gas and electricity as it tries to repair its finances.

The changes have made everyday life more expensive, causing families to scale back spending and contributing to a 6.7% slowdown in the economy in June.

On Wednesday Mr Macri asked the IMF to speed up its $50bn bailout and the fund agreed to revise the original plan, citing “more adverse” market conditions.

Interest rates of 40% already seemed like a bold idea back in May, when Argentina tried to stop a first run on its currency.

Getting 60% returns on loans seems like a fantastic business opportunity in any part of the world.

But not if investors believe the peso won’t be worth much a year from now, which is what is triggering the current devaluation.

Ultimately there is a lack of confidence in the government’s ability to do the reforms it promised the IMF.

The IMF’s director general is still sticking to Mr. Macri’s plan. But markets are not going along with them.

The move heightened investor fears about the country’s economy.

Argentina is in the middle of a pro-market economic reform programme, as Mr Macri seeks to reverse years of protectionism and high government spending under his predecessor, Cristina Fernandez de Kirchner.

The IMF said last month it expects Argentina’s economy to stabilise by the end of the year and a gradual recovery to begin in 2019.

But Mr Macri faces rising political opposition due to concerns about austerity measures.

His turn to the IMF was also unexpected as the organisation remains unpopular in Argentina due to the economic problems associated with earlier assistance.