Alleged members of the ‘Clan del Golfo’ in Bajo Cauca 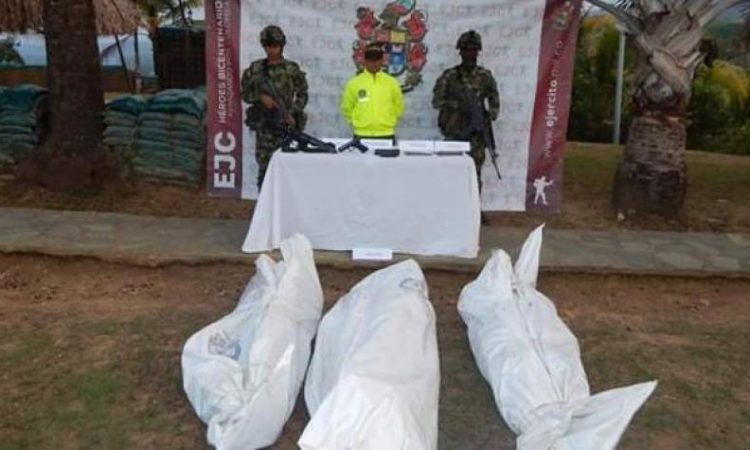 As a blunt action against the “command and control” of the ‘Clan del Golfo’ in the Antioquia Bajo Cauca, it was qualified by the Seventh Division of the National Army, the neutralization of 3 individuals who were allegedly part of this criminal organization. It happened in the midst of fighting in rural area of puerto Antioquia, in Tarazá, this on limits with the municipalities of Cáceres and Caucasia.

The dejected, who responded to the aliases of Yarumal, Cuco and Barranquilla were shot down, said Major General Juan Carlos Ramírez Trujillo, Commander Seventh Division, after a joint work between Army, Air Force, Navy, Police, Prosecutor’s Office and citizen information

“Alias Yarumal was the one who had cited local government authorities in the municipalities of Bajo Cauca, teachers, traders and ranchers, to demand extortion and participate in budgets and contracts of the municipalities,” the senior official said.

This subject, of whom he has not transcended his true identity, nor that of his henchmen, would be the leader of the urban commission of the substructure Julio César Vargas of the ‘Clan del Golfo’ or Self-Defense Pipers of Colombia (Agc). They have interference in the municipalities of  Yarumal, Tarazá, Valdivia and Briceño.

He had been in the organization for six years and would be in charge of extortion, kidnapping, torture and displacement, also pointing to his decay actions in Cáceres and Tarazá.

The neutralized were found war material, communication devices and elements alluding to the Gaitanists.