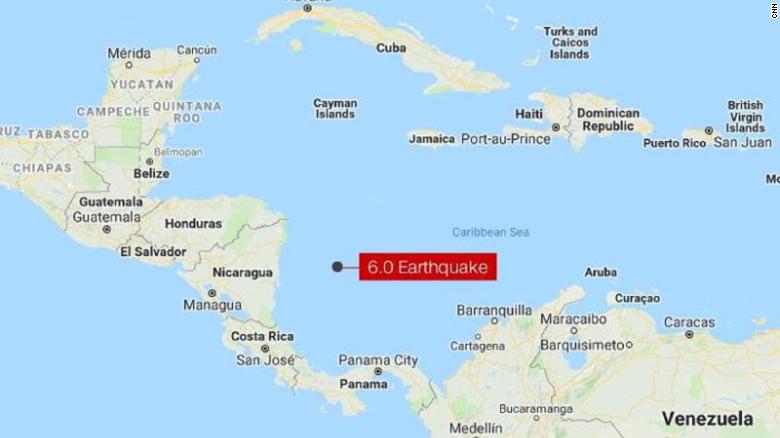 A 6.0-magnitude earthquake struck off the coast of Colombia on Saturday, according to a preliminary report from the US Geological Survey.

The quake struck in the Caribbean Sea near the island of Providencia and about 19.9 miles (32 kilometers) from Mountain, Colombia, according to the USGS.
The USGS also said the earthquake had a depth of 6.2 miles (10 kilometers). Earthquakes can occur anywhere from zero to 487 miles (800 kilometers) below the earth’s surface, according to USGS.
The National Tsunami Warning Center said the earthquake is currently not expected to generate a tsunami and there is no tsunami danger for the US east coast, the Gulf of Mexico, or the eastern coast of Canada.
Likewise, the governorship of the province of San Andrés Archipelago, Providencia and Santa Catalina, said no tsunami alarm has been issued for Colombia’s Caribbean coast, according to a tweet from Colombia’s National Unit for Disaster Risk Management (UNGRD).
Tags :Colombia
share on Facebookshare on Twitter
Is the paisa entrepreneurial spirit destined to remain within the valleys of Medellín?
Liverpool man jailed in Colombia over ‘double murder’ in Dominican Republic